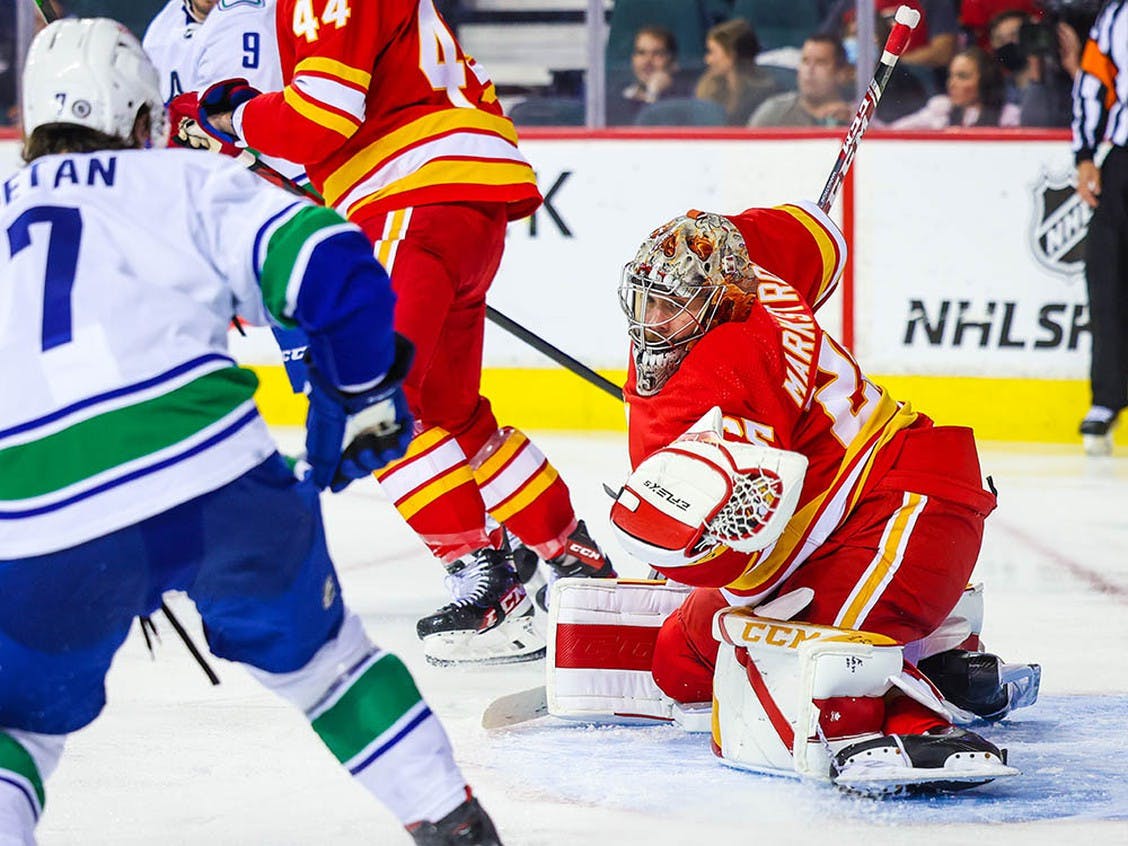 By Ryan Pike
11 months ago
Aside from the Edmonton Oilers, the biggest rival for the Calgary Flames (20-13-6, 46 points) is probably the Vancouver Canucks (19-19-5, 43 points). So it’s quite a weird scheduling quirk that Saturday night, in the 41st game for the Flames this season, is the first meeting between the two clubs this season. Vancouver’s had a challenging up and down season and swapped out coaches, while the Flames have been hot, cold, and occasionally riddled with COVID. We’ll see which version of these two clubs show up at puck drop.
This game gets going just after 8 p.m. MT. You can catch the action on CBC, Sportsnet’s national feed and City TV, and Sportsnet 960 The Fan.
For a look from the other side, check out Canucks Army!

Projected lines via Daily Faceoff:
Gaudreau – Lindholm – Tkachuk
Coleman – Backlund – Mangiapane
Lucic – Monahan – Dube
Lewis – Ruzicka – Ritchie
Hanifin – Andersson
Kylington – Tanev
Zadorov – Gudbranson
Jacob Markström starts for the Flames, backed up by Dan Vladar. The extras on the active roster are Michael Stone, Brad Richardson and Tyler Pitlick (who is reportedly dealing with a minor injury), while Connor Mackey and Byron Froese are on the taxi squad. The Flames make zero changes from their lineup from their prior three games.
The Flames have played generally well over the past five or six games. They’ve gotten good results in some of those games, but in some of their games they’ve had a challenge translating zone time and puck possession into scoring chances – and in turning scoring chances into goals.
The big challenge for the Flames this season, and right now, is secondary scoring. Their top line has been full marks in all three zones, and particularly the offensive zone. But they need more chances and goals from essentially everybody else wearing red.

Projected lines via Daily Faceoff:
Podkolzin – Miller – Boeser
Pettersson – Horvat – Garland
Motte – Lammikko – Highmore
Hoglander- Dickinson – Chiasson
Ekman-Larsson – Myers
Hughes – Schenn
Hunt – Juulsen
Thatcher Demko starts for Vancouver, backed up by Jaroslav Halak. Their active extras are Kyle Burroughs, Colton Poolman and Justin Dowling. Justin Bailey, Ashton Sautner, and Spencer Martin are on the taxi squad.
The Canucks have had a weird year. A bunch of players got hurt. A bunch of players got COVID. The entire team played like they were waiting for a coaching change. Then the coaching staff and general manager got the axe, being replaced by Bruce Boudreau (who’s 11-4-3 since arriving) and a gradually evolving group of smart hockey operations hires – most recently advance stats whiz Rachel Doerrie, ace agent Émilie Castonguay as an assistant general manager, and new general manager Patrik Allvin.
The creeping dread in Vancouver has been replaced by a sense of optimism, and that’s carried over onto the ice. They’re a fascinating group and one to keep an eye on over the remainder of this season.

The Flames are without Tyler Pitlick.
The Canucks are without Guillaume Brisebois, Brady Keeper, Brandon Sutter, Micheal Ferland, Travis Hamonic and Tanner Pearson.

The Flames faced the Canucks back in May, beating them 6-2. Their last three games in last year’s regular season actually took place during the Stanley Cup playoffs due to some rescheduling, because life during the pandemic is (at best) quite odd and bewildering.