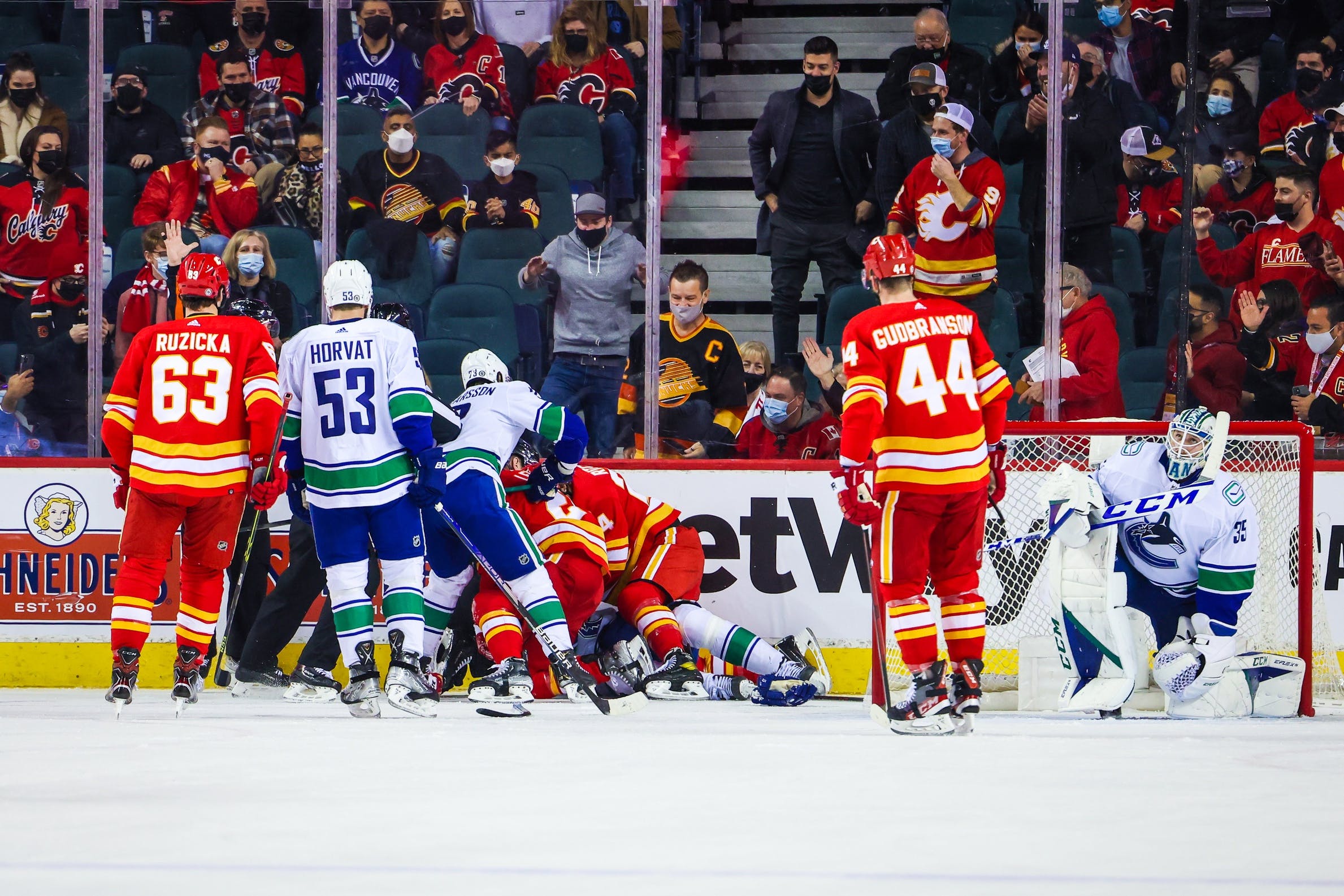 By Ryan Pike
10 months ago
Just 24 hours after being shut out for the second time this week, the Calgary Flames (37-16-8, 82 points) are back in action and hope to score some goals against the Vancouver Canucks (30-25-7, 67 points). The Canucks are three points out of a playoff spot and are trying to close the gap on free-falling Vegas, while the Flames are trying to get their mojo back after losing two of their last three games.
The puck drops just after 8 p.m. MT. Catch all the action on CBC, Sportsnet’s national feed, and City TV, or Sportsnet 960 The Fan!
For a view from the other side, check out Canucks Army!

Projected lines via Daily Faceoff:
@Johnny Gaudreau – @Elias Lindholm – @Tyler Toffoli
@Dillon Dube – @Mikael Backlund – @Matthew Tkachuk
@Andrew Mangiapane – @Calle Jarnkrok – @Blake Coleman
@Milan Lucic – @Sean Monahan – @Trevor Lewis
@Noah Hanifin – @Rasmus Andersson
@Oliver Kylington – @Chris Tanev
@Nikita Zadorov – @Erik Gudbranson
Update: New forward lines from warm-up! Vladar starts.
It’s a back-to-back with no morning skate, so we’re making some assumptions: most of the time, the Flames split up starts on a back-to-back: since @Jacob Markstrom was busy against Buffalo, it seems likely that @Daniel Vladar starts against the Canucks. The extras for the Flames are @Michael Stone, @Brett Ritchie and @Brad Richardson.
The Flames have been shut out twice in the past three games under two fairly different circumstances – the second half of a back-to-back in Colorado and the first half of one against Buffalo last night. In both games they struggled at times to gain the middle of the ice and generate chances from there, and this is probably something they’ll need to adjust to as we get into the final quarter of the season. If you let these guys wheel and deal in the middle of the ice, they’ll hurt you for it, and so the game-plan for most teams is “clog it up.”
The top line of Gaudreau, Lindholm and Tkachuk were quiet offensively against Buffalo. They’re very rarely quiet two games in a row.

Projected lines via Daily Faceoff:
@Tanner Pearson – @J.T. Miller – @Brock Boeser
@Vasily Podkolzin – @Bo Horvat – @Conor Garland
@Nic Petan – @Elias Pettersson – @Alex Chiasson
@Tyler Motte – @Juho Lammikko – @Matthew Highmore
@Oliver Ekman-Larsson – @Tyler Myers
@Quinn Hughes – @Luke Schenn
@Brad Hunt – @Travis Hamonic
@Thatcher Demko is expected to start for the Canucks, backed up by @Jaroslav Halak. Their extras look to be @Sheldon Rempal and @Noah Juulsen.
The Canucks have run hot and cold this season, but the arrival of Bruce Boudreau reset their team and since then they seem to have more urgency, more consistency and more swagger. It’s no coincidence that they’ve clawed their way back into the post-season mix. They jumped all over every mistake the Flames made in their last meeting, and with the Canucks desperate for points in the playoff race, this should be a tight-checking, intense game.

The Flames lost to the Canucks 7-1 in their last trip to Vancouver back in late February.