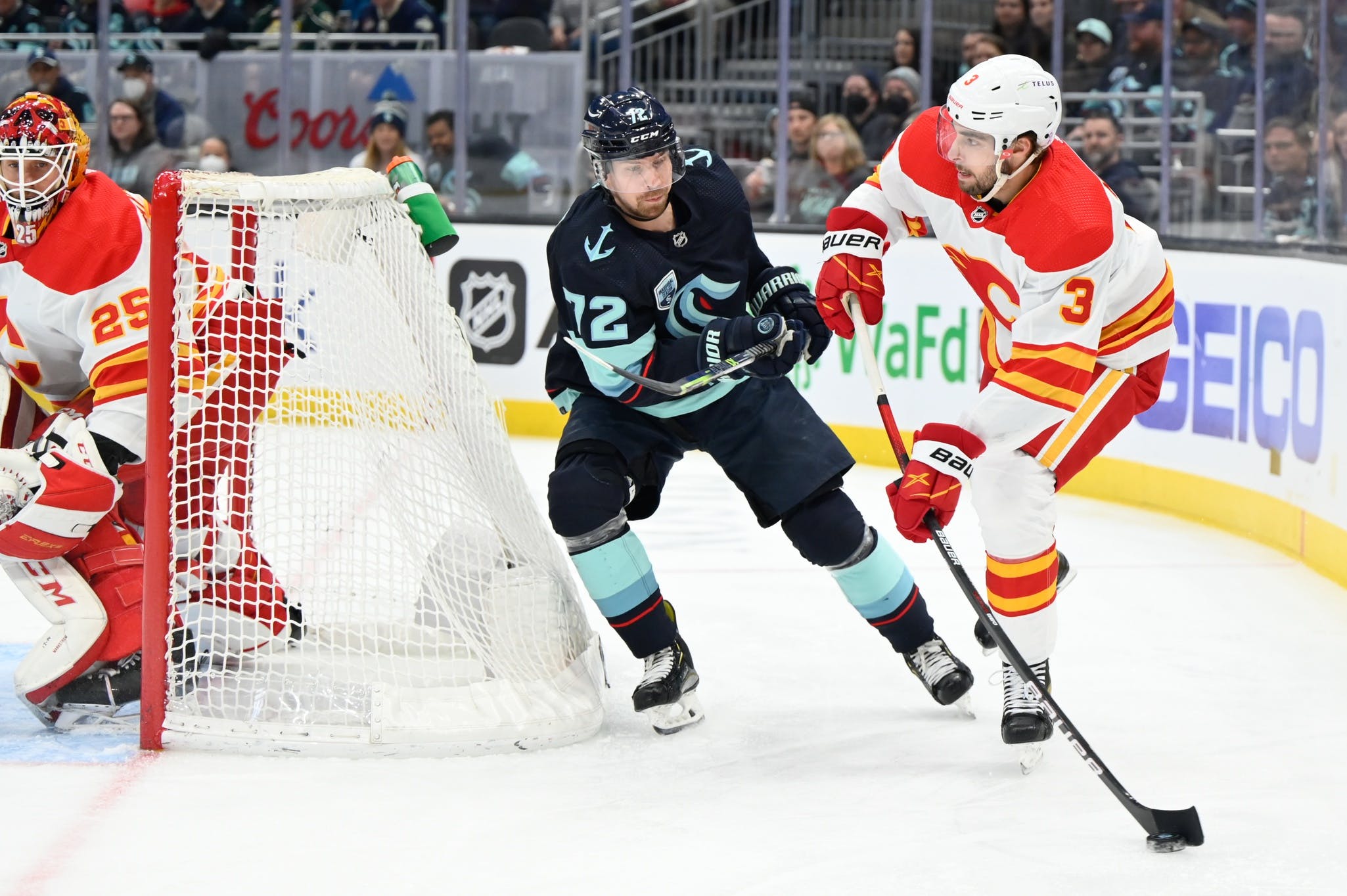 By Ryan Pike
9 months ago
History could unfold for both clubs involved on Tuesday night at the Saddledome! The Calgary Flames (44-19-9, 97 points) will try to creep closer to clinching a post-season berth, and star forward Johnny Gaudreau is pursuing his 100th point of the season. On the visitors side, the Seattle Kraken (23-43-6, 52 points) will see the debut of their first-ever draft selection, University of Michigan standout Matthew Beniers. It’s as noteworthy a game between the Pacific Division’s best and worst teams can be!
The puck drops just after 7 p.m. MT. Catch all the action on Sportsnet 360 or Sportsnet 960 The Fan! (Sportsnet West is carrying the Edmonton/Minnesota game.)

Projected lines via Daily Faceoff:
@Johnny Gaudreau – @Elias Lindholm – @Matthew Tkachuk
@Andrew Mangiapane – @Mikael Backlund – @Tyler Toffoli
@Dillon Dube – @Trevor Lewis – @Blake Coleman
@Milan Lucic – @Calle Jarnkrok – @Brett Ritchie
@Noah Hanifin – @Rasmus Andersson
@Connor Mackey – @Chris Tanev
@Nikita Zadorov – @Michael Stone
Based on Pat Steinberg’s reporting from the optional morning skate we’re expecting @Jacob Markstrom to start in net, backed up by @Daniel Vladar. The expected extras are @Ryan Carpenter and emergency recalls @Adam Ruzicka and @Juuso Valimaki. Not expected to play are @Oliver Kylington and @Erik Gudbranson, who have been out recently with illness and/or injury. (Kylington declared himself good to go after Monday’s practice, but seemingly he’s being held out.)
The Flames are trying to inch closer to clinching a playoff berth. And home ice in round one. And the Pacific Division crown. Head coach Darryl Sutter has the group focused on finishing high, which explains him leaning on Markstrom lately. He’s also balancing the defensive group’s health, with Kylington and Gudbranson perhaps not quite at 100%… or perhaps note quite up at game level yet. Or heck, maybe Sutter just wants to reward the six guys that played a good game against Seattle on Saturday with a second go at it. Considering the Flames will probably need to rely on Stone and Mackey if they go on a long post-season run, using them a couple more times before the playoffs begin seems like a prudent move.
@Johnny Gaudreau has 99 points. He was held off the scoresheet in Seattle, but with his parents in town and the Saddledome likely buzzing whenever he’s near the puck, it seems unlikely that he’ll be blanked again.

Projected lines via Daily Faceoff:
@Ryan Donato – @Matthew Beniers – @Jordan Eberle
@Victor Rask – @Alexander Wennberg – @Kole Lind
@Jared McCann – @Yanni Gourde – @Karson Kuhlman
@Riley Sheahan – @Morgan Geekie – @Joonas Donskoi
@Vince Dunn – @Adam Larsson
@Carson Sousy – @Cale Fleury
@Jamie Oleksiak – @William Borgen
@Chris Driedger starts for the Kraken, backed up by @Philipp Grubauer. The Kraken’s extras are @Derrick Pouliot and @Daniel Sprong. 2021 second overall pick Matthew Beniers is slated to debut on the top line for Seattle.
The Kraken are playing out the string and preparing for next season, with a bunch of new faces essentially trying out for jobs. As we saw on Saturday, they play a structured style of game and forecheck quite well. They just lack a lot of high-end skill, which makes it tough for them to eke out wins in tight games. The addition of Beniers should help at least a little bit in that respect.

The Flames are without Sean Monahan, Oliver Kylington and Erik Gudbranson.
The Kraken are without Brandon Tanev, Jaden Schwartz and Haydn Fleury.

The Flames have beaten the Kraken three times this season. The last time was on Saturday in Seattle.