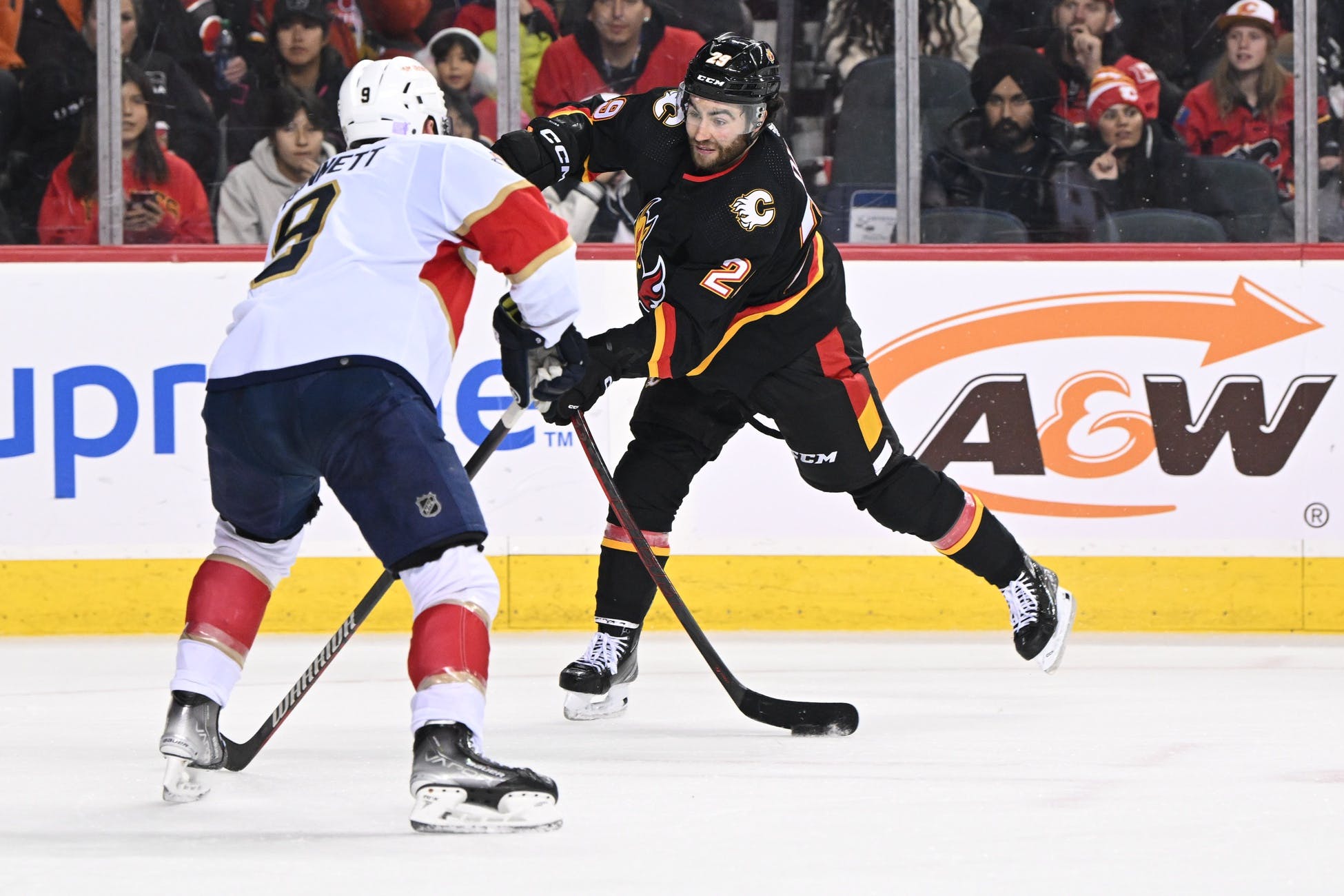 By Ryan Pike
2 months ago
The Calgary Flames just returned from a six game road trip where they did a lot of good things, but couldn’t find enough goals to win more than twice. On Tuesday night, they began a five game homestand and they scored a lot of goals.
The Flames out-scored Florida in all game situations – at even strength, on their power plays and on Florida’s power plays – in a 6-2 home win.
Flames head coach Darryl Sutter had a succinct summation of the game.
“We started with the lead and we kept the lead,” said Sutter. “So I’ll take it.”
The Flames scored first and held the lead for 56:55 of the game – all but the first 3:05. Sutter noted that the game was about “timely goals,” with the Flames often scoring at key times. After the Flames got up to a 3-0 lead, the Panthers were never able to get closer than two goals behind.
And when they did, the Flames scored again to give themselves additional breathing room.
For fun, let’s see what the Flames did well that led to their six goals.

With Blake Coleman in the box, the Flames sent out their penalty kill. The Flames have used Dube and Mangiapane as a duo on the PK frequently since last season, and they’ve combined for five shorthanded goals since being paired up. (This was their fifth.)
On the play, Mangiapane swipes the puck from Panthers forward Anton Lundell (via a pass from Sam Reinhart) and heads up ice, with Dube joining the rush. Mangiapane makes a nice move to get past Panthers defender Brandon Montour, then sets up Dube for a clear chance.

Sometimes, it helps to be lucky. On this play, with Radko Gudas in the penalty box for a minor, Rasmus Andersson fired the puck on net. There were a lot of players in front and the puck bounced around a lot, ending up on Jonathan Huberdeau’s stick. He hurriedly flung it on the net and it went in off a skate.
“I didn’t see anything,” said Huberdeau, of his goal. “I don’t know what happened. It’s a lucky goal, but we’ll take it.”

Rasmus Andersson (3rd of the season) assisted by Noah Hanifin and Dillon Dube, even strength, 12:03 into first period

This was a strong piece of puck management, as Nazem Kadri’s line got themselves into the Florida zone and held onto the puck. The puck eventually cycled to Hanifin at the left point and he quickly fired on net. Sergei Bobrovsky instinctively booted the puck out… right to Andersson, who pinched to grab the loose puck and fired it over the Florida netminder.

Brett Ritchie (5th of the season) assisted by MacKenzie Weegar and Trevor Lewis, even strength, 15:29 into second period

Florida had cut the lead to 3-1 at this point, but Ritchie made a nice effort to recover a wide shot from Weegar, out-battle Forsling for possession and threw the puck on net. Based on how Bobrovsky (mis-)handled the puck, it seems like he was caught off-guard and wasn’t quite expecting the shot.
(We can all giggle about the “inevitability” of Ritchie’s goals this season – it’s fun to see a depth guy on a league minimum deal score this much – but all his goals have been due to timing, positioning and hustle like this one.)

Tyler Toffoli (8th of the season) assisted by Jonathan Huberdeau, even strength, 15:22 into third period

By this point, Florida had cut the lead to 4-2 and while it didn’t seem like they were coming back, you couldn’t rule it out. At one end of the ice, Dan Vladar made a big stop on Sam Bennett and another one off a point shot from Forsling. Weegar collected the puck and sent it to the neutral zone, where a Toffoli pass sent Huberdeau in on a breakaway.
After Bobrovsky made the initial stop, Huberdeau out-battled Forsling and Carter Verhaege for the loose puck and sent it into the slot area, where Toffoli came in with a slapshot to beat Bobrovsky and reinstate a three-goal Flames lead.
“I had a breakaway,” said Huberdeau. “The puck was spinning a little bit on that breakaway so I couldn’t lift it. After that, I just stuck with it and kinda threw it there and then Toff came in. And he’s got a good shot, so he put it in.”

Andrew Mangiapane (4th of the season) assisted by Dillon Dube and Noah Hanifin, even strength, 18:54 into third period

The Flames were probably home free at this point. But a nice read of some soft defensive coverage from Hanifin set Dube and Mangiapane in on a two-on-zero rush against Bobrovsky. Dube, the beneficiary of a great set-up from Mangiapane to open the game’s score, returns the favour for his linemate.
“He set me up pretty good, so…,” chuckled Dube post-game, on returning the favour to Mangiapane from earlier. “Two-on-ohs can be tricky sometimes, though. You over-pass sometimes, the goalies read it well. I’m happy that he scored, or else it wouldn’t have looked so good. It was nice that he scored.”
Did a few things break the Flames’ way against Florida? Sure! That happens in hockey quite often. But you could argue that, looking back on the six goals, the Flames got the breaks they deserved: they out-battled, out-hustled and out-executed Florida at key moments, and it resulted in six goals and a reasonable comfortable win to kick off a big homestand.
It’s unlikely that the Flames will get the same breaks in their remaining four games at home, but their effort probably provides a decent enough template for some future successes.
Editorials
Recent articles from Ryan Pike