Flames Playoff Post-Game: The script flips as Dallas grinds out Game 2 over Flames 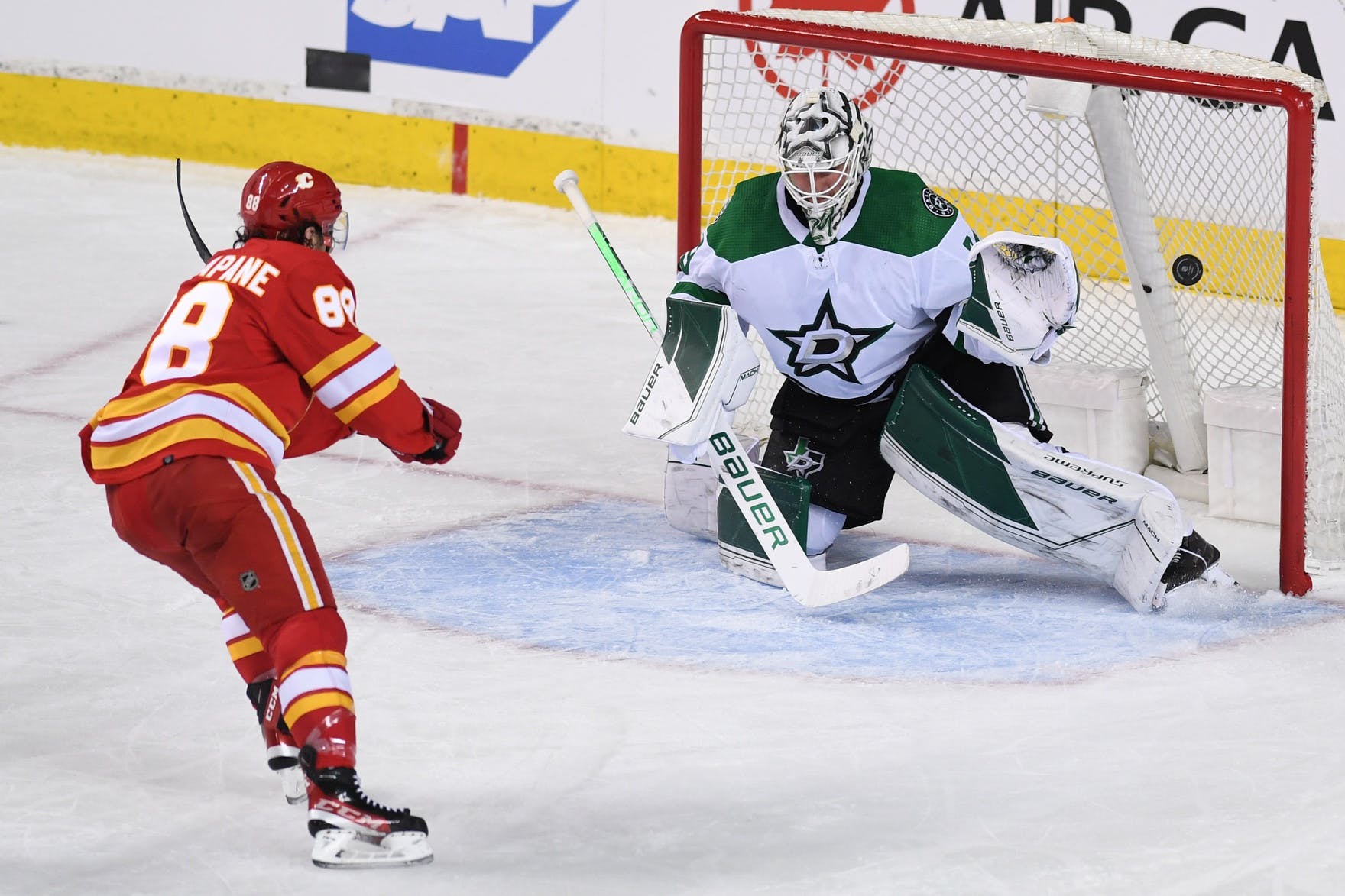 By Ryan Pike
6 months ago
On Tuesday night the Calgary Flames scored early and rode a 1-0 lead for the majority of the game, holding on to beat the Dallas Stars 1-0. On Thursday night, Game 2 flipped the script: Dallas scored early and held onto to beat the Flames 2-0.
Their best-of-seven playoff series is now tied at 1-1.

Game 2 began much like Game 1 ended: tight-checking, and full of hockey players mean-mugging each other. The Flames almost got an early goal, as Johnny Gaudreau whizzed into the Stars zone and scored on Jake Oettinger… except that Matthew Tkachuk was off-side and exchanging pleasantries with John Klingberg. Gaudreau missing the whistle led to a crowd and some penalties, a theme that carried on all evening.
The Stars opened the scoring midway through the first period. Noah Hanifin was being pursued in the Flames zone, so he spun and chucked the puck up the boards towards the blueline. But Jason Robertson intercepted the puck and fired the puck on net. Joe Pavelski redirected it from the slot area past Jacob Markstrom to give Dallas a 1-0 lead. (The Flames forward, notably Milan Lucic, were nowhere close to their zone to receive a Hanifin outlet passes.)
The Flames couldn’t get anything going at five-on-five.
Shots were 9-6 Stars (5-0 Stars at five-on-five) and scoring chances 4-1 Stars in the first period.
The Flames were a lot better in the second period. They generated a lot of chances, but at times got in their own way by making too many passes or missing the net with their shots. Andrew Mangiapane and Calle Jarnkrok both had some great looks that they couldn’t get past Oettinger.
Shots were 11-7 Flames (4-3 Flames at five-on-five) and scoring chances 6-4 Flames in the second period.
The Flames had oodles of scoring chances in the third, but the Stars did a very nice job boxing them out to avoid deflections, screens and the Flames getting to rebounds in front of their net.
The Flames pulled Markstrom for the extra attacker with 1:20 remaining in regulation. Michael Raffl added an empty net goal to ice this one as a 2-0 Stars victory.
Shots were 12-7 Flames (12-6 Flames at five-on-five) and scoring chances were 11-5 Flames in the third period.

This was a low event game, but the Flames did a nice job building their offensive attack as the game went along. They generated a decent amount, with many more (and higher quality) chances than they had in Game 1.
But the Flames’ details were lacking. Their power plays weren’t quite good enough. They tended to over-pass the puck looking for the “perfect” chance rather than playing a direct game. Oettinger didn’t see nearly enough tips, screens or general net-front traffic. They missed shots. They missed passes. Their puck management in general wasn’t very good until the third period. On both of Dallas’ goals, they couldn’t quite execute their coverage properly – on one play Hanifin threw a puck blindly up the boards, and on the other he couldn’t hold the puck in at the blueline with the net empty.
The lacking details were the difference in this game.

A bunch of Flames have some really good scoring chances, but Mangiapane probably had the most and the best chances. Like his teammates, he just couldn’t bury them when he needed to.
Honourable mention to Markstrom, who was excellent at times to keep this game close.

If we had to choose one, it’s Pavelski’s goal. But man, the Flames could probably look at tons of little moments in the second period where they could have beared down offensively and didn’t.

Via our friends at Sportsnet, this was the first game back for Flames athletic trainer James Borelli after missing some time undergoing treatment for leukemia.

The series now shifts to Texas for the next two games. Game 3 goes Saturday night in Dallas. It’s a 7:30 p.m. MT puck drop.
The series is tied 1-1.