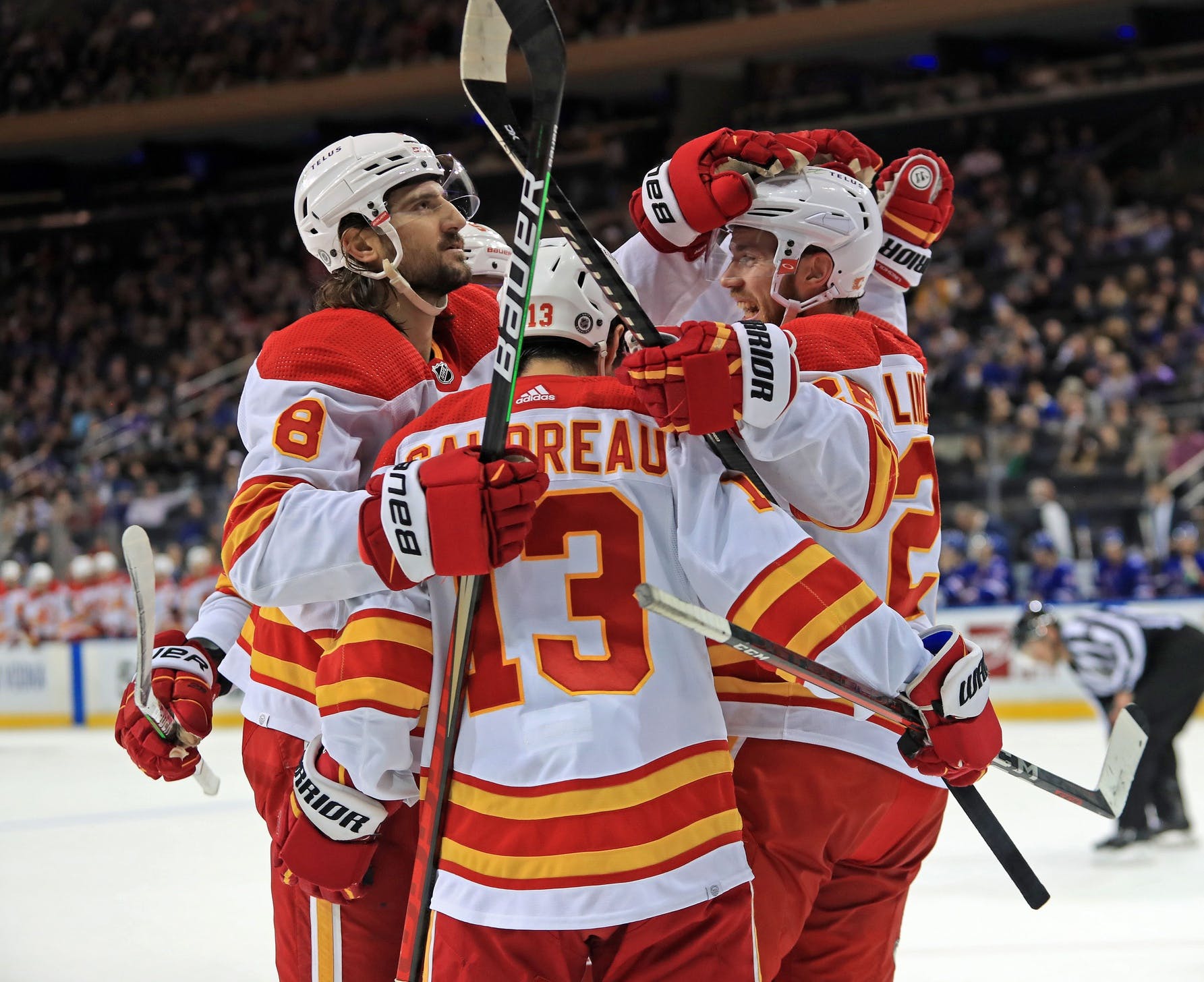 By Ryan Pike
1 year ago
The Calgary Flames continued their five game road trip on Monday night, heading to Manhattan to face the New York Rangers. The Flames didn’t play a perfect game of hockey by any stretch, but they were the better team for big stretches and got timely goaltending when they weren’t at their best.
The Flames beat the Rangers 5-1 in Madison Square Garden, improving to 3-0-0 through the first three games of their road trek.

The Flames pushed for most of the opening period. The Flames had more scoring chances, but the Rangers got more dangerous ones. Neither team was able to bury their chances, though, at least until the end of the period.
During a stretch of four-on-four hockey, the Flames got into the Rangers’ zone on a partial odd-man rush as Chris Tanev jumped into the play. Johnny Gaudreau found a seam, found Tanev with a pass, and Tanev beat Igor Shesterkin to give the Flames a 1-0 lead.
Shots were 15-7 Flames (13-7 Flames at five-on-five) and scoring chances 18-8 Flames in the first period.
The Flames got a timely save and a timely turnover and made it 2-0 in the second period. Sammy Blais was stopped by Jacob Markström, leading to a Flames rush the other way that was broken up. Patrik Nemeth attempted a pass from behind the Rangers net, but it was intercepted at the face-off dot by Andrew Mangiapane. Mangiapane spun, shot… and scored to make it 2-0 Flames.
After going down 2-0 the Rangers made a healthy push and the Flames weren’t able to match the home side’s intensity, but they managed to hold onto their lead.
Shots were 11-10 Rangers (9-7 Rangers at five-on-five) and scoring chances 12-2 Rangers in the second period.
The Rangers got on the board early in the third period just after a power play expired. Oliver Kylington stepped out of the penalty box just as Jacob Trouba released a point shot. Markström made the initial stop, but Dryden Hunt jammed in the loose rebound to cut Calgary’s lead to 2-1.
But the Flames responded with a couple sharp shifts after the New York goal and it led to them answering back. First Elias Lindholm’s line had some nice pressure in the Rangers zone, and that was followed by Mikael Backlund’s line doing the same. Blake Coleman got two shots off, with the second one (a back-hander from the slot) beating Shesterkin to give the visitors a 3-1 advantage.
A few minutes later, Backlund took advantage of some lax defensive play by the Rangers. He skated right into the offensive zone and picked the top corner past Shesterkin off the rush to give the Flames a 4-1 lead.
Mangiapane added a late power play goal off the face-off – banging in a rebound off a Rasmus Andersson shot that missed the net entirely – to cement this as a 5-1 Flames victory.

The Flames were excellent in the first period and merely okay in the second period. More importantly, they responded to New York’s goal by doubling-down on what got them their initial two-goal lead and managed to give themselves more breathing room.
They probably wish they could’ve gotten more from their special teams, but the Flames got very good goaltending and very good even strength efforts from their key players at key times. It wasn’t a perfect 60 minutes of hockey, but it was a pretty good effort in a tough building to play in as a visitor.

It’s gotta be the goaltender. The Flames were on their heels for much of the second period and while they didn’t get caved in, they relied on Markström to make some key saves to deflate the Rangers’ momentum a bit.

It was the eventual game-winner, but Mangiapane’s goal gave the Flames a margin for error. It was also a really nice goal, a spin-and-fire play that masked to the defenders and goaltender if he was going to pass it to a teammate or shoot it himself.

The alternate captains were Mikael Backlund, Sean Monahan and Matthew Tkachuk.
The Flames have Telus logos on their white road helmets (and have had them since the season began). They didn’t have an advertising decal on their home red helmets for the home opener, though.

The Flames (3-1-1) are back in action on Tuesday night when they visit the New Jersey Devils. The game is on Sportsnet West and begins at 5 p.m. MT.
Uncategorized
Recent articles from Ryan Pike