Flames Post-Game: Flames get early lead, hold on in Chicago 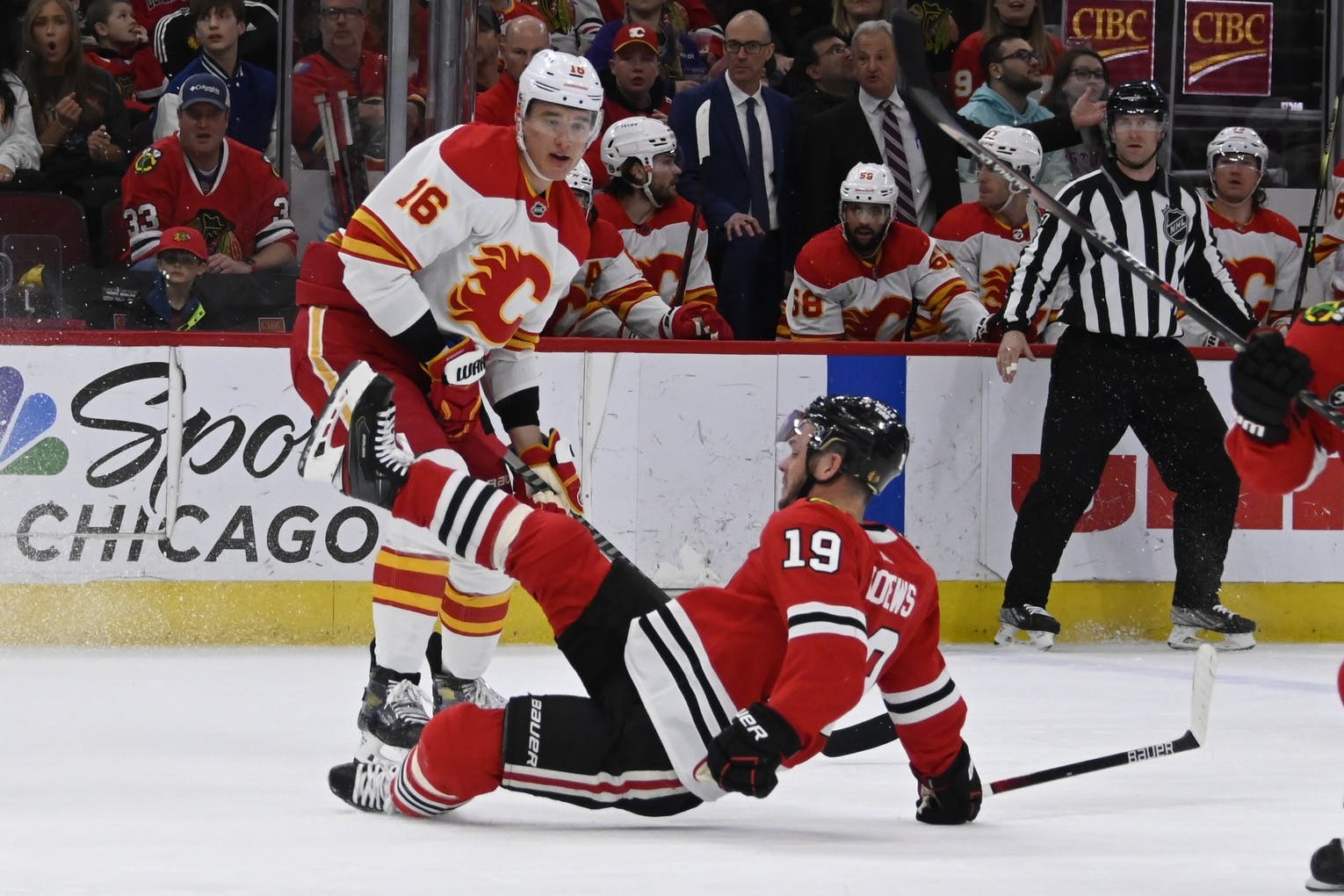 By Ryan Pike
7 months ago
The Calgary Flames headed down to Chicago to face the Blackhawks in their second-last makeup game of their many, many COVID postponements on Monday night. The Flames played 30 really good minutes and then 30 “good enough” minutes, as they scored first and then managed to defend reasonably well en route to a 5-2 victory over Chicago.

The Flames got on the scoresheet just 22 seconds into the game. Off an offensive zone face-off win, Dillon Dube tipped a Noah Hanifin point shot past Kevin Lankinen to give the Flames an early 1-0 lead.
The Flames added to their lead a little bit later in the first period off a really nice individual effort from Johnny Gaudreau. Gaudreau accepted a pass from Matthew Tkachuk to Lankinen’s right in the Chicago zone. Gaudreau went for a skate, skating behind the net, to the point, and then cutting back towards the net-front area, beating Lankinen blocker-side to give the Flames a 2-0 lead.
Chicago answered back, though. After a teammate won a puck battle behind the net, Jonathan Toews went to feed Dominik Kubalik in front of the Flames net. His pass missed Kubalik, but went between his skates right to Tyler Johnson, who accepted the loose puck and fired it past Jacob Markstrom to cut the Flames’ lead to 2-1.
But the Flames added to their lead late in the period. Oliver Kylington collected an errant clearing attempt and flung it towards the net. Blake Coleman redirected it from the slot past Lankinen to give the Flames a 3-1 lead.
Shots were 14-6 Flames (11-6 Flames at five-on-five) and scoring chances 9-5 Flames in the first period.
The story of the second period was Lankinen, as he scrambled and made a lot of good saves in the first half of the period to keep the game close-ish. In the latter half of the period, the Blackhawks got some chances and eventually broke through.
Midway through the period, Alec Regula’s point shot beat Markstrom blocker-side, clanged off the post, bounced off his back and went into the net. That goal cut Calgary’s lead to 3-2.
Shots were 15-8 Flames (13-8 Flames at five-on-five) and scoring chances 7-4 Blackhawks in the second period.
Both teams had their chances in the third period, but neither could get anything past Markstrom or Lankinen. Gaudreau scored an empty netter from the Flames’ blueline to pad the Flames lead and make it 4-2 and Kylington scored an empty netter from the Flames goal line to make it a 5-2 final score.
Shots were 10-6 Blackhawks (9-3 Blackhawks at five-on-five) and scoring chances 6-3 Blackhawks in the third period.

The Flames were really good in the first period, with good puck pursuit and effective puck management. In the second and third periods, they were merely “fine,” as if they were trying to conserve energy for Tuesday night’s game against Nashville.
It wasn’t a perfect game, necessarily, but it was a pretty solid road game and it was (quite simply) enough for them to capture two points as they try to lock down a division crown.

It’s a joint award to the line of Calle Jarnkrok, Coleman and Dube. They produced two goals, and they were somewhat unfortunate to not get more. Jarnkrok may be cursed offensively, but he’s making a lot of good things happen when he’s on the ice.

Coleman’s redirect goal stood as the game-winner, but it was also a really smart play by everybody in white on the ice. Plays like that are why the Flames won.

For those keeping track, Gaudreau now has 107 points on the season and Tkachuk has 98 points.

The Flames (47-20-9) hop on a plane and head east. They face the Nashville Predators on Tuesday night in a possible first round playoff preview.
The Flames have clinched a playoff spot. They’re guaranteed to finish (at least) second in the Pacific Division. Their magic number to clinch the Pacific Division crown is 1.5: any combination of Flames wins and Oilers losses adding up to 1.5 or more clinch a division title for the Flames.