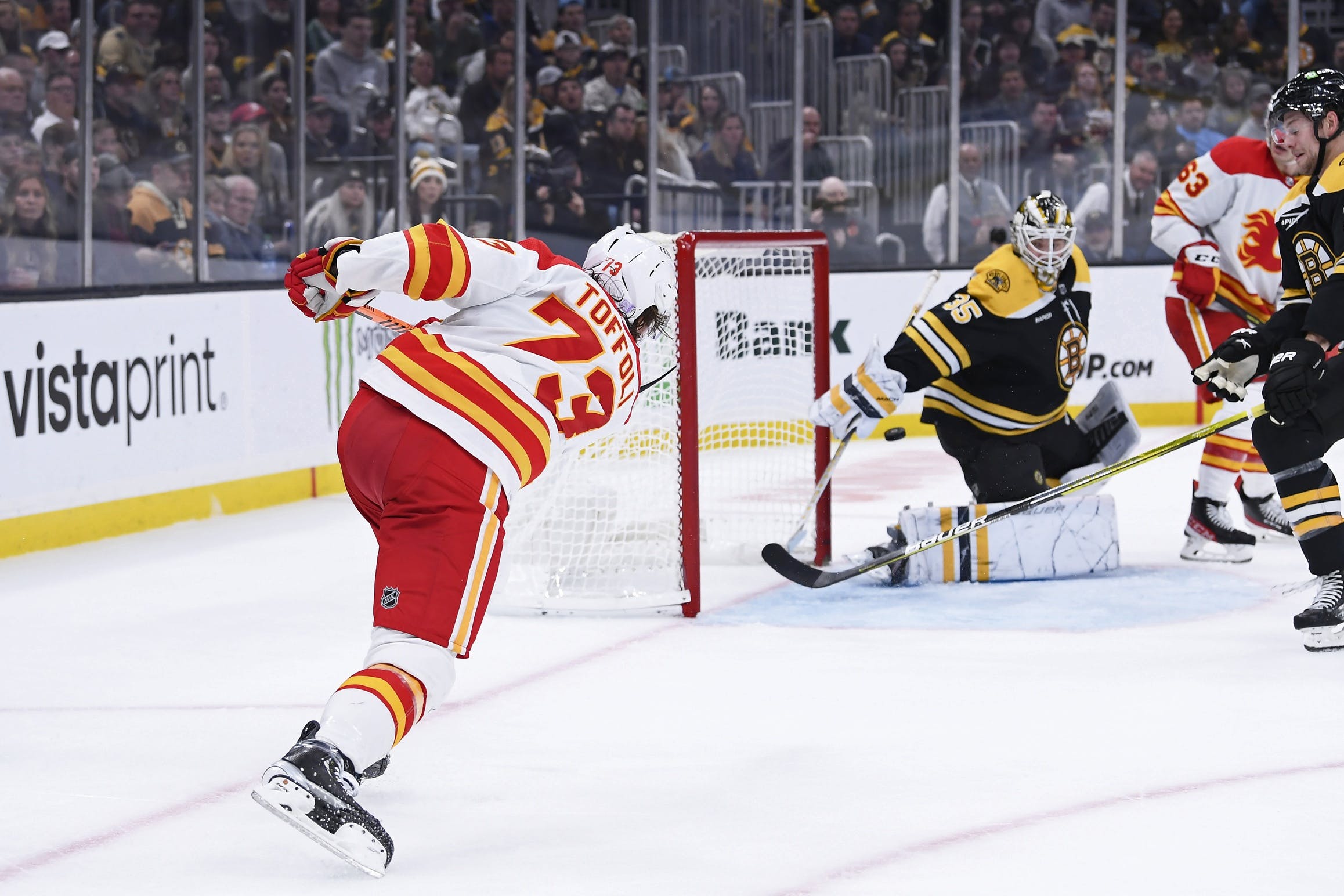 By Ryan Pike
22 days ago
Welcome to our game day content brought to you by NHL odds site Betway!
The Calgary Flames headed to Boston on Thursday night to face the Bruins, one of the very best teams in the National Hockey League this season. The Flames played well and had their moments, but the Bruins defended well and the Flames just couldn’t bury the chances they managed to generate.
The Flames lost to the Bruins by a 3-1 score, extending their losing streak to seven games.

The Flames had a strong first period and managed to open the scoring.
The fourth line drew a penalty in the offensive zone, sending the Flames to the power play. The power play didn’t score, but as the penalty expired Mikael Backlund entered the zone, passed to Andrew Mangiapane, and Mangiapane laid a nice drop pass to Noah Hanifin. Hanifin’s point shot beat Linus Ullmark one second after the penalty expired to give the Flames a 1-0 lead.
The Bruins answered back late in the period. The Flames’ third pair and fourth line got bunched up low in the defensive zone, opening a lane for Connor Clifton at the point. His shot was stopped by Dan Vladar in a bit of a goal-mouth scramble, but Clifton chased down the rebound and fired it into the net to tie the game up at 1-1.
First period shots were 13-13 (12-6 Flames at five-on-five) while five-on-five scoring chances were 6-6 (high-dangers were 4-0 Bruins).
The Flames were really good in the first seven minutes of the second period, out-shooting Boston 7-0. But they took a few too many penalties and Boston cashed in.
With MacKenzie Weegar in the box, Boston got some good looks but the Flames managed to get the puck away. But Nikita Zadorov couldn’t clear the zone, leading to a scramble in the slot and a Dillon Dube holding penalty (instead of the Flames penalty expiring and the game returning to five-on-five). The Bruins kept the PP pressure going for another two minutes, ending with a Charlie McAvoy wrister from the point beating Vladar just as Dube’s minor expired. That gave Boston a 2-1 lead.
Second period shots were 8-8 (5-3 Flames at five-on-five) while five-on-five scoring chances were 5-1 Flames (high-dangers were 3-0 Flames).
The Flames pressed in the third period for the equalizer, including two power plays and pulling Vladar for the extra attacker late. But they couldn’t get enough strong chances to tie things up. David Pastrnak added the empty-netter to make it a 3-1 Boston win.

Let’s get one thing out of the way: the Bruins are really good.
The Flames were really good at five-on-five, getting a lot of puck possession and firing a lot of shots on net. However, the Bruins did a very nice job owning the middle of their zone and minimized the amount (and quality) of tips, screens and secondary chances that the Flames got. The Flames couldn’t get enough going in the high-danger areas at even strength.
With how good Boston was defensively at five-on-five, the Flames really needed to do more with their power plays, and with being opportunistic with the chances they got. Too often they fired the puck right into Ullmark’s pads, or missed the net entirely. As Darryl Sutter mused after Tuesday’s loss: “It’s about the execution.”

A bunch of Flames had good outings. Vladar was quite sharp in his return to Boston, so let’s go with him.
But we saw pretty good outings from folks like Adam Ruzicka and Tyler Toffoli, who both had a lot of looks in the offensive zone.
On the flip side: all four Flames centres were below 50% at the face-off dot.

It’s gotta be the McAvoy go-ahead goal. The Flames just didn’t have enough in the tank to get another goal against a stingy Boston defensive effort.

The Flames (5-6-2) are headed home. They host the Winnipeg Jets on Saturday night.
News
Recent articles from Ryan Pike