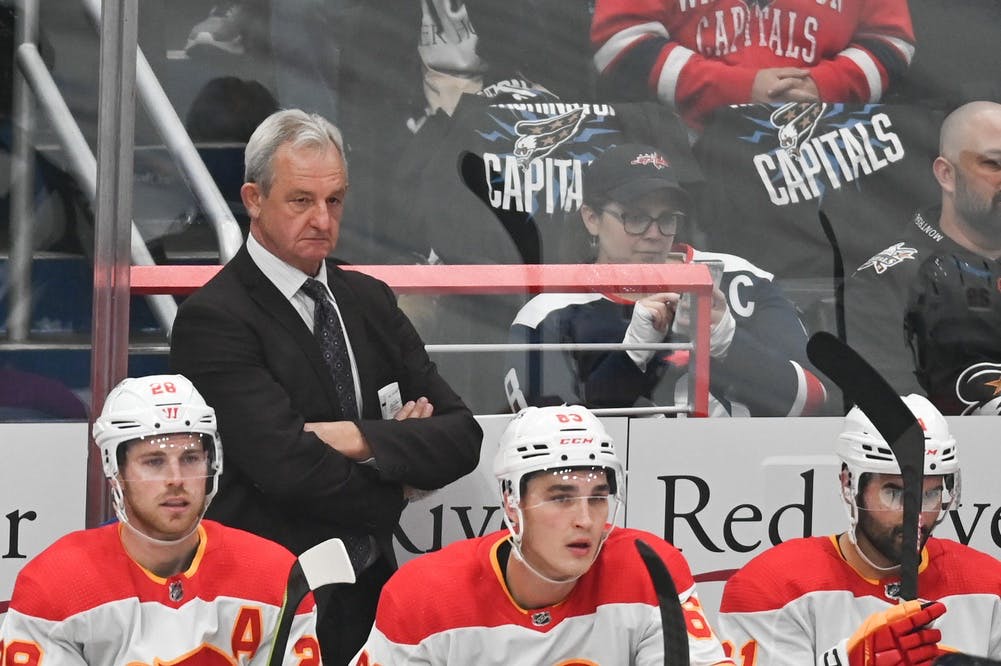 By Ryan Pike
2 months ago
Welcome to our game day content brought to you by NHL betting site Betway!
The Calgary Flames headed to Washington, D.C. on Friday afternoon to visit the Washington Capitals in the fifth game of their six game road trip. The Flames had a pretty good start to the game, but couldn’t translate zone time into enough dangerous scoring chances (or capitalize on the ones they did have) while the Capitals were opportunistic and buried their chances
The Flames lost 3-0 to Washington, dropping to 2-2-1 on their road swing.

The Flames had zone time and generally carried play in the opening period, but they just couldn’t execute with the puck. That carried over to a first period power play, which didn’t amount to very much.
Following that power play, the fourth line got caught up ice and Alex Ovechkin started a rush towards the Flames zone. The Flames couldn’t get coverage solidified in their own zone and Erik Gustafsson found T.J. Oshie in a soft spot of the Flames’ coverage by the slot. Oshie beat Jacob Markstrom five-hole to give the Capitals a 1-0 lead.
First period shots were 15-6 Flames (13-5 Flames at five-on-five) and five-on-five scoring chances were 9-7 Flames (high-dangers were 5-1 Flames).
The second period was pretty scrambly on both ends, but the Flames had trouble controlling the puck and containing the Capitals. Markstrom was forced to make a big save on an Anthony Mantha breakaway midway through the second.
However, the Capitals added to their lead late in the period. Evgeny Kuznetsov drove into the Flames zone and cut between Chris Tanev and Nikita Zadorov. He lost his balance and began to fall down, and as he fell and slid on the ice, he slid the puck past Markstrom’s outstretched pad to give the Capitals a 2-0 lead.
Second period shots were 13-6 Capitals (12-6 Capitals at five-on-five) and five-on-five scoring chances were 11-5 Capitals (high-dangers were 3-2 Capitals).
The Flames had a decent push early in the third period as they tried to get back into it. They had a power play that didn’t do much of anything in terms of creating scoring chances or momentum. A little after that failed PP, Milan Lucic took a minor penalty and Alex Ovechkin scored with a wrist shot from the side of the slot area – the area where he’s scored literally hundreds of PP goals in his career – to give the Capitals a 3-0 lead.
This game ended as a 3-0 Capitals victory.
Third period shots were 11-6 Flames (9-4 Flames at five-on-five) and five-on-five scoring chances were 6-4 Flames (high-dangers were 3-3).

Well, not scoring was a big reason they lost. They didn’t score because they really had challenges with urgency in the offensive and neutral zones, and generally with playing a connected style. Their transition game didn’t do much to create speed in their game, especially in the second and third periods, and the Capitals used their speed to bottle the Flames up and own the middle of the ice.
Simply put: the Capitals executed on the chances they had, while the Flames were unable to do so.

He gave up three goals, but Markstrom was tested frequently and looked pretty good for the most part.

That Kuznetsov goal, coming late in the second period, was a real tough one for the Flames to give up given the circumstances and how the game was going at that point.

The Flames (9-8-3) finish off their road trip on Saturday afternoon in Raleigh against the Carolina Hurricanes. It’s a 2 p.m. MT broadcast start.
News
Recent articles from Ryan Pike