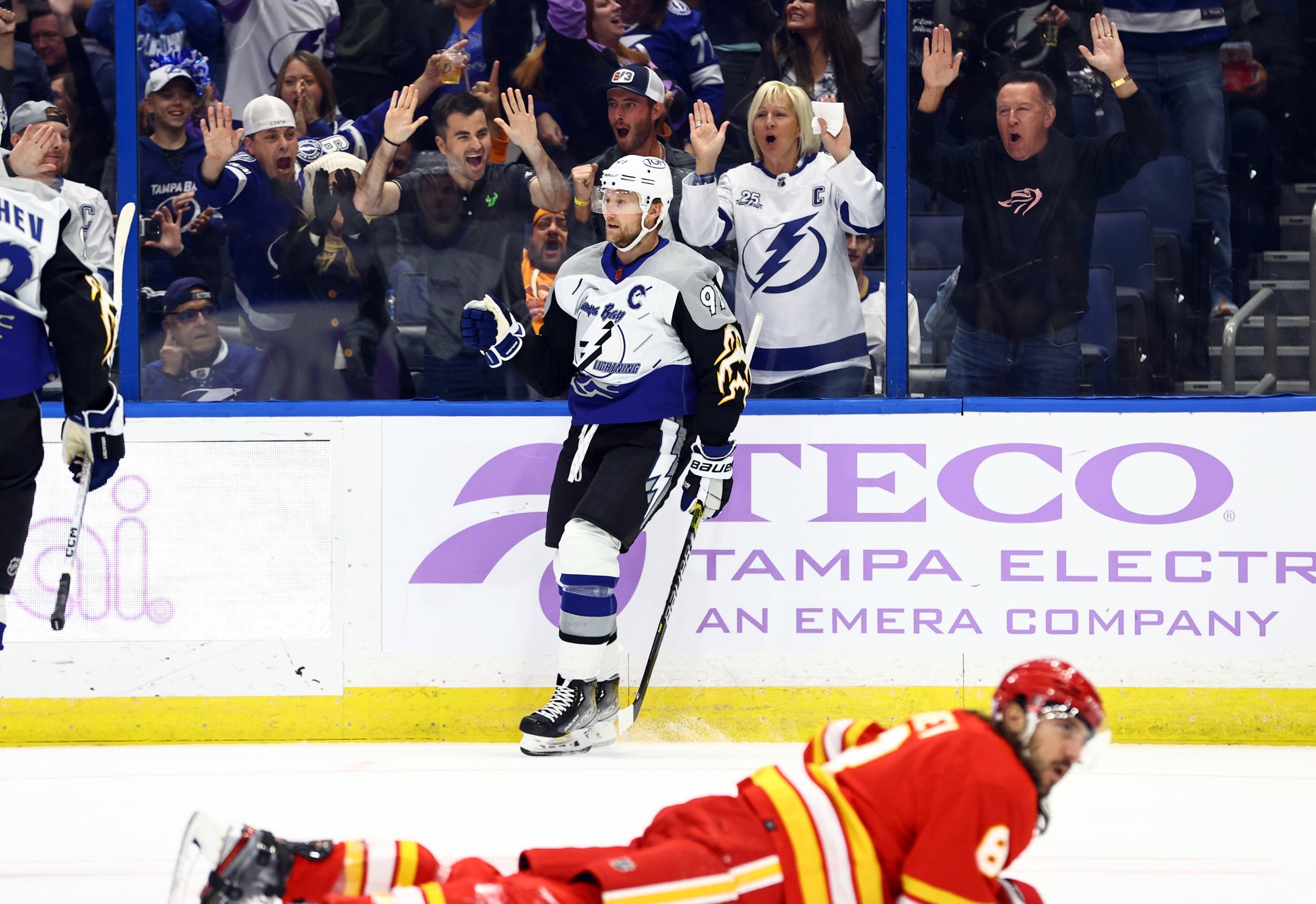 By Ryan Pike
2 months ago
Welcome to our game day content brought to you by NHL lines site Betway!
Folks, the Calgary Flames probably don’t like playing in Tampa Bay. Not only does the building currently known as Amalie Arena hold a lot of bad memories for the franchise, but the current era of the Flames (and their players) simply don’t have a lot of success against the Lightning over the past few seasons.
The Flames just couldn’t generate enough quality scoring chances, in any part of the game, en route to a 4-1 loss to the Lightning as they kicked off a six game road trip.

The Flames got off to a decent enough start, albeit one that got wiped out by a coach’s challenge. The opening period was pretty even. Milan Lucic looked to have scored off the rush, but Jon Cooper used his coach’s challenge and the zone entry was found to have been off-side ever-so-slightly and the goal was wiped out.
38 seconds later, the Lightning hit the Flames zone with numbers on the rush. Trevor Lewis almost swiped the puck, but his steal attempt somehow saw the puck go right around him and end up on Steven Stamkos’ stick. Uh oh. Stamkos fired a shot over a Chris Tanev block attempt and past Jacob Markstrom’s out-stretched glove hand to make it 1-0 Tampa.
First period shots were 12-11 Flames (11-11 at five-on-five), but five-on-five scoring chances were 14-8 Lightning (and high-dangers were 8-1 Lightning).
The Flames looked good in the second, for the most part, but couldn’t translate ample zone time into strong scoring chances. Late in the period, Rasmus Andersson took a holding penalty in the defensive zone.
On the resulting power play, Noah Hanifin couldn’t quite clear the zone as the puck was held in at the point by Mikael Sergachev. A couple passes later, and a Nikita Kucherov one-timer was behind Markstrom and the Lightning had a 2-0 lead.
Second period shots were 16-6 Flames (15-4 Flames at five-on-five) and five-on-five scoring chances were 13-5 Flames (but high-danger chances were 4-2 Lightning).
The Flames had some urgency in the third period and drew a penalty. That led to their first goal of the game. After the first chunk of their power play featured a lot of chances but no goals, the top unit got back into the zone, battled and scored. Jonathan Huberdeau protected the puck on the boards and sent it to Elias Lindholm at the point. Lindholm’s shot (with a big Nazem Kadri screen) eluded Andrei Vasilevskiy to cut the Tampa lead to 2-1.
But just 10 seconds later, Tampa answered back. A rim-around the boards in the Flames zone off a dump-in was held in at the right point by Philippe Myers. Myers chucked the puck on net and it beat Markstrom on his glove side to give Tampa a 3-1 lead.
The Flames pressed late but couldn’t get anything else past Vasilevskiy. Kucherov added a late empty-netter and this game ended as a 4-1 Tampa victory.
Third period shots were 12-7 Flames (8-3 Flames at five-on-five) and five-on-five scoring chances were 5-5 (but high-danger chances were 3-1 Lightning).

The shots may have been heavily on their side, but offensively the Flames were the second-best team on the ice. They couldn’t win enough battles or get enough tips, screens or second chances in front of Vasilevskiy to make this a competitive game.
The Flames also needed one of their big name players to be a difference-maker the way Tampa got difference-making performances from folks like Stamkos and Kucherov. The Lightning stars were better than the Flames’, and that tilted the game in favour of the home side.
And we’d be remiss if we didn’t point out the quick swings of momentum that the Flames allowed. Lucic’s goal is called off and 38 seconds later Tampa scores. The Flames score and then 10 seconds later Tampa scores. Those are things that just cannot happen on the road against a team of Tampa’s quality.

Lindholm had the lone goal, but we’re giving it to Huberdeau, who was battling and noticeably full of piss and vinegar all game long.

Myers’ goal was a puck that cannot get past the goaltender when the Flames had just clawed back within a goal. That goal completely took the air out of the Flames’ sails.

The Lightning wore their white reverse retro jerseys for this game, so the Flames brought their red home jerseys on the road for this game.

The Flames (7-7-2) are back at .500. They’re back in action on Saturday afternoon against the Florida Panthers. It’ll be a 2 p.m. MT start time on Sportsnet.
News
Recent articles from Ryan Pike