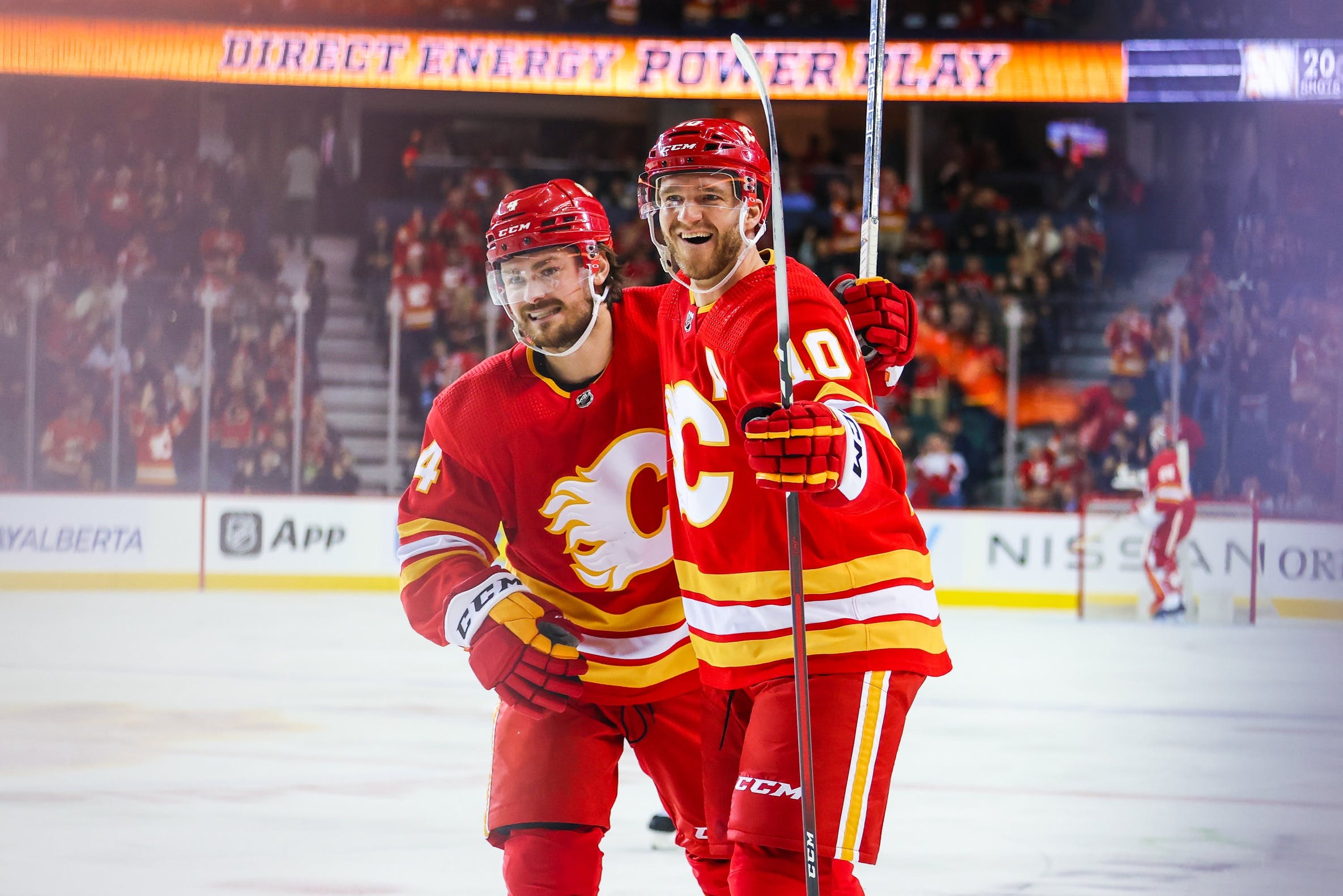 By Ryan Pike
1 month ago
Welcome to our game day content brought to you by NHL Lines site Betway!
On Monday night, the Pittsburgh Penguins had a strong first period in Edmonton and then the game got away from them. On Tuesday night, they faced the Calgary Flames and the game got away from them quickly via a one-sided first period performance.
The Flames never trailed in this contest, holding on to beat the visiting Penguins by a 4-1 score.

The Flames looked strong in the opening period. They registered the first seven shots of the game and aside from a handful of iffy breakouts from their own end, they really carried play in the first period.
Nazem Kadri opened the scoring just past the midway point of the period off a really nice cycling and pressure shift from that line. Dillon Dube passed to Andrew Mangiapane, who found Kadri cutting across the slot (from behind the net) with a pass that Kadri redirected past Casey DeSmith to give the Flames a 1-0 lead.
A little later, Trevor Lewis took a minor penalty. The Flames had a couple decent scoring chances on the resulting Penguins power play. Another chance, just as Lewis’ penalty expired, made it 2-0. Kadri grabbed an errant Sam Lafferty pass in the Flames zone – intended for Danton Heinen – and the Flames went back the other way. Kadri opted to shoot rather than pass to teammate Tyler Toffoli, beating DeSmith just inside the far post (blocker-side) to double the Flames’ lead.
The Penguins got a few good scoring chances late, but Jacob Markstrom was sharp.
First period shots were 20-6 Flames (13-5 Flames five-on-five) and five-on-five scoring chances 12-5 Flames (high-danger chances were 5-4 Flames).
The Penguins came out flying in the second period and carried play for much of the frame. But after Sam Poulin took a slashing penalty, the Flames added to their edge on the power play. Five seconds into the minor, off a face-off win in the Penguins zone, Jonathan Huberdeau’s wrister beat DeSmith from the left side of the zone, making it 3-0 Flames.
Kadri was called for a high-sticking minor right after Huberdeau’s goal, giving Pittsburgh a power play. 50 seconds into that minor, the Penguins answered back. The Flames’ shorthanded unit had an odd-man rush they couldn’t score on, allowing the Penguins an odd-man rush of their own back the other direction. Jeff Carter’s initial shot was stopped by Markstrom, but Evgeni Malkin buried the rebound into the wide-open cage to cut the Flames lead to 3-1.
But the Flames got one back a little later off a strong shift from the fourth line. A few hits and forechecks caused turnovers, which eventually led to a Michael Stone slapper from the right point – with Kevin Rooney parked in front of the net – that beat DeSmith to make it 4-1 Flames.
Second period shots were 21-4 Penguins (15-2 Penguins at five-on-five) and five-on-five scoring chances were 16-2 Penguins (high-danger chances were 5-2 Penguins).
The third period was fairly even, with the Flames managing the puck well and largely doing their best to run out the clock. The Flames defended well and held on for the 4-1 victory.
Third period shots were 11-6 Flames (8-5 Flames at five-on-five) and five-on-five scoring chances were 7-4 Flames (high-danger chances were 5-2 Flames).

The Flames didn’t play a perfect game, but this was one of their better outings so far. They really dominated 18 minutes of the first period, aside from a couple lapses that led to chances for the Penguins. They rode out the Penguins’ storm in the second period, as the visitors pressed and the home side managed to be opportunistic with their two goals. From then on, they played smart, structured hockey for got two points.
Again, there’s room for improvement across the board, but the Flames out-scored Pittsburgh 3-1 at even strength and their special teams were basically a draw. If you want to call Kadri’s second goal a special teams goal, then the Flames won both the even strength and special teams battles. Unless your special teams are lousy, winning the even strength battle is usually enough to get you a W.

We’ve gotta go with Kadri, as he had three points and was consistently noticeable.
But the Flames had some bright spots throughout their lineup. They won two-thirds of the game’s face-offs. Markstrom looked poised and comfortable in net. Andersson was constantly noticeable.

How many times have the Flames had a lot of shots and chances in the first period, but not gotten much of a lead out of them? It was a big confidence boost for the club to head into the first intermission with a two-goal lead, courtesy of Kadri’s second goal.

Kadri’s first period goal extended his point streak to six games. In other words: he has a point in every regular season game he’s played with the Flames so far.
Huberdeau’s second period goal was his first-ever with the franchise, making him the 376th different player to score a goal since the team’s move north from Atlanta, and the 434th different player to score in Flames franchise history.

The Flames (5-1-0) are back in action on Saturday night in a Battle of Alberta rematch against the Edmonton Oilers.
News
Recent articles from Ryan Pike