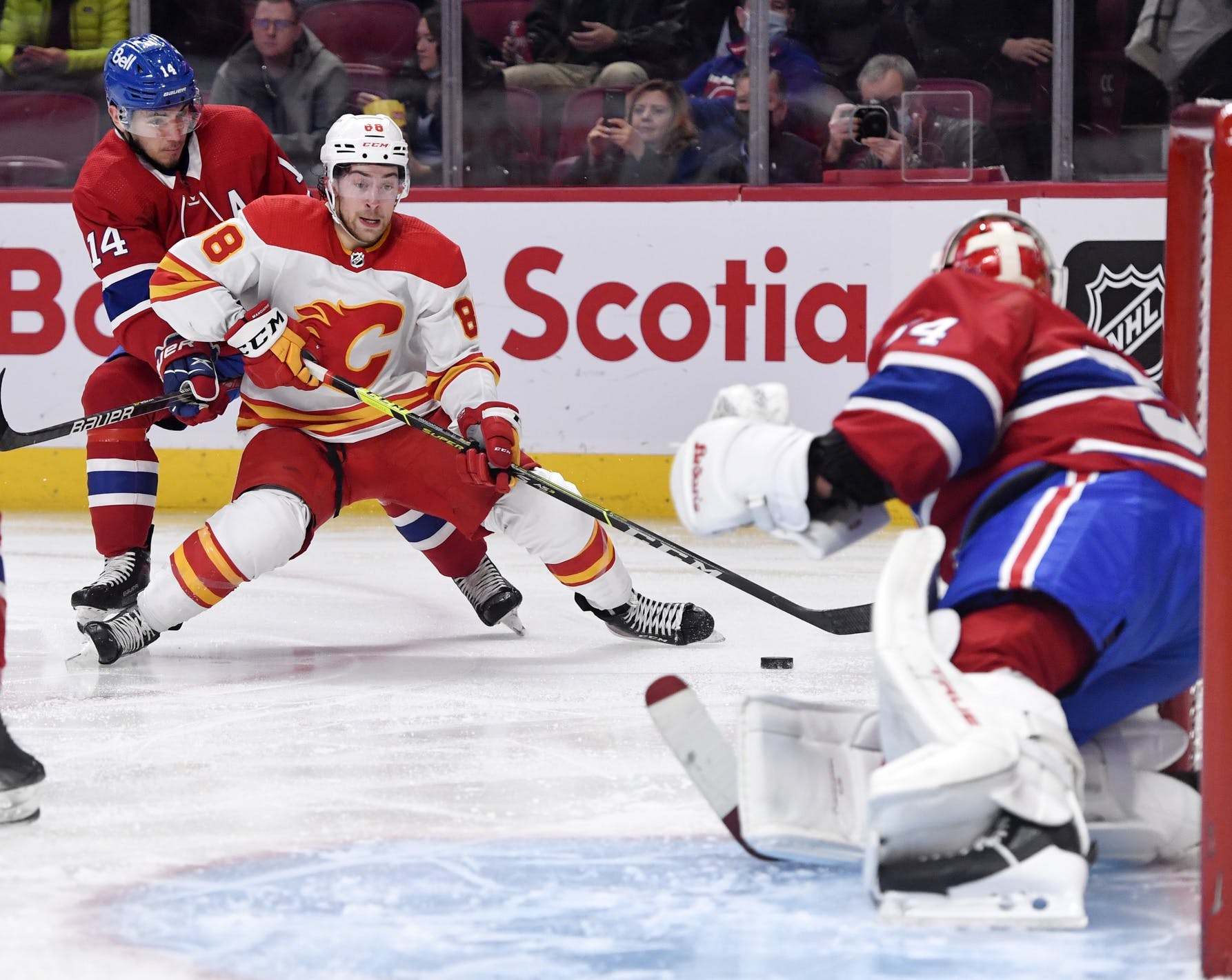 By Ryan Pike
1 year ago
The Calgary Flames have been one of the NHL’s top road teams in the 2021-22 season. But the structure and precision that’s been their calling card this season was absent on Thursday night, as they played a fairly sloppy road game en route to a 4-2 loss to the Montreal Canadiens to begin a seven game road trip.

The Flames opened the scoring early in the first period. Oliver Kylington pinched to maintain possession, then fed it to the point. Trevor Lewis made a shot that was tipped by Mikael Backlund past Jake Allen to give the visitors a 1-0 lead.
But Montreal answered back. The fourth line got hemmed in and couldn’t clear the puck. Jacob Markström made a sprawling save on a tip by Tyler Toffoli, but the puck bounced off of him and landed behind him in the crease, and Ben Chiarot walked in and poked it into the open net to tie the game at 1-1.
But the Flames got their lead back before the intermission with a gorgeous play by Andrew Mangiapane. Sean Monahan chucked a puck through a narrow passing lane to Mangiapane, who received the pass in his skates. Mangiapane then booted the puck up to his stick and chipped it over Jake Allen back-handed (and on one knee) to give the Flames a 2-1 lead.
Shots were 10-10 (all five-on-five) and scoring chances 8-7 Flames in the first period.
The Habs tied it up in the second period. Blake Coleman took a penalty after chasing down a Habs player to negate a scoring chance caused by a Nikita Zadorov turnover in the neutral zone. On the resulting power play, Chris Wideman’s point shot hit iron but Brendan Gallagher buried the rebound to tie the game at 2-2.
Shots were 10-10 (5-5 at five-on-five) and scoring chances 4-4 in the second period.
Montreal took the lead after a flurry of penalties back and forth in the third period. Coleman turned over the puck in the neutral zone, leading to an odd-man power play rush for the Habs. Nick Suzuki made a smart play, holding onto the puck and waiting for Markström to commit, then banking the puck into the net off his pad. That gave the Habs a 3-2 lead midway through the third period.
The Flames just couldn’t muster the tying goal. Jake Evans scored an empty-netter late in the period to make it a 4-2 final score.
Shots were 8-6 Canadiens (5-3 Flames at five-on-five) and scoring chances 6-5 Flames in the third period.

Well, the Flames played one of their sloppier games of the season in terms of both structure and execution. Missed passes, shots that missed the net or hit skates or shin-pads, careless or reckless penalties – all of these things were present in their game on Thursday after being previously absent.
Their first line was also really effectively negated by Montreal and the remainder of the team couldn’t generate or execute a ton.

Let’s give it jointly to the new-look shutdown line of Backlund, Coleman and Dube. They weren’t perfect – Coleman had a few iffy reads and plays – but they were Calgary’s most effective unit on this evening.

Let’s take the third period collectively. The Flames had a chance to win the game by winning the period, but just couldn’t generate anything (and took too many penalties to really generate much momentum at five-on-five).

There were a lot of penalties in this game.

The Flames (7-3-3) are off to Toronto! They visit the Maple Leafs tomorrow night.
Uncategorized
Recent articles from Ryan Pike