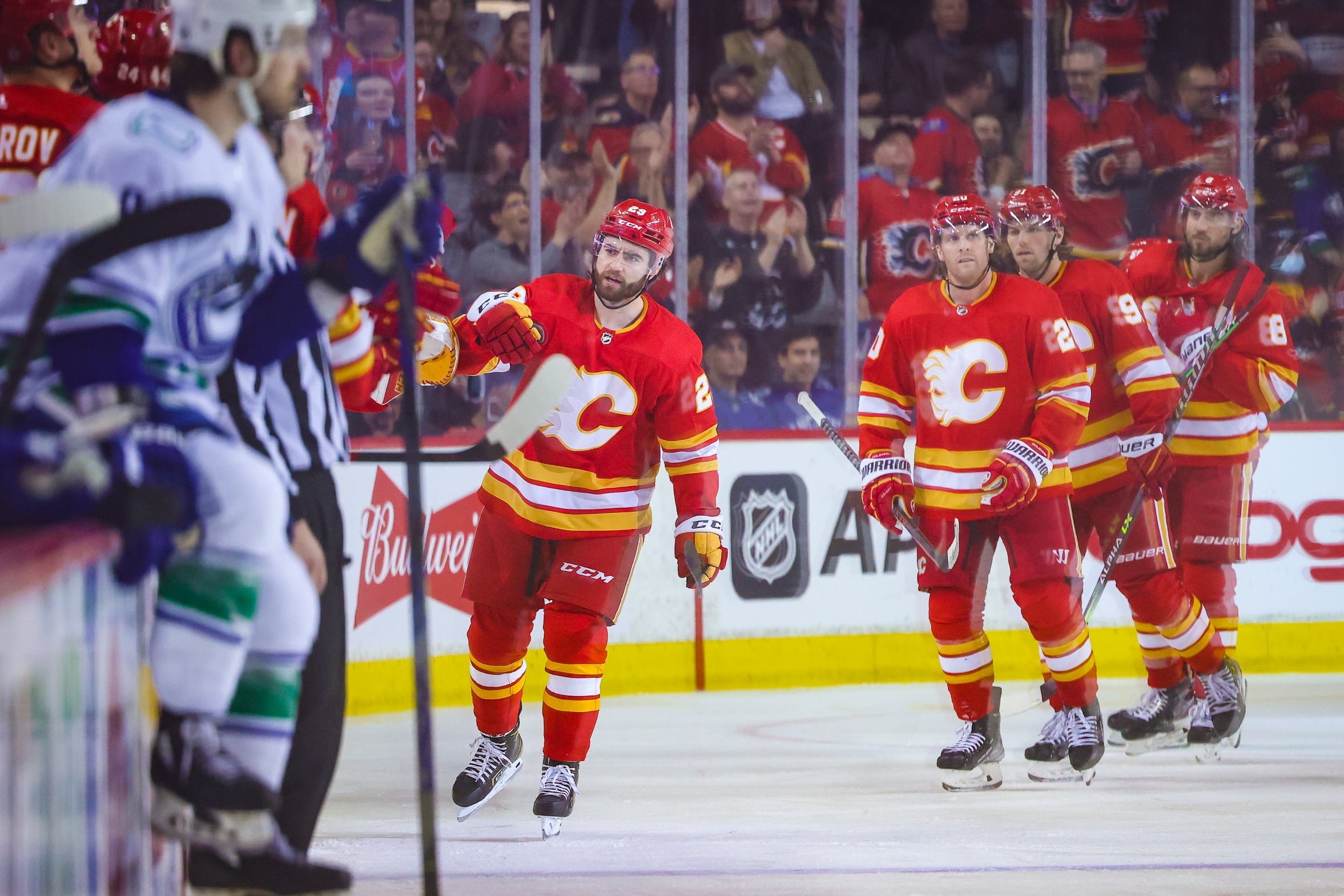 By Ryan Pike
9 months ago
The Calgary Flames hosted one of their most bitter rivals on Saturday night in the final regular season game on the docket. The Vancouver Canucks showed the desperation you would expect from a team clinging to their playoff hopes and dreams, but the Flames were sharp offensively and good enough defensively en route to a 6-3 home victory over the Canucks.
The Flames are strutting into their final week of the regular season with a playoff berth assured. With the loss, the Canucks remain alive only mathematically.

The opening 11 minutes of this game featured two teams trying not to give up too much largely succeeding in that approach, with three shots on goal combined. But the Flames started to get more and more offensive zone time in the final seven minutes of the period and were unfortunate not to bury their chances.
Shots were 8-7 Flames (all at five-on-five) and scoring chances 8-4 Flames in the first period.
The Flames were finally rewarded early in the second period. Elias Lindholm drew a high-sticking penalty, giving the Flames a power play. Lindholm buried a cross-slot pass from Johnny Gaudreau, beating Thatcher Demko top corner, to give the Flames a 1-0 lead. It was Lindholm’s 40th goal of the season.
As Beasley was announcing the Lindholm’s goal, the third line cashed in. A cycle play in the Canucks zone down low ended with Dillon Dube firing a Calle Jarnkrok pass from the slot past Demko to make it 2-0 Flames. The two goals occurred 16 seconds apart.
But the Canucks scored late to ruin Daniel Vladar’s developing shutout bid. The pairing of Rasmus Andersson and Hanifin couldn’t come away from a corner puck battle with the puck. Quinn Hughes snuck in from the point, accepted a pass from Vasily Podkolzin, and sniped a shot past Vladar to cut Calgary’s lead to 2-1.
Shots were 16-13 Flames (16-12 Flames at five-on-five) and scoring chances 14-6 Flames in the second period.
The Canucks pushed back a bit in the third period and tied up the game via some nice execution. Conor Garland snuck away from Oliver Kylington and Tyler Myers fired a slap-pass towards the back post of the Flames net, where Garland whacked it into the net with a really nice redirect. That made the game 2-2.
But the Flames kept the same five players out for the next shift and they responded, with a Chris Tanev point shot bonking into the Canucks net off the skate of Brett Ritchie (among a cluster of players blocking Demko’s view) and that gave the Flames a 3-2 lead. That goal was 14 seconds after the Canucks’ tying goal.
The Flames pulled away a little later in the period. First, Dube chipped a shot past Demko off the rush (off a feed from Lindholm) to make it 4-2 Flames.
Then, 12 seconds later, Nikita Zadorov’s point shot off a Mikael Backlund face-off win knuckleballed and trickled through Demko to give the Flames a 5-2 lead.
Elias Pettersson made it interesting late in the period, with Demko on the bench for the extra attacker, wandering into the Calgary zone and sniping the top corner (blocker side) on Vladar to cut the lead to 5-3.
But Gaudreau added an empty net goal to give the Flames a 6-3 lead and cement the victory.
Shots were 13-7 Canucks (6-6 at five-on-five) and scoring chances 6-5 Flames in the third period.

The Flames didn’t play a perfect hockey game, but their game built really well. They didn’t give Vancouver a ton of daylight overall, and they did a good job bouncing back from their mistakes when they did happen. If you want to criticize the locals, their defensive zone play was sometimes a little bit spotty, but they were clearly the better team in all three zones.
They also did a good job building on their strong plays. They scored twice in 16 seconds in the second period, twice in 12 seconds in the third period, and Ritchie’s go-ahead goal after Vancouver tied it in the third period was 14 seconds after the Canucks’ marker.

Let’s give this to the fourth line. Milan Lucic, Trevor Lewis and Ritchie haven’t been amazing as of late, but they were consistently in Vancouver’s kitchen, mucking around, creating chances and generally being a great shit-disturbing trio. With the post-season just around the corner, they’ll need more games like this from that group.

There were essentially three:

2019 seventh-rounder Dustin Wolf dressed as backup to Vladar in this game, as the Flames opted to rest Jacob Markstrom before the last road trip of the season next week.
Milan Lucic wore this outfit tonight:

The Flames (49-20-10) are headed on the road to finish their regular season schedule. They head to Nashville to face the Predators on Tuesday night.
The Flames have clinched a playoff spot and top spot in the Pacific Division.