Flames Post-Game: Home side rallies back to beat Golden Knights 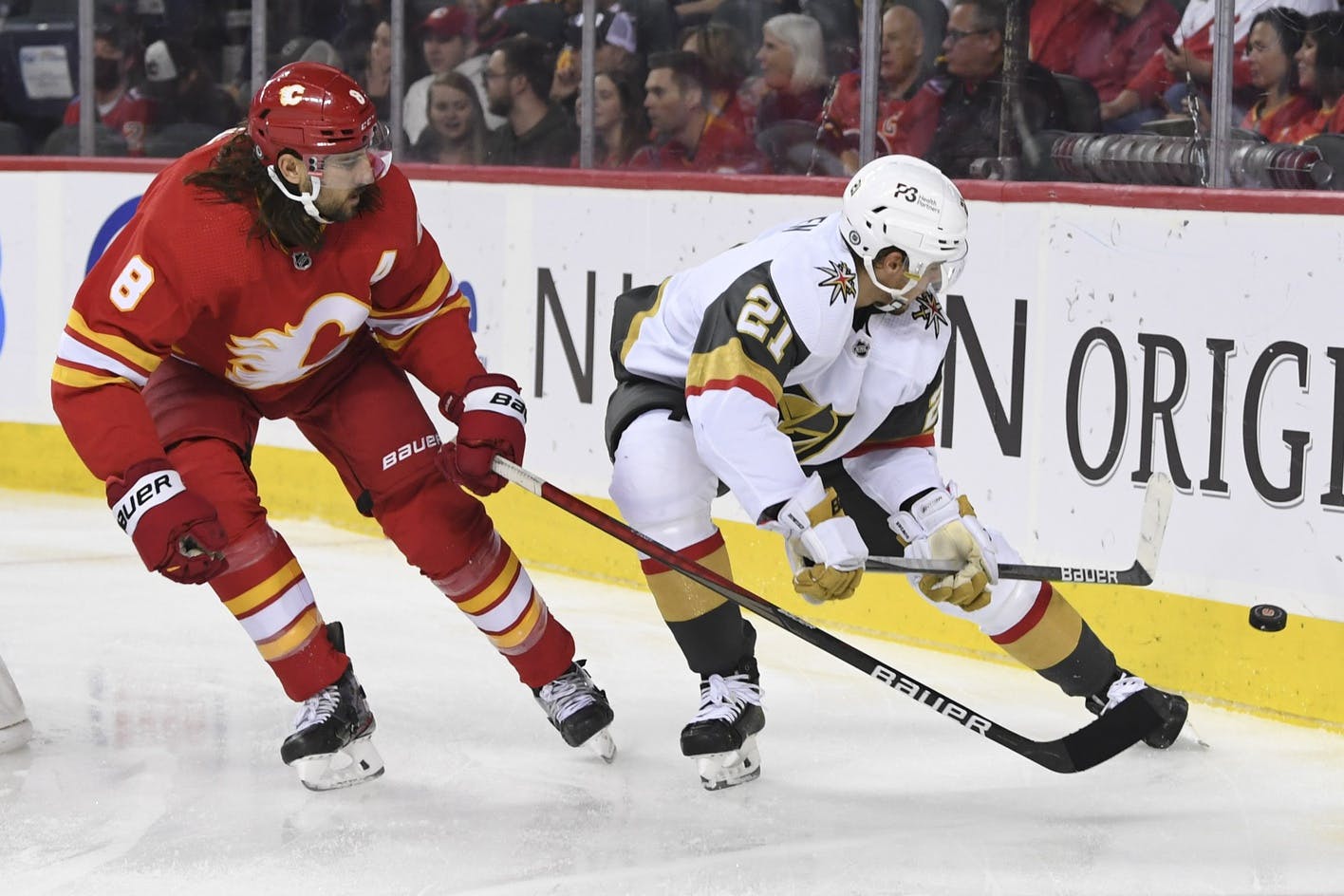 By Ryan Pike
3 months ago
In the Calgary Flames’ games against the Vegas Golden Knights, the house always wins. Well, almost always. The Flames dug themselves a 2-0 hole after one period, but they battled their way back and beat Vegas by a 3-2 score.
It’s the ninth win for the home side of this rivalry in 11 lifetime meetings.

The Golden Knights got on the board first off a bit of a weird goal. Vegas entered the zone with a quasi three-on-two – a third Flames skater was trying to get back into position – and William Carrier’s shot appeared to have ramped off Chris Tanev’s stick and changed elevation on Jacob Markstrom, leading to him just whiffing on a glove save attempt and giving Vegas a 1-0 lead.
The Flames pressed to try to get one back, but they were victimized a few times by Vegas netminder Logan Thompson. His stop on Tyler Toffoli midway through the period was especially impressive.
But Vegas scored another one in the waning minutes of the first period. The Flames won a defensive zone draw but couldn’t clear the zone. Vegas regained the puck, cycled to the point and Brayden McNabb’s point shot was tipped by Brett Howden past Markstrom (glove-side) to give the Golden Knights a 2-0 lead.
First period shots were 13-9 Flames (12-7 Flames at five-on-five), while scoring chances at five-on-five were 10-7 Flames (high-danger chances were 4-1 Flames).
The Flames came out with a ton of jump in the second period, beating Vegas for many loose pucks and engaging in board battles much more readily than they were in the second period. This increased battle level seemed to take Vegas by surprise, and the Flames drew six consecutive minor penalties in the period.
On the second power play, the Flames seemed to score off a goal-mouth scramble that ended with Elias Lindholm jamming in a loose rebound. But Thompson was sprawled out in his crease beside a sprawled out Nazem Kadri, and Vegas challenged for goaltender interference. The challenge was successful and the goal was wiped out.
But on the next power play, Lindholm scored a goal that counted. But it was another weird one. Lindholm took a pass from Jonathan Huberdeau and whacked at it, and the puck hit Thompson and bounced into the air above him. Lindholm and two Vegas players flailed around at the puck as it flew above Thompson and it went off a stick and in. Replays showed that it went in off Alec Martinez’s stick, so the goal counted and cut Vegas’ lead to 2-1.
A couple minutes later, on the fourth Flames power play of the period, Toffoli finally got on the board. Rasmus Andersson’s point shot was blocked by a Vegas defender, but Toffoli grabbed the loose puck and went high on Thompson to tie the game at 2-2.
Second period shots were 15-7 Flames (5-4 Golden Knights at five-on-five), while scoring chances at five-on-five were 8-4 Flames (high-danger chances were 3-2 Flames).
The Golden Knights got a couple power plays in the third period but couldn’t cash in. The Flames pressed but Thompson kept the game tied.
But eventually, Thompson couldn’t stop everything. Mikael Backlund’s line headed into the offensive zone and cycled the puck. Blake Coleman’s wrap-around missed the net, but Backlund jammed in the errant puck to give the Flames a 3-2 lead late in regulation.
The Flames held on for the victory.
Third period shots were 12-5 Flames (9-3 Flames at five-on-five), while scoring chances at five-on-five were 6-2 Flames (high-danger chances were 3-0 Flames).

In the opening 20 minutes, the Flames were always in the right places but they didn’t battle or execute quite as well as they wanted to. They were often beaten for pucks and lost battles. They rectified that issue in the second period, and basically out-worked and out-battled the Golden Knights from then on (for the most part).

It’s gonna be a joint award to the fourth line. They drew four penalties in the second period, and the power plays gave the Flames a ton of momentum. Independent of that, the fourth line was consistently noticeable, crashing and banging and generally being a nuisance.
The Flames’ power play certainly will get more picturesque and seamless, but they were effective at getting goals when the Flames needed them.

For the first time this season, Jonathan Huberdeau wore an alternate captain’s A in a game. He and Elias Lindholm are splitting an A this season, with Chris Tanev and Mikael Backlund occupying the other two slots.
With Rick Ball and Kelly Hrudey both unavailable, Peter Loubardias joined Harnarayan Singh on the TV call of the game and our pal Pat Steinberg did colour alongside Derek Wills on the radio side.

The Flames (3-0-0) are back in action on Thursday night when they host the Buffalo Sabres.
News
Recent articles from Ryan Pike