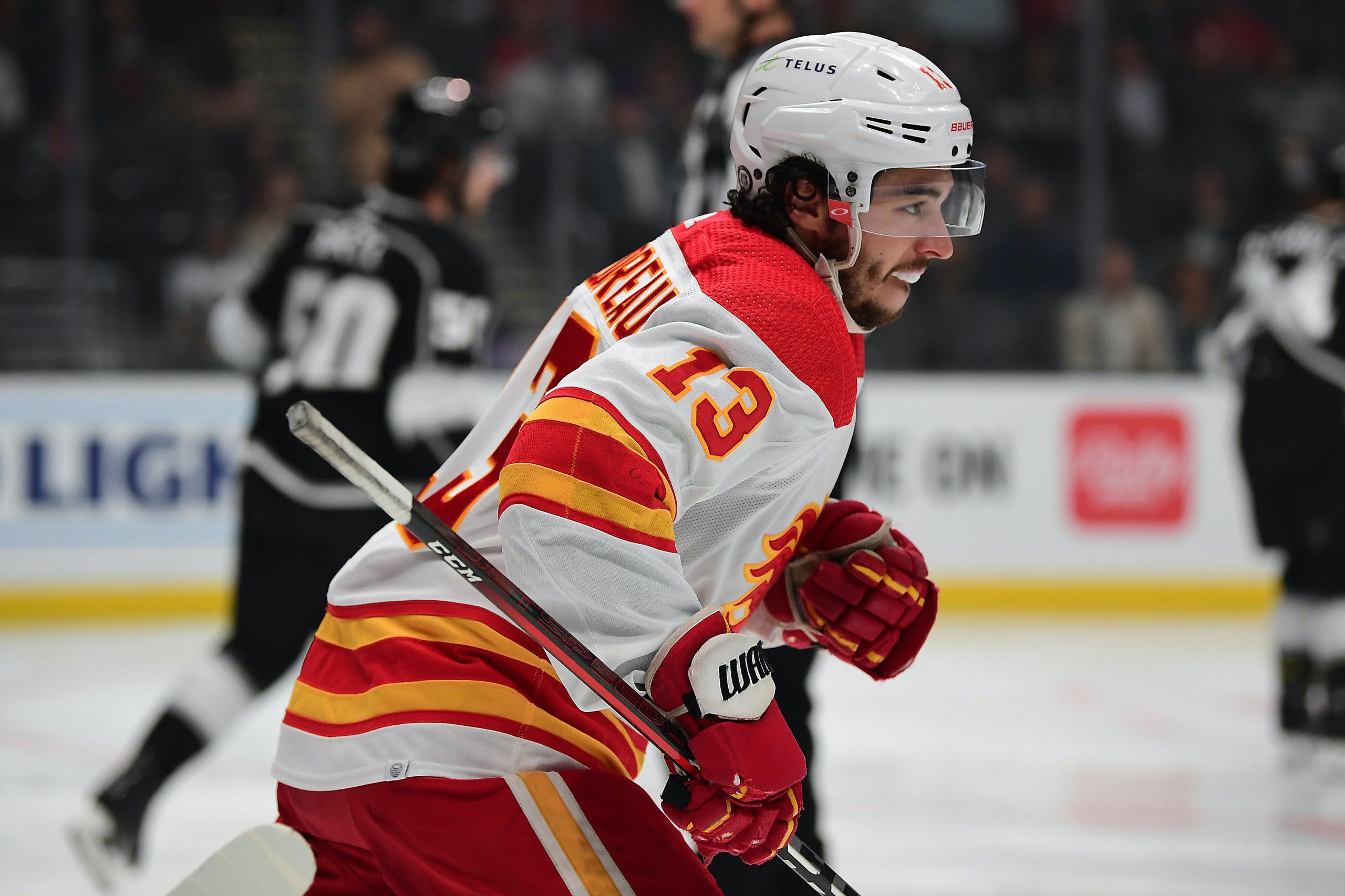 The Flames opened the scoring early. As in: right after the opening face-off. The Flames won the draw and dumped the puck into the Kings’ zone. Johnny Gaudreau chased down the loose puck in the corner to Cal Petersen’s right after Petersen played the puck, then hucked the puck at the goalie’s skates. The puck careened in off his skates to give the Flames a 1-0 lead just 10 seconds into the game.
The Kings answered back, though. The Flames turned over the puck inside their own blueline and the Kings began a rush back in the other direction. Anze Kopitar spied Adrian Kempe sneaking in behind Nikita Zadorov, and Kempe leaned into Kopitar’s feed, beating Jacob Markstrom to tie the game up at 1-1 midway through the period.
The game got a bit clunky after that, as the Flames got a power play but then lost it via a scrum in front of the Kings net that resulted in Gaudreau (noted goon) getting the extra penalty for body-slamming Sean Durzi. Michael Stone got a minor during the ensuing four-on-four stretch, giving the Kings a lengthy five-on-three advantage. Kempe buried a feed from Kopitar for his second goal of the period to give the Kings a 2-1 lead.
Shots were 13-6 Flames (7-4 Flames at five-on-five) and scoring chances 4-2 Flames in the first period.
The second period was more high event than the opening period but still fairly tight-checking and tense. Both teams got chances, but the high-danger chances were still fairly rare.
A little past the midway mark of the period, the Flames tied things up. The Flames gained possession in the Kings zone and the home side left Gaudreau alone with the puck behind their net. Whoops. Gaudreau found Elias Lindholm sneaking into the net-front area and put the puck right on his stick for a shot that beat Petersen to draw the Flames even at 2-2.
Before the end of the frame, the Flames took the lead. Michael Stone dumped the puck into the Kings end as the Flames began a line change. Ryan Carpenter hopped off the bench, chased down the dump-in, and found Gaudreau skating into the slot all alone. Gaudreau went backhand, putting the puck past Petersen to give the Flames a 3-2 advantage.
Shots were 15-13 Flames (12-10 Flames at five-on-five) and scoring chances 12-11 Flames in the second period.
The Flames played solid defence at five-on-five throughout the third period. They took a few penalties, though, and while the Kings made a good push, the Flames’ penalty kill was up to the challenge and the visitors held on for the tight 3-2 victory.
Shots were 10-5 Kings (5-5 at five-on-five) and scoring chances 9-6 Flames in the third period.

The Flames didn’t play a perfect game by any stretch, but they did a really nice job avoiding wild swings in their game for the most part. They saw their early lead evaporate, but they didn’t respond by playing run-and-gun: they stuck to their system and got some timely goals from their top player(s) to tilt the game in their favour.
In short: they were the better even strength team, as they have been throughout much of their recent  (results-based) cold streak, but they managed to avoid the kinds of lapses that cost them points over the past week or so.

On a night like this, it has to be Gaudreau. When he’s on, he’s one of the NHL’s best players. Playing in a barn where he’s had a lot of success, he was worth the price of admission and an absolute difference-maker for the visitors.
But give stick taps to Markstrom, who was superb in the third period, and the penalty kill as a whole.

There were two. First, Gaudreau’s superb goal to give the Flames a lead in the second period.
The other turning points were all the penalty kills that the Flames had in the third period. The Flames’ PK players were superb to bottle up the Kings and cement the victory.

On Saturday, Brett Ritchie was a late addition to the lineup as Calle Jarnkrok was out with a non-COVID illness. With Ritchie injured against St. Louis and Jarnkrok still sick, Adam Ruzicka slotted in on short notice.
Erik Gudbranson and Chris Tanev combined for eight shot blocks in the game, coming primarily on the penalty kill.

The Flames (41-19-9) hop on a bus and head down to scenic Anaheim. They visit the Ducks on Wednesday night.
Via Pat Steinberg: As of this writing, the Flames’ magic number to clinch a playoff berth is now 7 – any combination of 7 Flames wins or Vegas losses clinches a post-season spot for Calgary. (It’s 9.5 Flames wins and/or Edmonton losses to clinch the Pacific Division crown.)