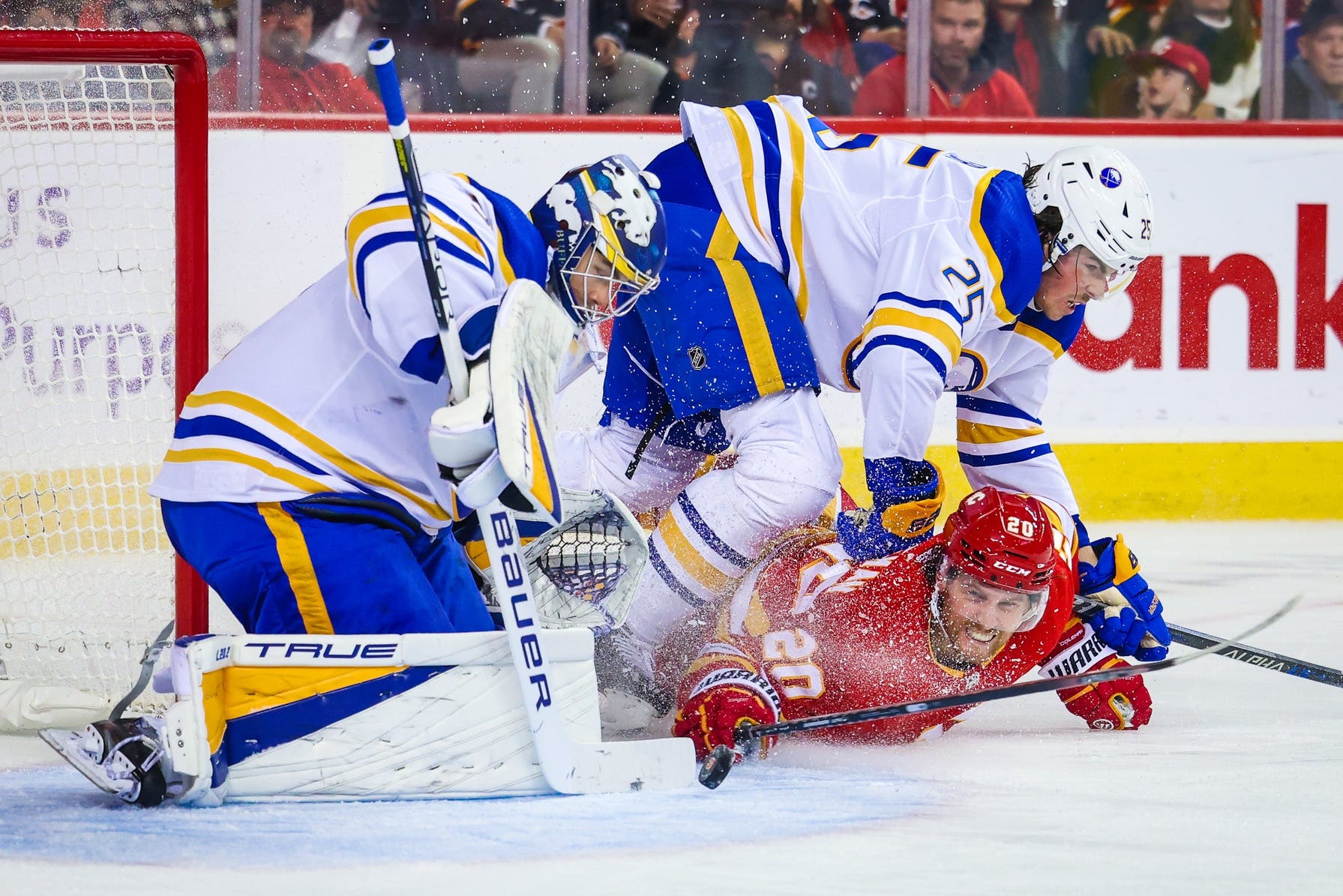 By Ryan Pike
1 month ago
Welcome to our post-game recap brought to you by NHL Lines site Betway!
Friends, we talk about “trap games” so much that it’s become a cliche. After a string of big games against big opponents, teams are bound to be a little bit less tuned-in for a game against one of the league’s lesser lights. On Thursday night, the Calgary Flames had a “trap game” scheduled against the Buffalo Sabres. And they fell into that trap, and were trampled by Buffalo.
The Flames lost to the Sabres by a 6-3 score to snap their season-opening three game winning streak.

The Flames hit the scoreboard early off a really nice shift from Nazem Kadri’s line, something that Flames fans have quickly become accustomed to. After a scoring chance ended up on a Sabres stick, Dillon Dube forechecked down and whacked the puck loose. It was collected below the goal line by Kadri, and he found Andrew Mangiapane cutting towards the slot. Kadri made the pass, Mangiapane made a quick shot, and the Flames had a 1-0 lead.
The Flames’ lead lasted a grand total of 2:13. A scrambly shift in the defensive zone by the fourth line led to a really nice scoring chance from Jacob Bryson, which Jacob Markstrom laid out to stop. But the puck laid precariously on the goal line and Dylan Cozens zoomed in and poked it over the line to tie the game at 1-1.
The Sabres took the lead after a Flames’ too-many-men bench minor. The Flames killed off the penalty, but the Sabres kept pressing and J.J. Peterka found Rasmus Dahlin wandering in from the bench and set up him with a pass right up main street. Dahlin’s shot beat Markstrom to give the Sabres a 2-1 edge.
A little later, the Flames got a power play of their own, surely looking for revenge. The resulting power play was not particularly good – they had a couple chances, but they were pretty disjointed. The Sabres took advantage of this lack of cohesion, with Vinnie Hinostroza stealing a puck and sending Casey Mittelstadt in on a partial breakaway. Mittelstadt beat Markstrom high, clanging it off a post and in, for a shorthanded goal that made it 3-1 Sabres.
First period shots were 16-12 Flames (13-9 Flames at five-on-five) and five-on-five scoring chances were 12-11 Sabres (high-danger chances were 3-3).
Dan Vladar came into the game in relief of Markstrom to begin the second period.
The first shot that Vladar faced ended up in the net, unfortunately. The Sabres wandered into the zone, a bunch of traffic got stacked up, and then Alex Tuch’s shot from the high slot beat Vladar to make it 4-1 Sabres.
The Sabres got a power play a little later and appeared to make it 5-1 after Tage Thompson absolutely leaned into a one-timer, but after a review it was revealed that Thompson’s shot only hit the crossbar.
The Flames had a few looks in the second period but couldn’t translate them into good chances. That is, until the final few seconds of the period. Trevor Lewis dumped the puck on net from the Sabres blueline. The puck was saved by Eric Comrie and booted out, but it glanced off the referee’s skates and hung around the hashmarks area. Jonathan Huberdeau chased the loose puck down, drove the net, then found Lewis sneaking in for a quick back-door feed that beat Comrie to cut the lead to 4-2. Officially, the goal was scored with 1.6 seconds remaining in the period.
Second period shots were 14-10 Sabres (13-7 Sabres at five-on-five) and five-on-five scoring chances were 15-7 Sabres (high-danger chances were 5-2 Sabres).
The Flames shuffled their line and shortened their bench to start the third period, and it led to early results. After a couple strong shifts to begin the period, they sent the new trio of Huberdeau, Mikael Backlund and Tyler Toffoli out. That new line cycled the puck really well, setting up Nikita Zadorov for a shot from the top of the circles with Backlund screening Comrie that beat the Sabres netminder to cut the lead to 4-3.
But the Flames took another penalty right after they drew within one, and Buffalo cashed in. Tuch got his second of the game, toe-dragging around a Flames penalty killer and firing a wrister past Vladar to give the Sabres a 5-3 lead.
Tuch scored into the empty net with 1:25 remaining to complete his hat trick, and complete Buffalo’s 6-3 victory.
Third period shots were 17-6 Flames (15-5 Flames at five-on-five) and five-on-five scoring chances were 13-5 Flames (high-danger chances were 3-1 Flames).

Let’s get this out of the way first, friends: the Sabres aren’t a bad team. They’re a weird team, but they’re full of talented young players that are seemingly primed to take a step. They played fast, they played loose, and they out-hustled the Flames for much of the game.
The Flames aren’t a slow team, but the Sabres’ speed and tenacity made the Flames seem slow and play slow. For big stretches of the game, the Flames just couldn’t keep up with the youngsters. Some of it was probably the “trap game” aspect of things, but don’t discount how much the Sabres frustrated the Flames with how they played the game.

Let’s go with Lewis, since he had a goal and his line generally looked good. Honourable mentions to Backlund and Coleman. Mangiapane was also buzzing around quite a bit.

The Flames were missing blueliner Noah Hanifin, who missed the game due to an unspecified injury/illness. Connor Mackey played for the first time this season in place of Hanifin.
This was Milan Lucic’s 1,100th career NHL regular season game.
The Flames shuffled their lines quite a bit in the third period:
Mackey, Kevin Rooney and Brett Ritchie barely hit the ice in the third period.

The Flames (3-1-0) are back in action on Saturday night when they host the Carolina Hurricanes.
News
Recent articles from Ryan Pike