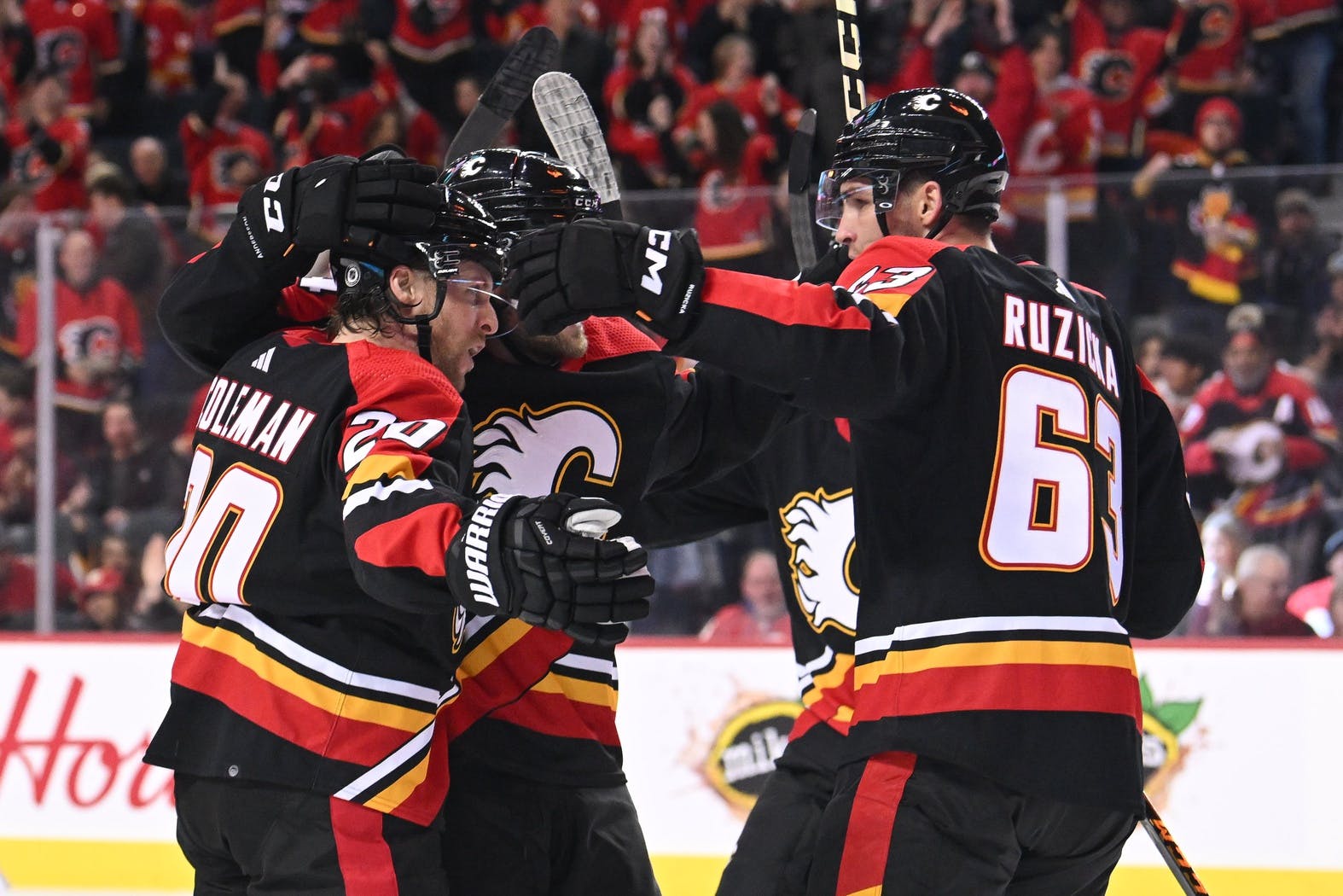 By Ryan Pike
2 months ago
Be sure to check out the latest Flames game day odds from NHL betting site Betway!
The Calgary Flames hosted the Washington Capitals on Saturday night at the ‘Dome, with both clubs coming into the game off recent losses. What transpired was a pretty back and forth, albeit defensively structured, three periods of hockey.
The Flames were a little bit better at executing than Washington, and they skated to a 5-2 victory over the Capitals.

The first period was a bit odd, as both teams had chances both ways but grade-A chances were few and far between. Just when it looked like the period would be without anything on the goals ledger, the Flames managed to light the lamp late in the period.
Mikael Backlund’s line played the pressure game in the Capitals zone, getting some chances and then battling to retrieve the puck and cycle to their teammates. Adam Ruzicka ended up winning a down-low battle, then funnelled the puck to Blake Coleman at the face-off dot to Darcy Kuemper’s left. With tons of time, Coleman picked the corner on Kuemper and gave the Flames a 1-0 lead.
But the Capitals evened it up before the end of the period. Dillon Dube took a roughing minor in the Capitals zone, giving the visitors a late power play. On that man advantage, Conor Sheary got set up by a pass from Sonny Milano that gave him oodles of time in the slot. With that time, he sniped a shot past Dan Vladar to even things up at 1-1.
First period shots were 15-14 Capitals (13-11 Flames at five-on-five) and five-on-five scoring chances were 9-8 Flames (high-dangers were 2-1 Capitals).
The Flames got the lead back early in the second period off a nice series of plays on the rush. Ruzicka led the rush and dished to Backlund. Backlund dished to Andrew Mangiapane, who looked to pass, then pivoted and fired a shot on net. The shot beat Kuemper short-side to give the Flames a 2-1 lead.
Washington backup netminder Charlie Lindgren came into the game late in the second period, as Capitals starter Darcy Kuemper left the game due to an upper body injury.
Second period shots were 14-5 Flames (11-5 Flames at five-on-five) and five-on-five scoring chances were 8-4 Flames (high-dangers were 4-1 Flames).
The Flames pulled away late in the third period with a pair of quick goals.
First, Ruzicka caught Washington’s blueliners sleeping, accepting a Backlund pass at the Capitals blueline and beating Lindgren on a breakaway to give the Flames a 3-1 lead.
55 seconds later, Dillon Dube and Mangiapane drove into the Capitals zone on a rush, with Mangiapane firing a feed from Dube past Lindgren inside the far post to give the Flames a 4-1 edge.
John Carlson scored for Washington with 1:06 remaining in regulation (during a stretch of four-on-four) to cut the Flames’ lead to 4-2, but that’s as close as they got. Elias Lindholm scored an empty-netter late to cement this as a 5-2 Flames victory.
Third period shots were 9-8 Capitals (7-6 Flames at five-on-five) and five-on-five scoring chances were 10-6 Flames (high-dangers were 2-0 Flames).

The Flames played a simple, structured game… and it worked. They didn’t go full Globetrotters on the Washington Generals, to throw a name out there, but they limited quality chances against, got strong netminding, and one of their lines was great in all three zones.
They took way too many offensive zone penalties, but they played well enough to earn the W.

Let’s give it jointly to the trio of Ruzicka, Backlund and Coleman. They were in on three out of four Calgary goals, and Ruzicka and Backlund combined for six points between the two of ’em.
Honourable mentions to Mangiapane, who scored twice, and Vladar, who was extremely sharp early on.

Let’s go with Mangiapane’s goal early in the second period. The Flames desperately needed some traction in a middle period that’s given them some issues this season. They managed to get some nice execution, a great shot, and a lead that they sustained for the remainder of the game.

It was ’90s night at the Saddledome as the club debuted their Reverse Retro jersey, a black variation on their 1990s pedestal design. Game operations went all-out with ’90s themeing, and singer Michela Sheedy even wore a scrunchy in her hair during the national anthems.
This was Backlund’s 850th regular season game with the Flames.

The Flames (11-10-3) are back in action on Monday evening when they host the Arizona Coyotes.
News
Recent articles from Ryan Pike