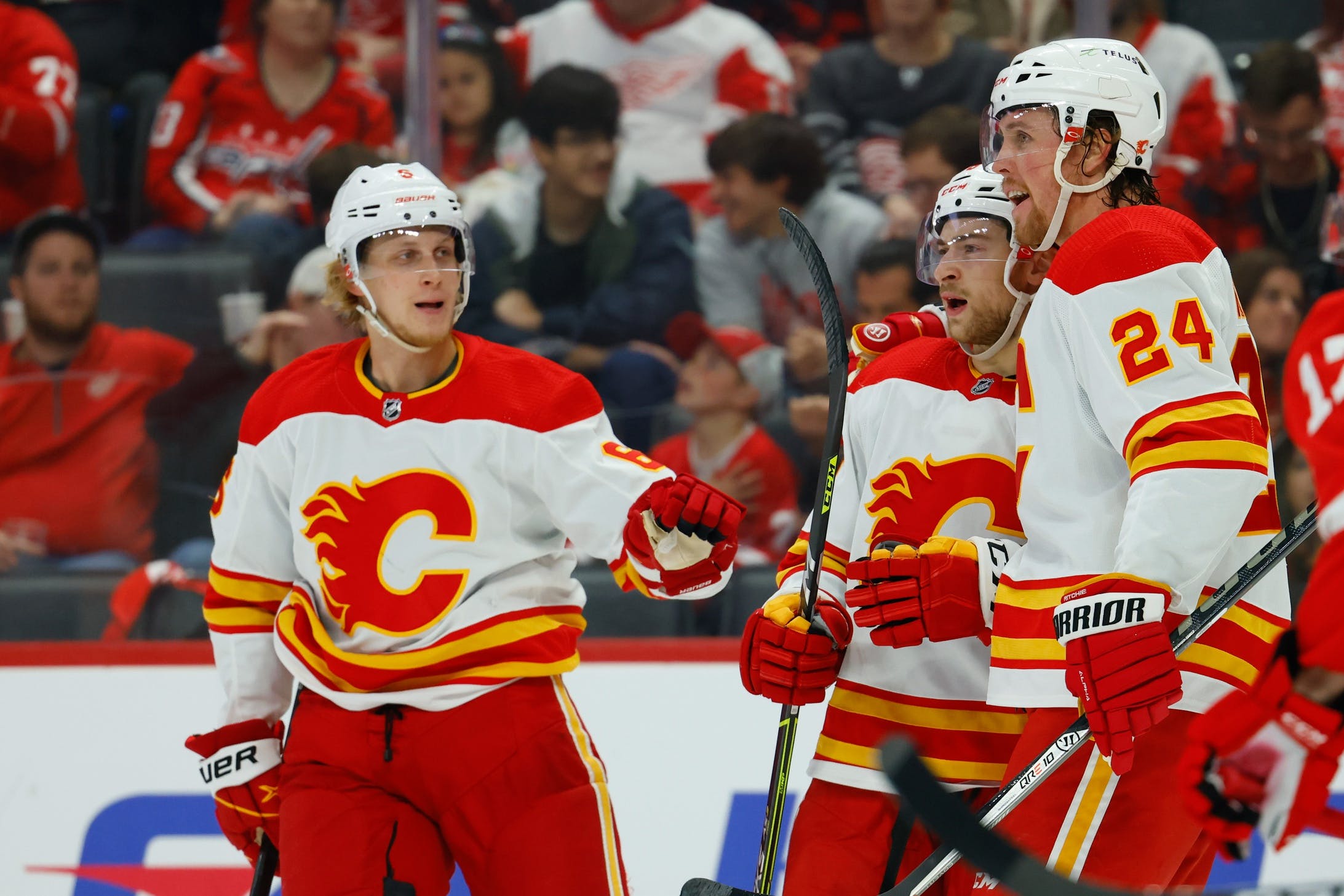 By Ryan Pike
1 year ago
For the first two games of the season, the Calgary Flames arguably out-played their opponents but didn’t get timely goals or big saves from their goaltender. In Detroit on Thursday night, they got timely goals and big saves and despite being out-played for a big chunk of the game, they beat the Detroit Red Wings by a 3-0 score.

The Flames generated some traffic in front of Detroit’s net early on and took advantage of it in the opening period. Midway through the period, Johnny Gaudreau carried the puck behind the Red Wings net. He passed the puck into the slot for Elias Lindholm, and Lindholm put a low shot through a series of legs and past Red Wings netminder Alex Nedeljkovic to make it 1-0 Flames.
The visitors doubled their lead a little later off a nice bit of battling out front. Erik Gudbranson put a shot on net that was stopped but booted out by Nedeljkovic. Andrew Mangiapane won the scramble for the loose rebound and poked it into the open net to make it 2-0 Flames.
Shots were 12-11 Red Wings (all five-on-five) and scoring chances 8-7 Flames in the first period.
The Red Wings came out motivated in the second period. They had the puck a lot, shot the puck a lot, and generated many good chances. But they did not score, and the Flames did a decent job eliminating juicy second chances in front of Jacob Markstrom.
Shots were 14-3 Red Wings (13-2 Red Wings five-on-five) and scoring chances 9-3 Red Wings in the second period.
The third period was more even than the second, though the Flames seemed content just to defend and run out the clock. Matthew Tkachuk scored an empty-netter (from his own blueline) to make this game a 3-0 final score for the Flames.
Shots were 14-7 Flames in the third period.

Well, they were opportunistic and smart early on. And after the got a lead, they relied upon their goaltender and held on for the victory. Their puck management wasn’t great, especially in the second period, and they probably won’t be able to get away with a second period like that against many other opponents.

It’s gotta be Markstrom, who was very steady in net – especially in the second period.
But stick-taps to Gudbranson, who had two assists in the first period.

Honestly, it might just be the entire second period. The Flames managed to get out of a one-sided period unscathed and it was because of that escape artistry that they had a good chance to capture two points in the standings.

The alternate captains were Mikael Backlund, Sean Monahan and Matthew Tkachuk.
Milan Lucic fought Detroit’s Givani Smith in the first period.
This was a weird special teams game for both teams. Power play units for both teams (combined) were out-shot by the penalty kills by a 3-1 margin.

The Flames (1-1-1) are headed to D.C.! They’ll face the Washington Capitals in a brunch game on Saturday with an 11 a.m. MT start time. Grab some coffee and some bacon (and/or waffles)!
Uncategorized
Recent articles from Ryan Pike