Flames Post-Game: Grinding out a point in Nashville 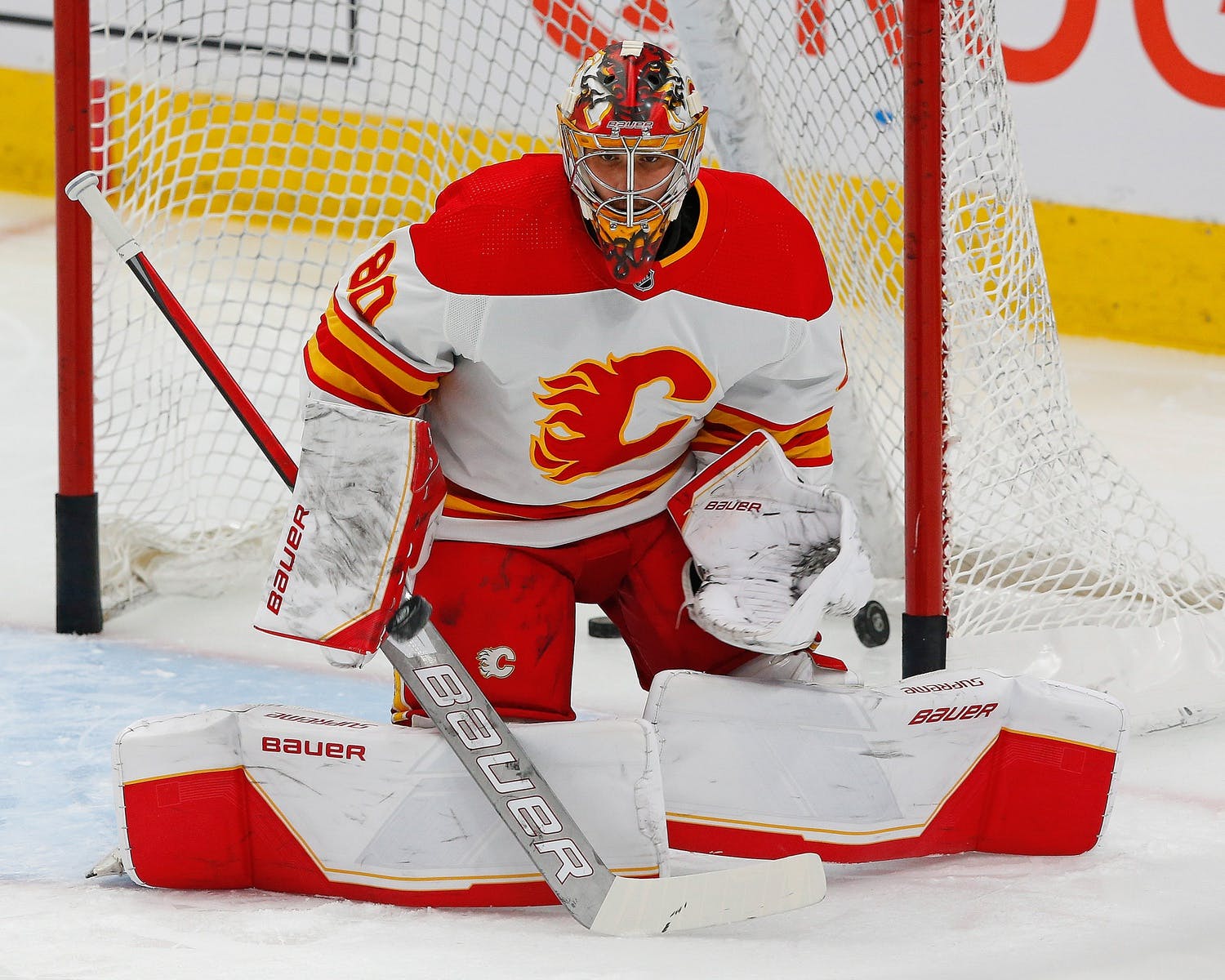 By Ryan Pike
9 months ago
The Calgary Flames headed to scenic Nashville on Tuesday night to (a) face the Predators and (b) play the 10th and final rescheduled COVID postponement game of their season. In a really tight-checking battle, the Flames got off to a slow start but managed to build their game.
In a really tight-checking, playoff style game, the Flames lost 3-2 to the Predators in a shootout.

Neither team scored in the opening period, but it was really intense, tight-checking, and well-played by both sides. The Flames were the second-best team, but they weren’t bad necessarily. Shots were 9-5 Predators (9-5 Predators at five-on-five) and scoring chances 10-2 Predators in the first period.
In the second period, Nashville broke the 0-0 tie. With Nikita Zadorov in the penalty box, the Flames got a scoring chance off the rush. But the Predators disrupted that chance and their power play unit headed the other way. Ryan Johansen fed Filip Forsberg and Forsberg blasted a one-timer past Daniel Vladar to give the home team a 1-0 lead.
The Predators doubled their lead midway through the second period off the rush. Forsberg’s initial chance was stopped by a sprawling Vladar, but the rebound bounced around. A falling Matt Duchene whacked at it, and the puck went off his stick, off Chris Tanev, and into the net to make it 2-0 Predators.
But the Flames got on the board before the period ended. Rasmus Andersson drew a penalty in the neutral zone. The Flames power play needed nine seconds to score on the resulting advantage. Johnny Gaudreau’s shot ricocheted in the net-front area, bonking off Matthew Tkachuk and bouncing to Andrew Mangiapane, who jammed the puck past Juuse Saros to cut Nashville’s lead to 2-1.
Shots were 10-7 Predators (7-5 Predators at five-on-five) and scoring chances 7-5 Flames in the second period.
The Flames tied the game midway through the third period. Tyler Toffoli had a nice scoring chance off the rush, but his stick exploded. Mangiapane took advantage of the confusion, collected the errant puck, and beat Saros to tie the game at 2-2.
Both teams had good looks in the remainder of regulation, but neither team could score. Shots were 7-7 (7-5 Predators at five-on-five) and scoring chances 7-5 Predators in the third period.
This game needed extra time to be decided. The overtime period was excellent, with both netminders making really nice stops on really dangerous chances. The Flames were called for too many men with just over a minute left in overtime, but the Flames managed to kill off the penalty. Shots were 3-2 Predators in overtime.
This game also needed a shootout to be decided. Mikael Granlund scored for the Predators and none of the Flames shooters (Gaudreau, Tkachuk or Toffoli) could score and the Predators won 3-2.

The Flames looked like a team that has played a lot of hockey at different points in this game. That is to say: they looked tired at points, and their execution definitely suffered at different spots in this game because of that.
But y’know who didn’t look tired? Their goaltender. Vladar’s strong play throughout this game both allowed his team to build their game as things wore on and held them in during portions where they had lulls. This was a scheduled loss, but the Flames got a point because their backup goaltender was superb.

Again, it’s gotta be Vladar. But Mangiapane had a pair of goals and deserves a lot of credit for going to where goal-scorers tend to be: the front of the net.
Here’s a representative example of Vladar’s fine work.

The Flames’ power play goal late in the second period was, in retrospect, quite large, as it sent them to the locker room down just a single goal.

Linesman Mark Shewchyk took a puck off the wrist midway through the third period. He was in a ton of pain, but stuck around for the remainder of the game.
Tkachuk’s assist on Mangiapane’s first goal was his 99th point of his career, surpassing his dad’s single-season high.

The Flames (47-20-10) are headed home. They’re off on Wednesday, then host the Dallas Stars on Thursday night.
The Flames have clinched a playoff spot. They’re guaranteed to finish (at least) second in the Pacific Division. Their magic number to clinch the Pacific Division crown is 1.0: any combination of Flames wins and Oilers losses totalling 1 or more clinch a division title for the Flames.