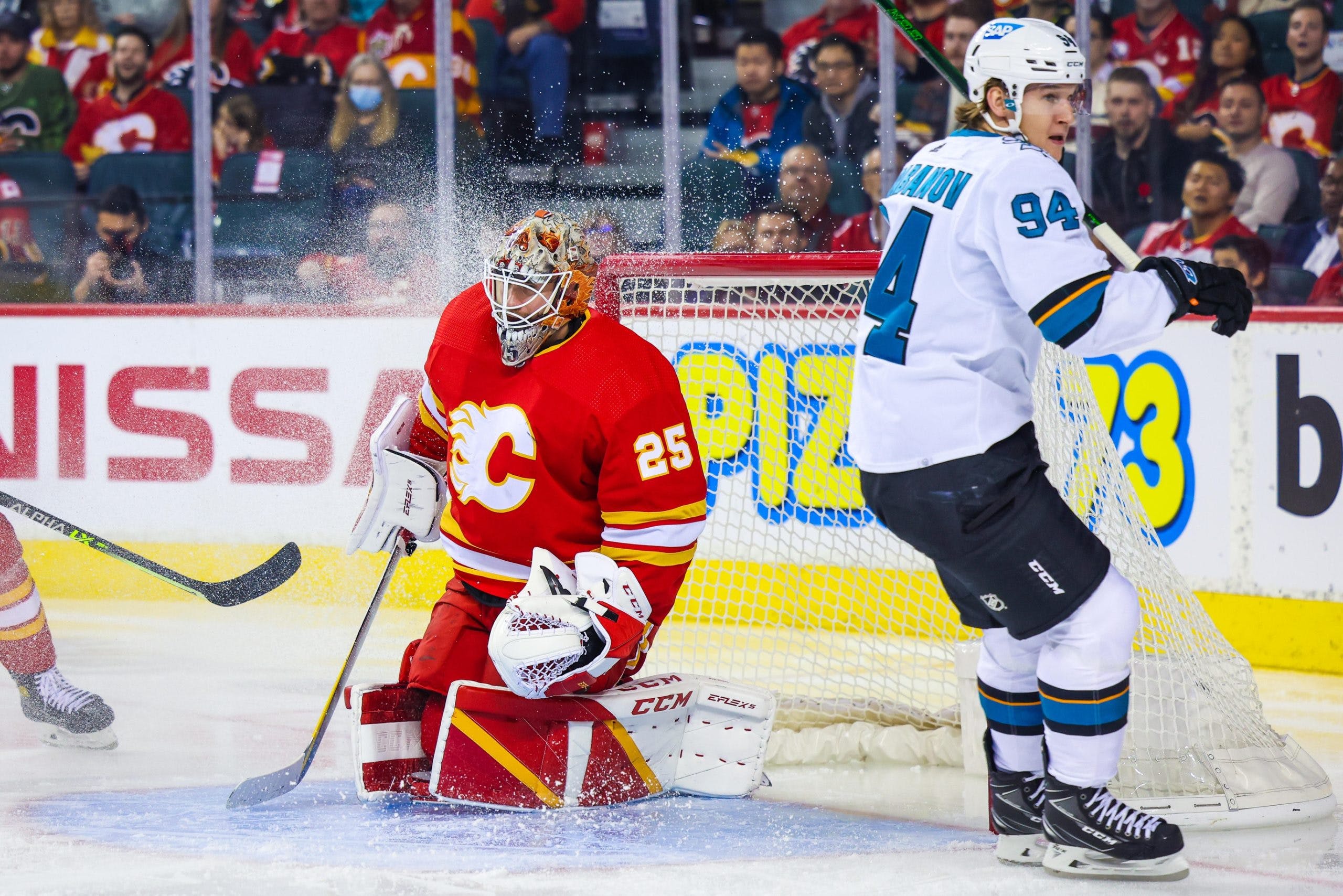 By Ryan Pike
1 year ago
The streak is dead: long live the streak. For just the second time in 12 outings this season, the Calgary Flames left a game with zero standings points to show for it. They generated a lot of shots, but few goals, in a tight 4-1 loss to the San Jose Sharks (a team currently dealing with a COVID-19 outbreak that’s taken out several key players).

Neither team was particularly great in the first period. The Flames took a couple penalties but the Sharks couldn’t do much with their power plays. The Sharks did a good job defending the middle of the ice, but the Flames also had some challenges connecting on their passes – particularly on breakouts.
Shots were 8-4 Flames (8-2 Flames at five-on-five) and scoring chances 5-4 Flames in the first period.
The Sharks got on the board early in the second period, with Alexander Barabanov sniping a shot past the far post on Jacob Markström off the rush (sprung by a gorgeous pass by Brent Burns) to make it 1-0 Sharks.
But the Flames responded back just 30 seconds later with a weird goal. Off a weak initial shot, the Sharks couldn’t corral the puck and there was a scrum around their net. Milan Lucic seemed to cram the puck over the line. (The goal was later credited to Andrew Mangiapane, who made the initial shot.) The play was initially whistled down and a situation room review indicated that yes, the puck crossed. The Sharks challenged for goaltender interference, but that challenge failed and the Flames had the game tied 1-1 after two video reviews of the same play.
Shots were 19-8 Flames (13-6 Flames at five-on-five) and scoring chances 15-7 Flames in the second period.
The Flames had puck management issues in the third period and eventually, they came back to haunt them. After the Flames couldn’t bury their chances in the Sharks end, Logan Couture skated into their zone and chucked a puck towards the net. Nikita Zadorov attempted to tie up a pinching Nick Bonino. But Zadorov inadvertently made contact with the puck, causing it to knuckleball and flutter past Markström to give the Sharks a 2-1 advantage.
The Flames pressed, but Tomas Hertl and Jonathan Dahlen added empty-net goals to ice this one as a 4-1 final.
Shots were 14-11 Sharks (12-9 Sharks at five-on-five) and scoring chances 9-9 in the third period.

Matthew Tkachuk was all over this game. If something was happening in either end, he was front and centre.

It’s gotta be the second Sharks goal. After Markström had made so many nice saves, and the Flames had failed to score on so many nice scoring chances, it had to be a weird fluttery shot that decided this game.

Walker Duehr took warm-up (as an extra skater) but was a healthy scratch.

The Flames (7-2-3) are hitting the road for their longest trip of the season! They begin seven games away from the Saddledome on Thursday night when they visit the Montreal Canadiens.
Uncategorized
Recent articles from Ryan Pike