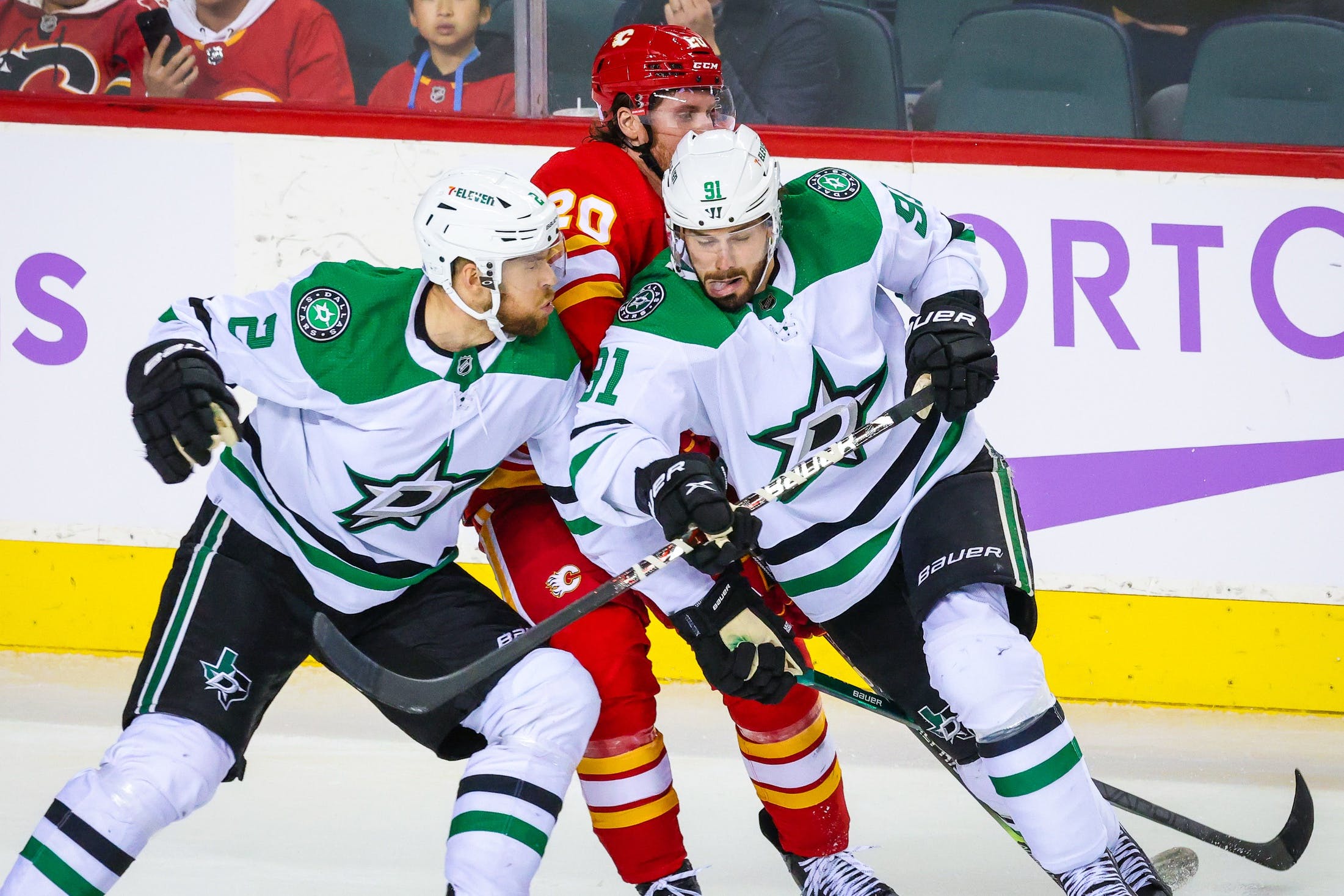 By Ryan Pike
1 year ago
The Calgary Flames weren’t great on Thursday against the Dallas Stars. But they were still pretty good, and while the game wasn’t exactly river hockey it was a nice 60 minutes of tactics, adaptation, and counter-punching. The Flames forced overtime with a nice third period push, but ended up losing to Dallas 4-3 in overtime.

Dallas opened the scoring off a weird sequence. Matthew Tkachuk was given an unsportsmanlike conduct penalty – the Sportsnet TV broadcast theorized that it was for chirping at the referee from the Flames bench. On the resulting Stars power play, Miro Heiskanen found Denis Gurianov’s stick at the side of the Flames net with a scary-accurate low pass for a redirect past Jacob Markström and a 1-0 Dallas lead.
Shots were 10-9 Stars (8-7 Flames at five-on-five) and scoring chances 7-5 Stars in the first period.
The Flames started pressing in the second period and were eventually rewarded with a greasy goal. Late in the period, Erik Gudbranson’s point shot was blocked. Nikita Zadorov tried a point shot of his own, which was tipped by Milan Lucic and trickled over the goal line to tie the game at 1-1.
Back-to-back Dallas penalties gave the Flames a 68-second two-man advantage and they cashed in. After some passing around the perimeter, things sped up and Elias Lindholm set up Tkachuk at the front of the net for a quick shot that beat Anton Khudobin to make it 2-1 Flames.
But late in the period, Dallas tied it up. A puck blooped between Noah Hanifin’s legs at the offensive blueline, leading to a two-on-one rush against Chris Tanev. Michael Raffl fed Blake Comeau for a quick shot that eluded Markström with 5.6 seconds left in the period to tie the game at 2-2. (The puck just found a hole in Markström’s pads above his right pad and below his right arm.)
Shots were 15-7 Flames (11-6 Flames at five-on-five) and scoring chances 9-3 Flames in the second period.
94 seconds into the third period, Dallas got their lead back. Alexander Radulov fired a wrist shot from the right point that deflected off Tyler Seguin’s stick, off his chest, and past Markström to give Dallas a 3-2 lead.
The Flames tied things up on another weird sequence. Dallas took a penalty and on the PP, Markström went to play the puck. He was challenged by a Dallas player and while puck-handling, handled the puck perilously close enough to the below the goal line area to get a penalty. On the resulting four-on-four sequence, some nice skating and passing from Oliver Kylington left Zadorov all alone at the point and his shot beat Khudobin just inside the post to tie things up at 3-3.
Shots were 10-8 Stars (6-6 at five-on-five) and scoring chances were 5-5 in the third period.
It was off to overtime for the second Flames outing in a row. After some chances back and forth, Jamie Benn beat Markström from the high slot on a two-on-two rush to give Dallas a 4-3 victory.

Well, credit where it’s due: Dallas played a very buttoned-up road game. They clogged up the middle of the ice, they battled hard for pucks, and they generally made the Flames work for every bit of ice they wanted to have.
The Flames? Well, they had trouble getting speed and connectivity through the neutral zone and as a result the team looked (and played) slower than usual. They lost more battles than usual, and their puck management was a bit more clunky than usual. The gentlemen in red weren’t bad, necessarily, but they definitely were having an off night by their standards.
But again, give the Flames credit: they battled back, just like they did against Nashville.

Y’know what? Let’s do a joint award for the third pairing. Zadorov got his first goal (and multi-point game) as a Flame, and Gudbranson was quite sharp overall.

The Flames could’ve wilted after their power play in the third period was wiped out by Markström’s questionable penalty – the call itself was questionable – but they managed to regroup and cash in, giving them a chance at two points.

This was Rasmus Andersson’s 200th consecutive game played, second among the Flames in terms of active streaks. Only Johnny Gaudreau (222) has a longer active iron man streak.
Brad Richardson made his Flames debut on the fourth line. He was fine.

The Flames (6-1-3) are back in action on Saturday when they host the New York Rangers.
Uncategorized
Recent articles from Ryan Pike