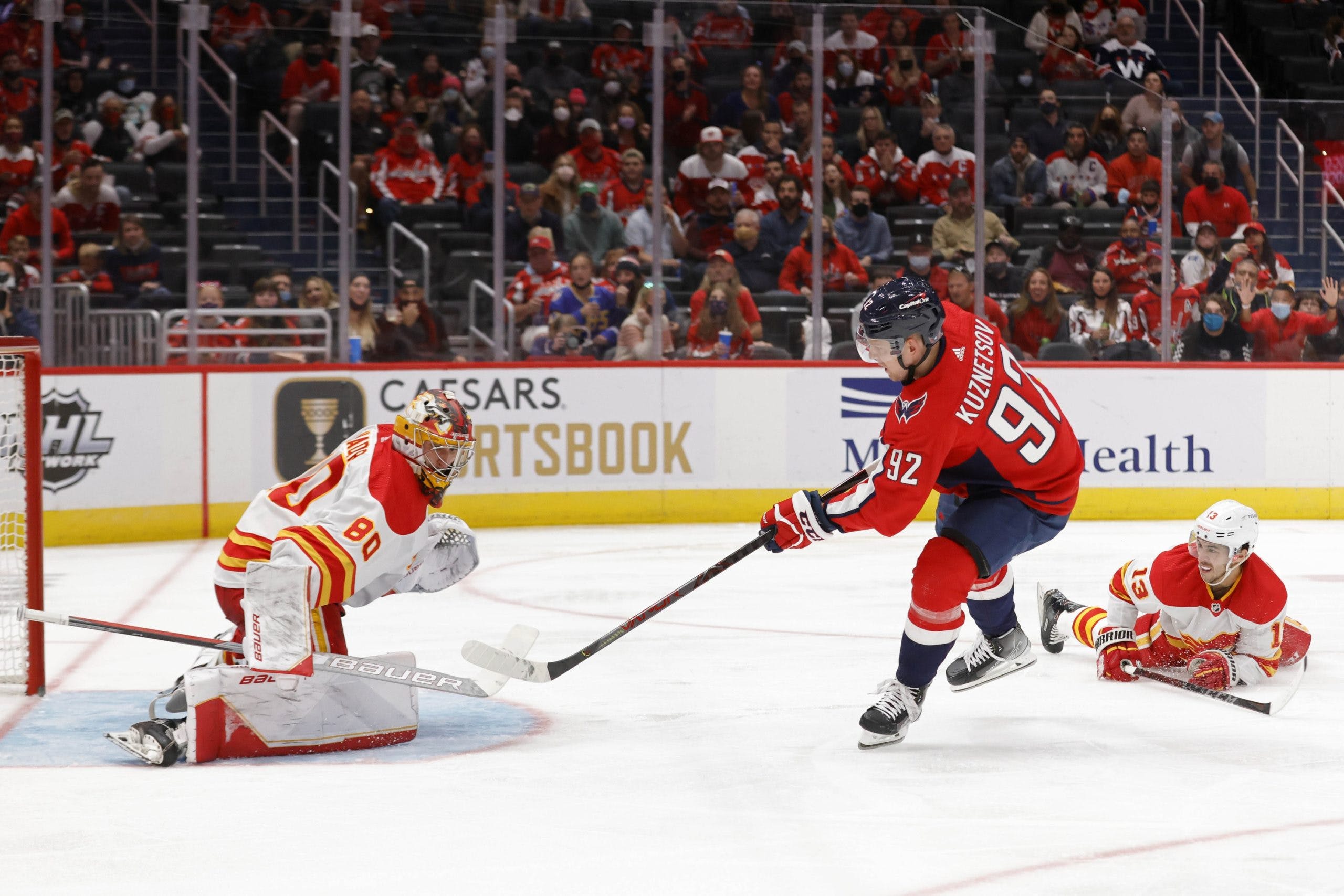 By Ryan Pike
1 year ago
The Calgary Flames played a couple good periods against the Washington Capitals on Saturday afternoon. Their second period, their bad period, almost completely undid all their good work, though. But despite blowing a three goal lead, the Flames managed to beat the Capitals 4-3 in overtime.

The Flames were on their heels a bit to open this game, but they gradually got their feet underneath them with a nice penalty kill and that led to some momentum, a penalty call against Washington, and the opening goal.
On the power play, the Flames opted to begin with the second unit. After a zone entry after a dump-out by the Capitals, the Flames entered the zone and went to work. After some nice puck movement and battles to maintain possession, Andrew Mangiapane opted to drive the net. He chipped the puck over top of Vitek Vanecek to give the Flames a 1-0 lead.
A few minutes later, the Flames scored again! This time at five-on-five, the Flames battled down low for the puck. Johnny Gaudreau won a battle and found Elias Lindholm completely unattended in the high slot. One pass and shot later, and the Flames had a 2-0 lead.
And the period was punctuated by a lovely individual effort from Lindholm on a penalty kill. With Juuso Välimäki in the box, Lindholm chased down a loose puck, muscled John Carlson off that loose puck, then waited out Vanecek and chipped the puck over top of him (as he sprawled to close out the bottom half of the net) to make it 3-0 Flames.
Shots were 14-9 Flames (9-7 Flames at five-on-five) and scoring chances 7-4 Capitals in the first period.
Ilya Samsonov took over in relief of Vanecek in the second period. The Capitals seemed to respond to the swap. The Flames had an early power play, but Gaudreau bobbled the puck on the drop-pass zone entry and Evgeni Kuznetsov grabbed the puck, raced down the ice, and beat Dan Vladar to cut Calgary’s lead to 3-1 with a shorthanded goal.
The lead was further cut to 3-2 midway through the period. Martin Fehervary jumped into the rush with Washington’s top line. The Flames, logically, decided to guard against the pass to the middle of the ice to the Capitals’ forwards. Fehervary, logically, decided to shoot rather than force the pass, and he beat Vladar with a low shot.
And in the waning moments of the second period, the Capitals tied things up. Alex Ovechkin collected a loose puck and raced into the Flames zone on a two-on-one. Rasmus Andersson was torn: guard the pass to the other forward or guard Ovechkin. That indecision allowed Ovechkin to get a clean shot off, which beat Vladar low to tie the game up at 3-3.
Shots were 8-4 Capitals (5-3 Capitals at five-on-five) and scoring chances 9-5 Capitals in the second period.
Both teams had their chances in the third period, but neither could bury them. Shots were 8-5 Flames (all at five-on-five) and scoring chances 9-3 Flames in the third period.
Off this game went to overtime! The Flames didn’t get a ton of good chances, but off a breakout pass from Vladar, Lindholm completed the hat trick as he redirected a puck that trickled through Samsonov’s pads and gave the Flames a 4-3 victory in overtime.

Why the Flames won (in overtime)

The Flames were a bit leaky defensively all game, but they were able to push back against Washington in the first period (high-danger chances were 3-3). But they really failed to adapt to Washington’s renewed push in the second period, and the Capitals were the stronger team for much of the last 40 minutes of regulation.
But that said, the Flames played well enough to get it to overtime – they were much better defensively in the third than they had been earlier on – and they were opportunistic when they had to be to capture two points.

Lindholm had three goals, and his shorthanded marker is one you’ll be seeing replays of for awhile.

Kuznetsov’s shorthanded goal to begin the second period really set the Flames back on their heels and let the air out of the proverbial balloon. From that point on, the Capitals tying the game seemed almost inevitable.

The alternate captains were Mikael Backlund, Sean Monahan and Matthew Tkachuk.
Välimäki took two minor penalties, made the pass that led to a too many men penalty, drew the penalty that led to the opening Calgary goal, and gave Washington a great first period pass with a pizza right to Kuznetsov that ended up hitting the post. He had… a game.
Vladar made his first start (and appearance) in net for the Flames.
Gaudreau got an assist on Lindholm’s overtime winner, earning his 500th point as an NHL player.

The Flames (2-1-1) are headed to the Big Apple. They face the New York Rangers at Madison Square Garden on Monday night.
Uncategorized
Recent articles from Ryan Pike