Flames Post-Game: Flames grab a point in the Twin Cities 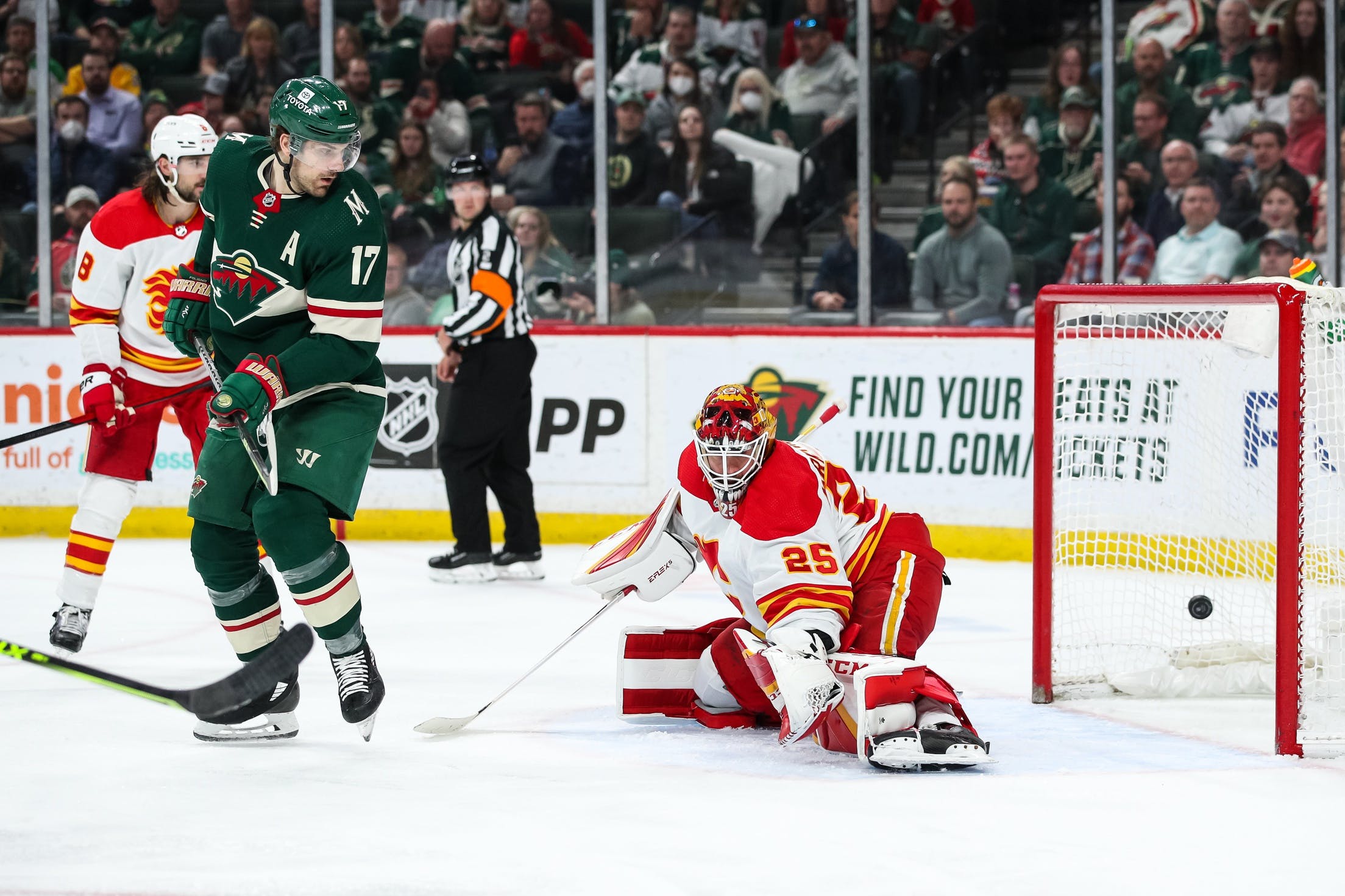 By Ryan Pike
9 months ago
The Calgary Flames began the final back-to-back set of the season on Thursday night against the Minnesota Wild. It was a tight-checking, strategic game for both teams, lacking in physicality but not lacking in smart positional play.
The Wild cashed in twice on the power play, including in overtime, to eke out a 3-2 overtime win over the Flames.

The first period was fairly tight checking, albeit with a few end-to-end scoring chance rushes for each side. Both teams hit the post off nice scoring chances. Jacob Markstrom had to be sharp in the Flames net to keep Minnesota off the scoreboard. He was sharp, so this game remained without any goals through the first period.
Shots were 10-6 Wild (9-6 Wild at five-on-five) and scoring chances 7-3 Wild in the first period.
Early in the second period, the Flames opened the scoring. Nikita Zadorov made a smart play, driving into the Wild zone while everybody else was changing and drawing Minnesota’s defenders to him before he put the puck deep to Matthew Tkachuk. Tkachuk put the puck towards the net for Johnny Gaudreau, who received the pass, eluded Jonas Brodin and chipped the puck past Cam Talbot to give the Flames a 1-0 lead.
But a few minutes later, Mikael Backlund took a penalty and on the ensuing power play, Brodin’s point shot found its way to the net and past Markstrom to tie the game up at 1-1.
Shots were 12-4 Flames (7-3 Flames at five-on-five) and scoring chances 4-4 in the second period.
Midway through the third period, the Wild inched ahead. An icing was waved off and it seemed to throw the Flames blueliners out of whack. Erik Gudbranson threw an uncharacteristic loose puck in his own end, which was intercepted by Frederick Gaudreau and fired quickly past Markstrom to give the Wild a 2-1 lead.
But with just over three minutes left in regulation, the Flames evened things up. The top line got the puck in deep and cycled it around. Eventually, Elias Lindholm fired a puck from the top of the circles that beat Talbot to make it a 2-2 game.
The Flames pressed late, including Gaudreau whiffing on a great pass beside the net, but this game was tied through 60 minutes. Shots were 15-9 Flames (14-9 Flames at five-on-five) and scoring chances 9-8 Wild in the third period.
Rasmus Andersson was called for closing his hand on the puck early in overtime. On the ensuing power play, Kirill Kaprizov one-timed a feed past Markstrom to give the Wild a 3-2 overtime win.

This game lacked the emotion and physicality of the Nashville game, but the Flames were generally pretty good in all three zones. But the Wild are a damn good hockey club playing on home ice, and playing for home ice advantage. The Wild were a little bit better at executing than the Flames were, and they made slightly fewer mistakes.
Case in point? Special teams. The Flames were 0-for-4 on their power plays. Minnesota scored on both of theirs.

Gaudreau got his 40th goal of the season, and was dangerous throughout, so let’s give him the nod here. Give some credit to Markstrom, who was busy and quite good in his return to action after a couple nights off, and Zadorov, who had two assists.

Andersson’s penalty in overtime was the turning point in this game.

Trevor Lewis didn’t dress for the Flames, as he returned home for the birth of his third child. Ryan Carpenter slotted in on the fourth line in his place.
Gaudreau’s second point of the night was his 90th even strength point of the season.

The Flames (50-20-11) are off to scenic Winnipeg for the 82nd and final game of the regular season tomorrow night.