Flames special teams made the difference against Carolina 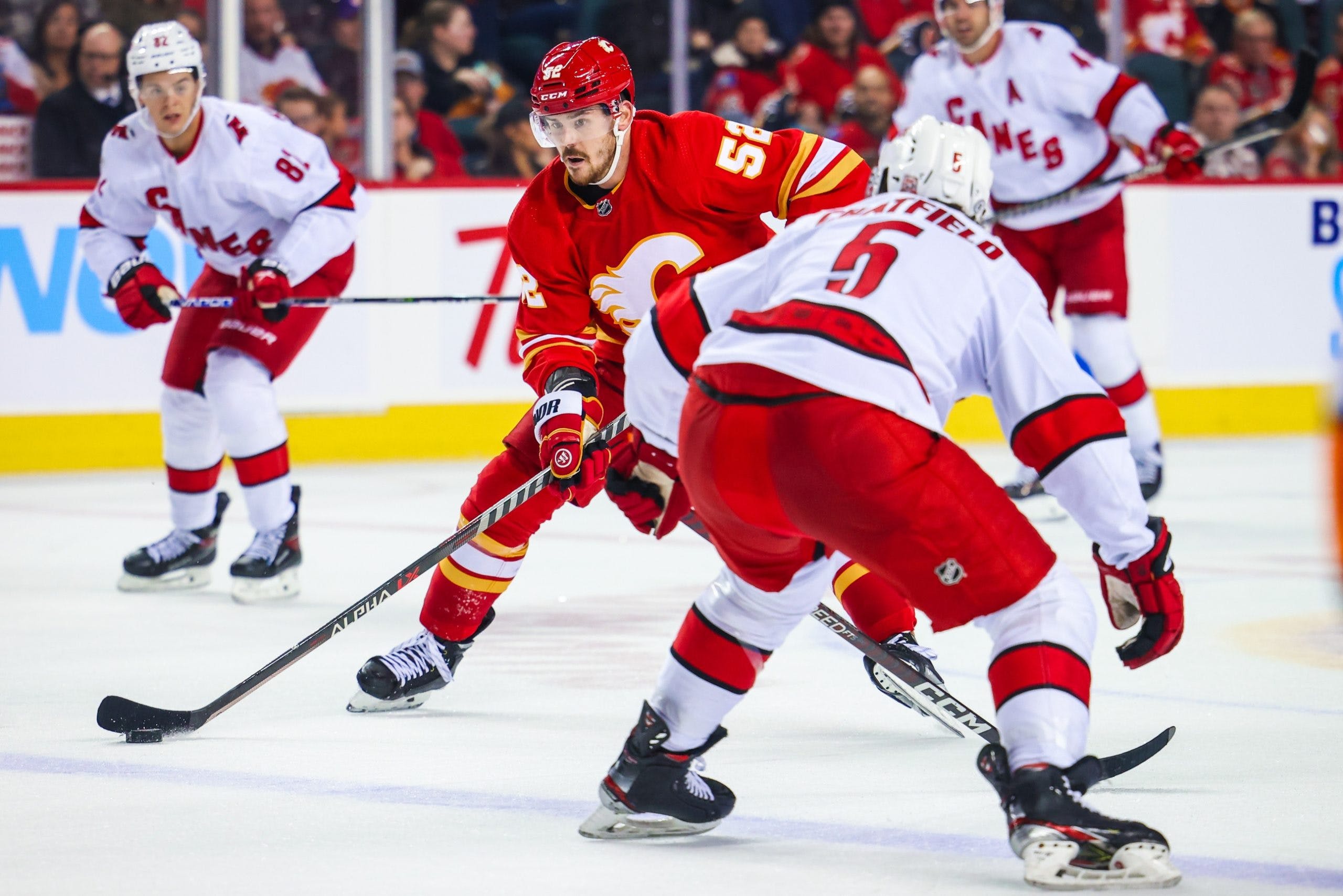 By Ryan Pike
3 months ago
Five games into the 2022-23 season, the Calgary Flames admittedly aren’t yet where they want to be at five-on-five. But for the fourth time this season, the Flames found a way to win on Saturday night against the Carolina Hurricanes.
Through the first five games, the rule appears to be “if the power play scores, the Flames win the game.”
On Saturday, the Flames were out-scored at five-on-five 2-1. But Nazem Kadri scored a power play goal, the Flames killed off a late double-minor penalty, and Tyler Toffoli scored in overtime to get the Flames a 3-2 victory. Jacob Markstrom made 25 saves for his third victory of the season, including 13 stops during the third period and overtime.
“You know, the league’s so much based on special teams, when you look at it,” said head coach Darryl Sutter following the game. “What’s the difference between this game and the last game? Last game they score a shorthanded goal and a power play goal. This game we score a power play goal and the penalty kill, those 10 guys that we use for the four-minute and even the other parts of the game did a hell of a job. And then the goal that’s the winner is three-on-three, so it tells you what the game is about.”
(The “10 guys” they used on the long penalty kill are Chris Tanev, Nikita Zadorov, Noah Hanifin, Rasmus Andersson, Mikael Backlund, Elias Lindholm, Trevor Lewis, Kevin Rooney, Dillon Dube and Andrew Mangiapane.)
Through five games, the Flames at five-on-five have scored 10 goals and allowed 10 goals. But their special teams units combined have out-scored the opposition by a 7-4 margin, with the top unit accounting for all six power play goals scored so far.
Sutter praised his club for being able to make adjustments to their game after the first period against Carolina.
“They play with so much pressure everywhere, right?” said Andersson, noting the adjustments the club made. “They just want to put pressure on you wherever you are. So we just had to put some pucks behind them and get to work in the O-zone. You know as a D-man it’s not fun to go pick up pucks all the time. We made small adjustments, but it worked out. As I said, it was a tough game and it was nice to get the win.”
The Flames were one of the best five-on-five teams in hockey in 2021-22, ranking fifth in Expected Goals percentage (per Natural Stat Trick). After Saturday’s games, they’re 11th – a product of some uneven games with some slow starts and flat periods. We have yet to see a strong 60 minute five-on-five performance from these Flames.
But they’ve managed to find ways to win while they tidy up their five-on-five play, and that’s because of their special teams prowess.
Editorials
Recent articles from Ryan Pike