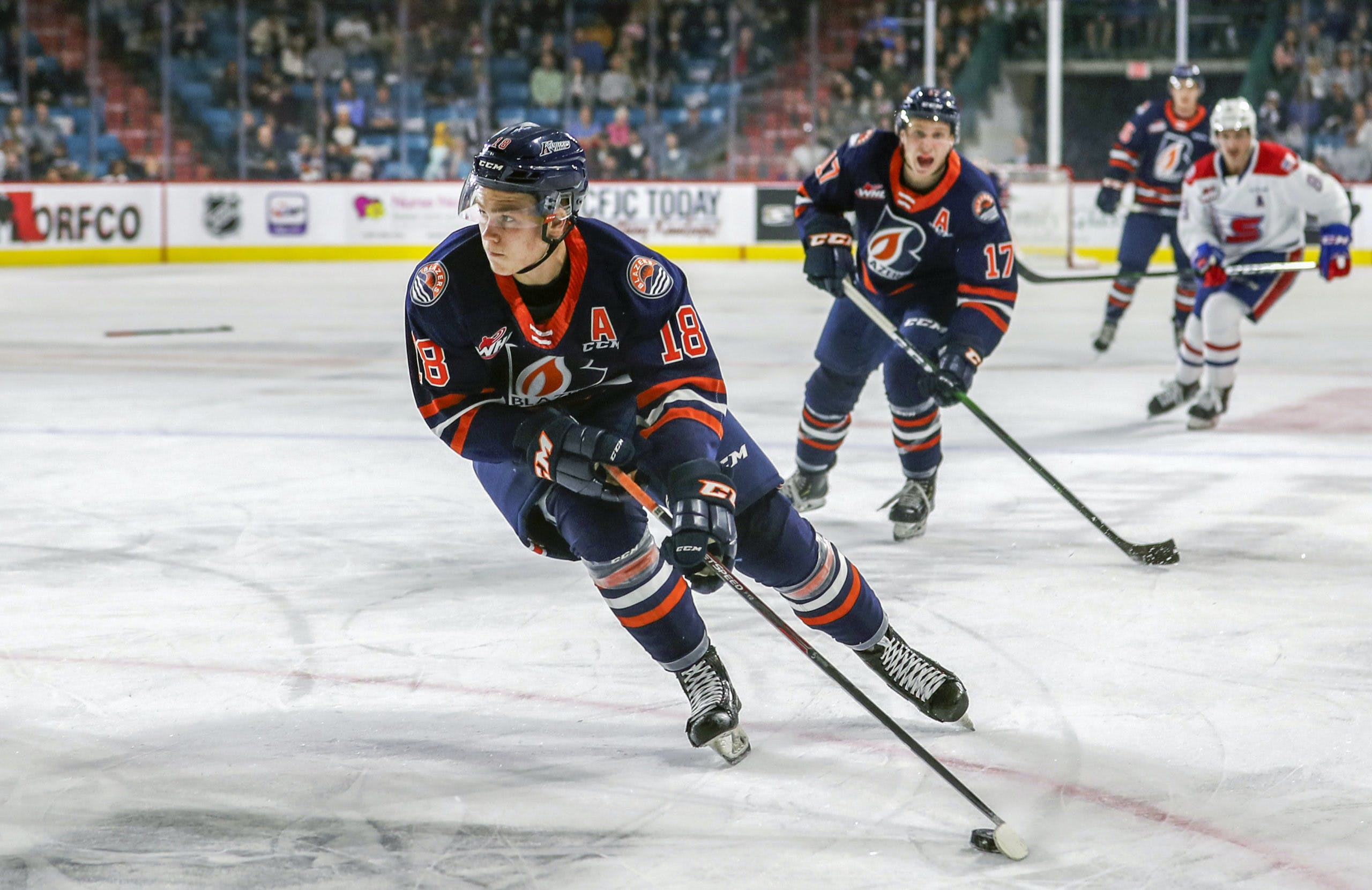 By Ryan Pike
1 year ago
The Calgary Flames’ top affiliate, the Stockton Heat, is finally back playing. On top of that, the European teams are finishing off their regular seasons and seemingly every prospect is playing many games.
Let’s check in on all the Flames’ prospects with our weekly update.

So, uh, Boltmann still has no points. But he’s playing a regular shift on the third pairing in the NCAA in his draft-plus-1 season, so that’s not awful. But mix in a secondary assist here and there, Jake.

Feuk is down in the third division, but he’s doing great and he’s established himself as one of his club’s most reliable offensive players. HockeyEttan’s standings format is a bit confusing, but Kalix should be qualifying for the post-season.

New Brunswick remains a national COVID-19 hot-spot and the next scheduled Sea Dogs game is Mar. 3, though that may be revised if the situation improves. Francis hasn’t played a game since Nov. 18 and he has yet to debut for Saint John.

Kinnvall is injured. HV71 is currently near the bottom of the SHL standings and is in danger of sliding back into the relegation playoffs.

Kirkland was minus-four this week.

The Sun Devils were off this week.

Kuznetsov had one game this week, as UConn’s other game was cancelled. He remains a reliable first pairing defender for a .500-ish NCAA team.

Lerby played his first two North American games this week. He was minus one, but in two games where his team was out-scored 12-2. Small victories. He also earned a secondary assist on one of Stockton’s two goals.

Mackey has one assist (and a plus-one rating) in three NHL games, and a minus-three rating in two AHL games. His first pro season is a work in progress.

Mattson was scratched for the second week in a row. He was a healthy scratch for much of his first two NCAA seasons.

Nikolayev played just over four minutes in his lone game, then missed his next game entirely. We’re presuming he’s dealing with an injury. (Loko’s the top team in the MHL, so they’re playoff bound.)

Nodler had a goal this week, but had a previous goal downgraded to an assist. He’s one of the most reliable two-way players for MSU.

Pelletier had a three point game in Val-d’Or’s only game before their latest bubble ended. They return to bubble play next week riding a seven game winning streak.

Pettersen had some nice energy in his first two pro games.

Phillips had all kinds of good looks for the Heat in his two games. No points, but he was a catalyst.

Philp scored a goal on the power play, one of two Stockton managed to get.

Poolman was minus-three in two games.

Pospisil had a power play assist (yay) but was minus-four (boo).

Minsk qualified for the KHL playoffs and Solovyov had an assist.

Sveningsson had a point-per-game week. Unless standings change drastically, MODO will miss the relegation playoffs and the “regular” playoffs and simply end their season in mid-March.

Tuulola was a team “leading” minus five for Stockton.

Zary was a bit uneven over two games with Stockton (as a 19-year-old). He was minus-two, but was reportedly way less jumpy in the second game.

Chechelev didn’t dress this week, as Chekhov has multiple goalies with them right now and appears to be rotating them through. They’re currently just outside of the playoff picture.

Wolf played one pro game, his first, and got lit up. He was the victim of a lot of turnovers and bounces, though.
Uncategorized
Recent articles from Ryan Pike