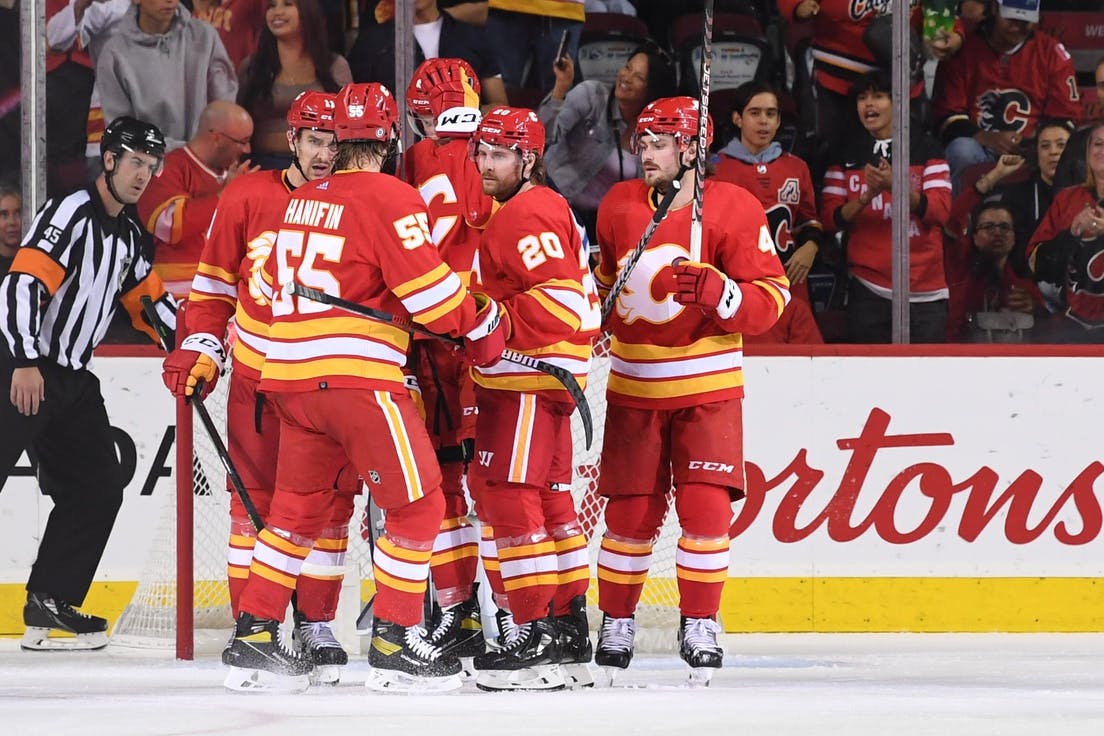 By Ryan Pike
3 months ago
It was an eventful off-season for the Calgary Flames.
Coming off perhaps the most successful season the club had in decades on the ice, the summer saw Johnny Gaudreau sign in Columbus and Matthew Tkachuk decline a long-term contract. But just when obituaries were being written for the Flames, general manager Brad Treliving swung an impressive trade for Tkachuk with Florida, then added Nazem Kadri through free agency.
The Flames enter the regular season with one of the most impressive teams they’ve had (on paper) in decades, and some great expectations to follow a strong 2021-22 season with an even better one.

A brief history of ups and downs

If you’re new here – welcome! – let’s briefly discuss the bumpy progression of Treliving’s Flames regime over the past decade.
In 2014-15, the Flames came to training camp coming off a season where they finished fourth-from-last overall and missed the playoffs by 14 points. But a group that spent the off-season hearing how bad they were supposed to be instead managed to over-achieve, bolstered by a willingness to out-work the opposition and boosted by some incredible puck luck.
Since that season, the Flames have yo-yoed between teams that overachieved and underachieved. Playoff appearances in 2015, 2017 and 2019 were followed by disappointing outcomes in 2016, 2018 and 2020, with hopes raised and then dashed. The rosters, on paper, have gotten progressively better, give or take a free agent signing or two, but the team has historically struggled with two things: enhanced external expectations, and their puck luck regressing.

Several seasons ago, hockey writer Jeff Veillette declared the Toronto Maple Leafs as “Actually Good.” The term has become a bit of a meme in the subsequent years, but it was meant to convey that the Leafs had strong underlying metrics and while they also had strong puck luck, their strong fundamentals were what was the key to their success. The flashiness and hype was smoke and mirrors around a team that was fundamentally strong and, well, Actually Good.
We had this concise summary of Darryl Sutter’s coaching impacts last April:
In short: Sutter’s made the team more consistently dangerous and potent offensively at five-on-five, and both sides of special teams have also improved. They’re more or less as leaky defensively than they were under Ward early last season, but the frequency and danger level of the chances they give up has been lessened by a more sustainable checking style. (When they’re bad defensively, the team doesn’t implode or anything.)
Sure, the Flames may have had some players riding shooting percentage heaters, but the success of the team was underpinned by a structured puck possession game in all three zones.
And a coach that seems hellbent on ensuring that internal expectations are the only thing that matters to his team.

Additions, subtractions, and the Sutter factor

Since his arrival, head coach Darryl Sutter has repeatedly brought up the team needing to focus on internal expectations rather than the outside noise of external expectations. As in, rather than reacting to what others are saying about the club, the team needed to focus on their own benchmarks and goals.
After the whirlwind off-season, external expectations of the team are high. And the brief glimpses and hints we’ve gotten from players of their own goals – a few have mentioned trying to win a Stanley Cup – it seems internal expectations are lofty, too, even if Treliving and Sutter are both insisting that they can’t accomplish anything without qualifying for the playoffs first.
Sutter is a good coach. He’s got a good staff around him. But this season will probably be the one that shows their real mettle, as the club tries to break out of their up-and-down cycle. The Flames are adding several new players to a team that was very good last season, with Jonathan Huberdeau, MacKenzie Weegar and Nazem Kadri being foundational pieces for the next several seasons of the team. The Flames need to maintain focus on their goals while integrating a bunch of new, important players into a team with an established system and identity.
And they have to do all of that while trying to tune out a vortex of external noise from throughout a hockey world that will start planning a parade when they do well and start writing their epitaph when they struggle.
Welcome to the 2022-23 Calgary Flames season. There are great expectations for this hockey club, perhaps moreso than in decades. We’ll see if they can live up to them.
Editorials
Recent articles from Ryan Pike