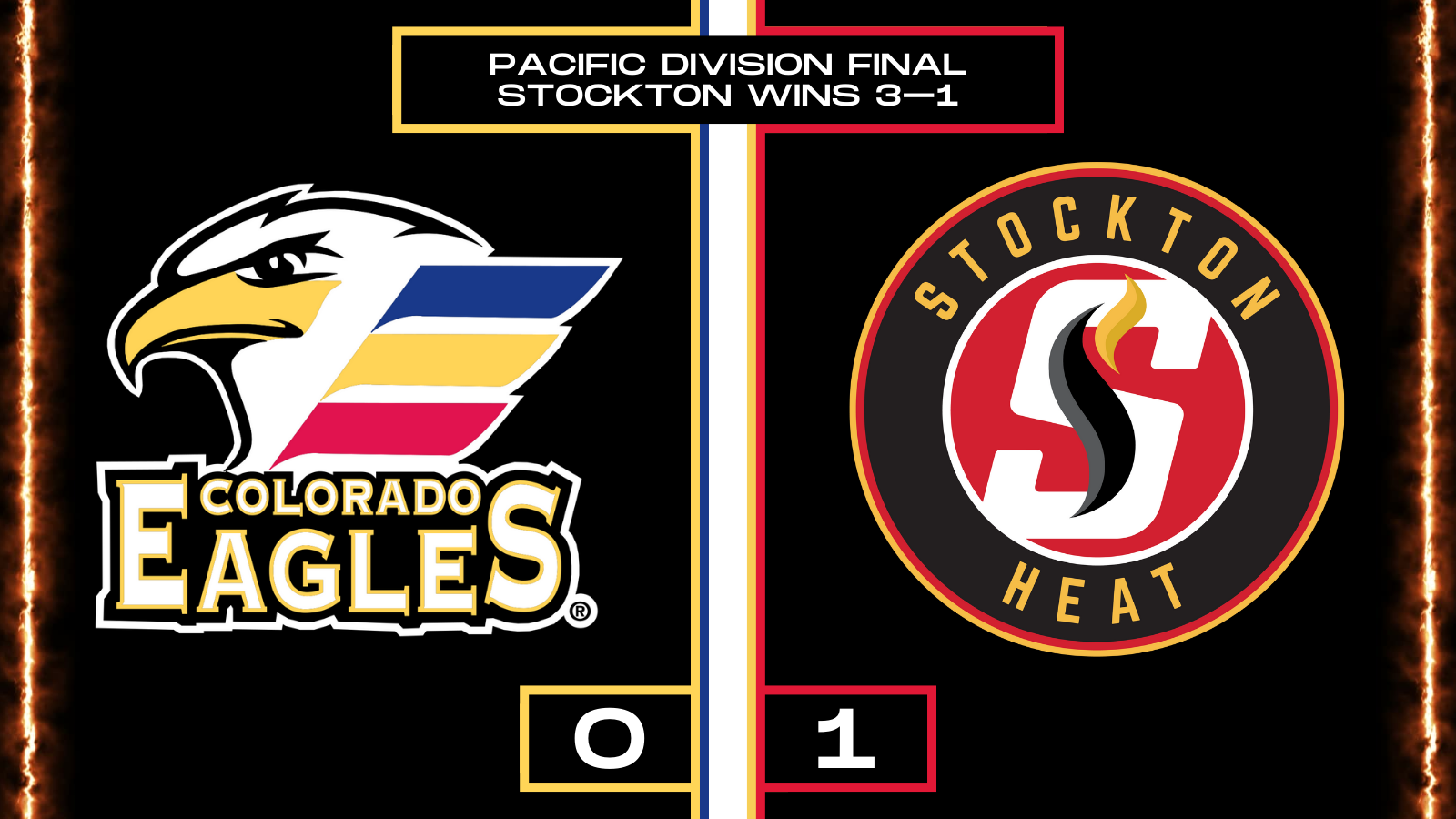 By Paige Siewert
7 months ago
The Stockton Heat geared up for their second potential elimination game against the Colorado Eagles on Sunday night and prevented this series from going any further with a 1-0 regulation win. Dustin Wolf picked up his third pro shutout and his third shutout of this series. Justin Kirkland continues to be one of the quiet MVP’s on this team and scored the third game-winner in this series to put the Heat past the Eagles.

If the score isn’t enough to convince you, this game was tight. Colorado was playing to extend their playoff run and Stockton was looking to close the door. It was a clean first 40 minutes of hockey to get this game started. No scoring through the first period and really not a lot of whistles to accommodate it either.
In the second, penalty minutes started to climb but neither team was able to capitalize on the man advantage. Colorado even had 20 shots in the second period and Dustin Wolf continued to be solid and turned away every single one of them.
Maybe come post-season there will be a conversation about how Justin Kirkland pumps himself up between periods because whatever it is, it is working. Justin Kirkland scored the first and only goal of the night within the opening five minutes of the third period like he had done in the opening minutes of the second period for the Heat’s last two wins against the Eagles.
This goal would go on to take the Heat all the way to the next round with no answer back from the Eagles before time ran out on this game. There was some heavy zone pressure in the last minute, but Wolf stood tall and poised to put this game and series away.
Colorado finished ahead 40-35 in shots and played a solid series against the Pacific Division leaders. The best of five series finished up with a 3-1 record for the Heat. There was a little sprinkle of deja vu this round with all three game-winning goals coming from Justin Kirkland and all three wins a direct result of a Dustin Wolf shutout.

The Heat have officially earned and played their way through the Pacific Division and remain as the last team standing through a first-round bye, a series sweep and this most recent series win. They will now gear up for the Western Conference Finals where they will play the Chicago Wolves, who narrowly snuck past the Heat at the end of the regular season and were crowned the best team in the league. This series could be some of the toughest hockey they play in the 2021-22 season.
The Calgary call-up reinforcements did end up arriving for this game, sliding Adam Ruzicka, Juuso Valimaki and Connor Mackey back into the lineup and Adam Werner dressed as Dustin Wolf’s backup. The Heat will have a few days to prep for the Wolves and will play game one in Chicago on Friday, June 3 at 6:00 p.m. MT. This round transitions into a seven game series format with the games following scheduled for June 6, 8, 10, then June 11, 14, and 15 if needed.
The Stockton Heat are now eight wins away from the Calder Cup and still maintain the momentum to make this a realistic possibility in the 2021-22 postseason run. Playoff games can be caught on AHL.tv and Friday’s game will set the tone for their very important series against the Chicago Wolves.