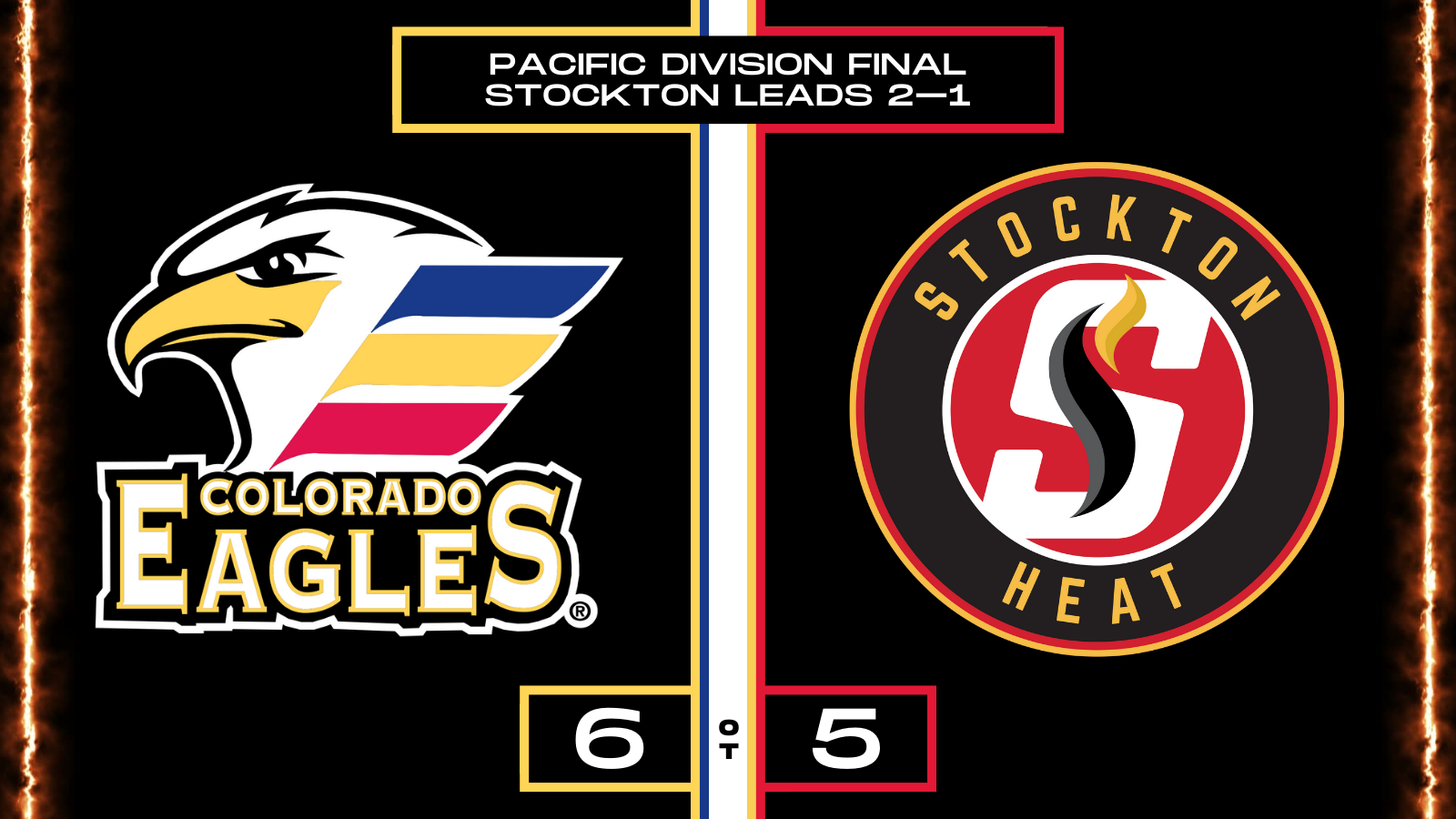 By Paige Siewert
6 months ago
The Stockton Heat and Colorado Eagles squared up for game three of their best of five series on Friday night and Colorado showed they are not going down without a fight. After falling the last two games and with game two only providing one goal, Friday was action-packed and full of scoring to take these teams outside of regulation. The Eagles would turn out to be the overtime heroes and stay alive long enough to at least force a game four. They beat the Heat by a final score of 6-5.

No shortage of goals

Friday night hockey rarely disappoints and this game was a strong example of that. After playing the first two games in Stockton, the Eagles finally got their shot at some home ice advantage. With a crowd pretty much tripling Stockton’s average attendance, over 5,000 fans came out to rally behind the Eagles. This came at the right time for them and could very well be part of the reason they are alive to see another game in this series.
These teams made it halfway through the first period without any scoring action and at 11:26 into the game, the Eagles were the first to strike. Matthew Phillips answered back about two and a half minutes later and got some production going for the Heat with a goal assisted by Jakob Pelletier.
Jakob Pelletier built off that scoring and picked up a goal of his own in the trail end of the period. Ilya Solovyov and Matthew Phillips got the helpers on Pelletier’s third goal of the playoffs.
This wrapped up the first period with the Heat on top by a score of 2-1. In the second period, the scoring run continued with Matthew Phillips picking up another goal, this time on the power play.
The Eagles needed a momentum shift to prevent this game from getting out of hand and got exactly that with two more goals by the end of 40 minutes. By the end of the second period, the Heat and the Eagles were tied up at three a side.
In the third, a pattern of back and forth scoring started with a goal by Walker Duehr 1:10 into the period.
48 seconds later, the Eagles answered back and brought this game back to a tie. Just under two minutes later, the Heat once again took back the lead with Martin Pospisil’s first goal of the postseason.
This was almost enough to punch the Heat’s ticket to the next round of the Calder Cup playoffs but the Eagles snuck one more goal past Dustin Wolf to force overtime.
The overtime frame played out with the Eagles out-shooting the Heat 7-6. On the seventh Eagles shot, the game-winner was scored and the Heat settled in to stay in town for a couple of extra days with no series-deciding fates taking place on Friday night. The Heat finished up out-shooting the Eagles 44-38 but fell short in overtime 6-5. Matthew Phillips had an exceptional individual performance for the Heat in this game, finishing up with two goals and an assist.

Down come the ringers

With the Flames out of Stanley Cup contention, there is a silver lining for the Heat. Their regular roster players that got sent up for back-up or to get a few games in during the regular season, are available to come back down to Stockton to compete in their Calder Cup run.
This includes Juuso Valimaki, Connor Mackey, Adam Ruzicka and Adam Werner. AHL transactions and the Flames organization have already shown this move has already taken place. However, it was too quick of a turnaround for these players to be available for this game. They will likely return for game four on Sunday at the earliest.

This was the Heat’s first loss of the playoffs and Game Four on Sunday could be a huge swing game if the Heat are unable to close the series. This best of five series sits at a 2-1 series record for the Heat. They’ll have some more meat in their lineup and hopefully those players are able to slot in without any issues. Game four will get started on Sunday evening at 7:05 p.m. MT in Loveland, Colorado.