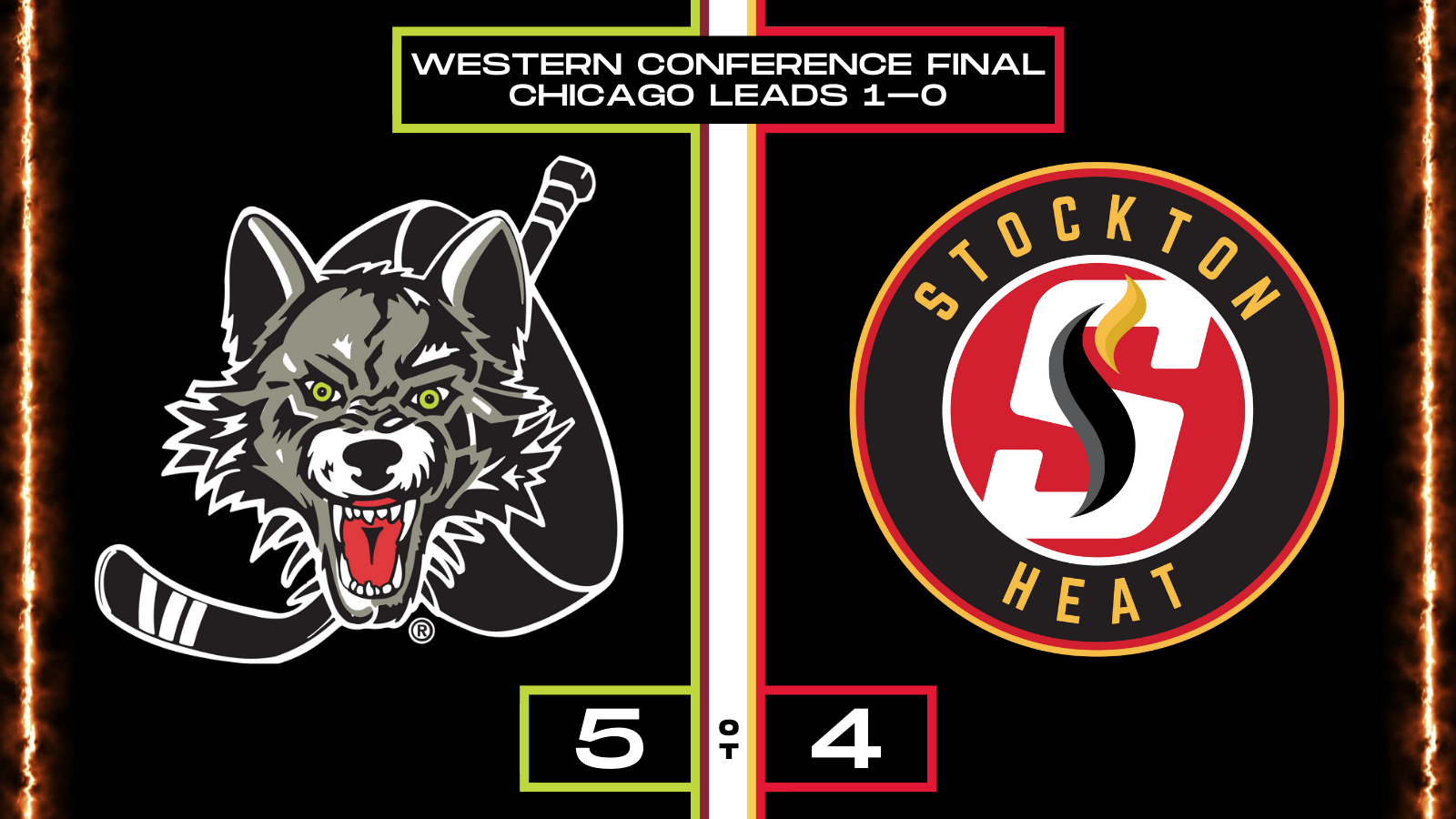 By Paige Siewert
6 months ago
The Stockton Heat kicked off their Western Conference final match-up against the Chicago Wolves on Friday night. This series features two heavy hitters that fought for the top spot in the league for the majority of the regular season. Stockton held that spot for quite some time but was overthrown in the season’s final days, making the Wolves the regular season champions.
These teams have not faced each other all season and have actually never played a playoff series before. They will have a little more time to feel each other out in this round as it will be played as a best of seven whereas the last rounds have been played best of five. The Wolves jumped to an early series start with a 5-4 overtime win in Game One.

Getting to know the opposition

You can watch all the game film and study all the scouting reports you want, but you really don’t know how a team is until you play them. Game One was an interesting dynamic for these two as emotions are high for how meaningful these games are but the expectations are unknown. There was a bit of pushing and shoving already in the opening half of the first period so these two wasted no time getting that aspect of playoff hockey going.
In the playoffs, both teams had perfect records when they scored first. Chicago tacked one more onto that record when they opened up the scoring in this game too. The Wolves made it to the scoreboard 6:09 into this game with a goal by power play goal from former Flame Josh Leivo off the rebound. Leivo will be a player the Heat need to keep their eye on as he’s up to an eight game point streak and eight goals in the playoffs. Maybe they can give a call up to Calgary for some pointers…
The Heat were able to answer back in the first with Luke Philp’s first goal of the playoffs. Martin Pospisil set up Philp and beat Wolves goaltender, Alex Lyon with a deflection.
They finished up the first period tied up at one. In the second, the Heat got off to a very strong start to earn themselves what typically would be a pretty comfortable lead. But this is playoff hockey after all.
Walker Duehr scored on a breakaway just shy of three minutes into the second period. His goal was assisted by Alex Gallant and Byron Froese.
Eetu Tuulola scored about a minute and a half later when he caught Lyon playing the puck awkwardly and scored before he could get back into position to make a save. Justin Kirkland and Andy Welinski picked up assists on the Heat’s third goal of the night.
The Heat finished up their second period scoring in the first five minutes, while the Wolves tacked some onto their side of the scoreboard more towards the middle of the period.
Jalen Chatfield scored the second Wolves goal followed up by another power play goal from Josh Leivo. By the end of the second, they were tied up at three.
As you have probably guessed, the third period finished up with a tie to force overtime. This occurred after each team picked up one more goal in regulation starting with Chicago’s fourth from Stefan Noesen on the power play. Almost exactly a minute later, Connor Zary scored his first goal of the playoffs off a breakaway with Andy Welinski and Connor Mackey both picking up their second assist of the night.
Time ran down in regulation and shots finished up 38-27 through 60 minutes of play. In overtime, it only took the Wolves 2:26 to score the game-winner off their second shot of the extra frame. Juuso Valimaki and Dustin Wolf were both sprawled out on the ice from a previous shot, leaving quite a bit of net to aim at to put this game away. The Wolves take game one and the series lead with this 5-4 win.

The biggest weakness of the Wolves this game? Breakaways. The biggest weakness of the Heat? Their penalty kill. Both can be quite detrimental against a solid team but it was the power play that stung the most.
The Heat had an insanely good penalty kill percentage through the regular season leading the league at 86.6%. That’s not the special teams effort that was shown in this game. Chicago went three for three on the power play on Friday with Josh Leivo getting a point on every single goal.
The flip side of that was two breakaway goals from Luke Philp and Connor Zary. Both were forwards who had yet to have scored in the playoffs this year. If they can continue to find success with those sorts of plays and lock down the penalty kill, the Heat can put themselves in a much better position going forward in this series.

The Heat will stay in Chicago for the weekend and continue their series for Game Two on Monday night before they return home for Games Three and Four. Game Two is available on AHL TV and will get started at 6:00 p.m. MT.