Heat Playoff Post-Game: Stockton sends Bakersfield packing and advances to the next round 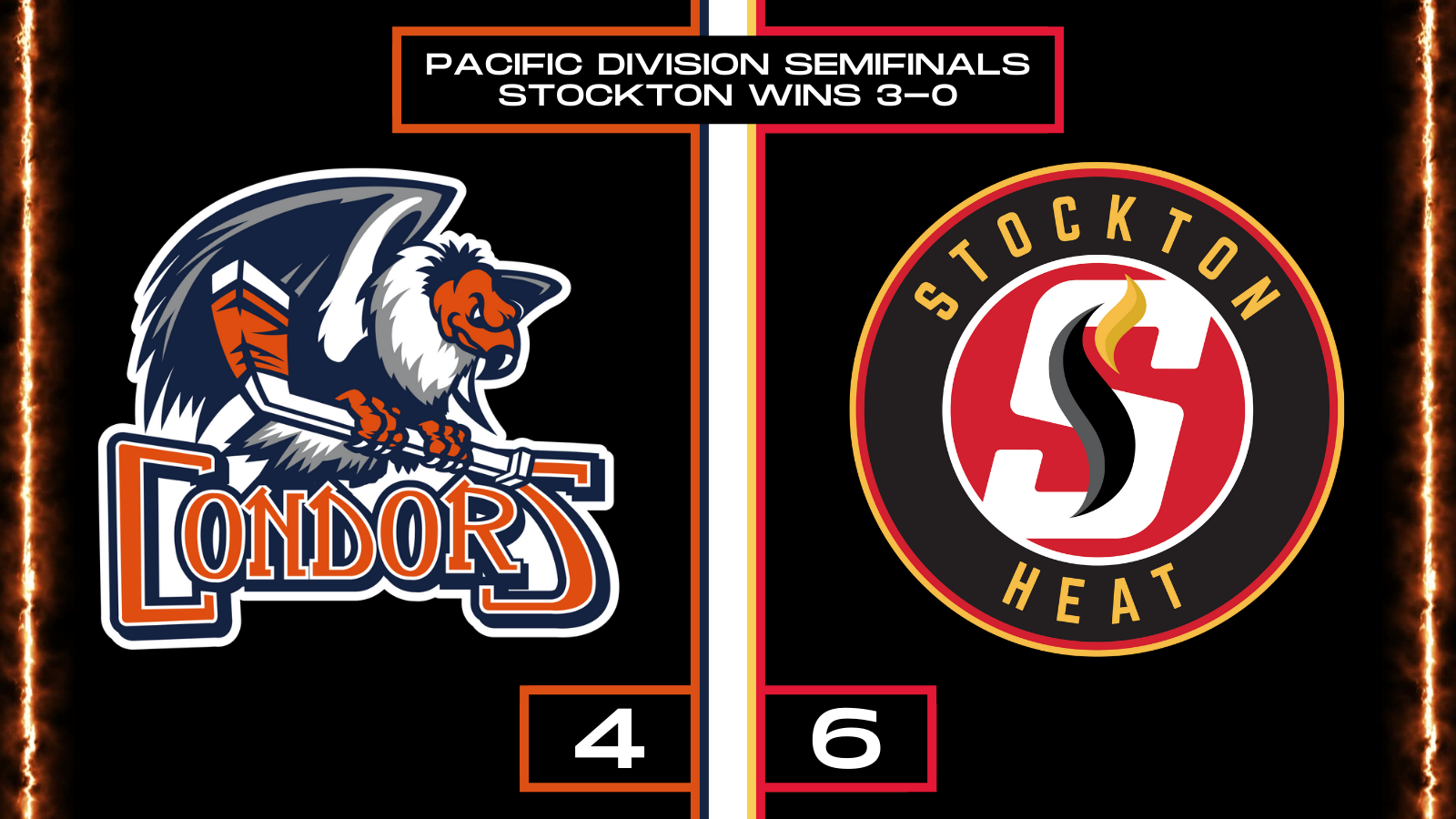 By Paige Siewert
6 months ago
It was a big night for the Stockton Heat as they did what the Flames were unable to do and won their game and advanced to the next round of their playoff run. The Heat beat the Condors 6-4 to complete their best of five series sweep with a 3-0 record and to send Bakersfield off on an early summer break.

Racking up the points

The Heat had quite a bit of success against Bakersfield in the regular season. Only falling four out of ten times in the regular season with most of those losses coming very late in the season when depth lineup players were getting some ice time and top Heat players were resting up or up with Calgary hoping for an opportunity.
This game shaped up to be a good night when your team can hit the ice and score six goals. It’s an even better night when it’s done in some of the biggest games of the year such as an elimination game in the playoffs. Without getting too ahead of ourselves, it is worth recognizing that the Heat have not slowed down and playoff jitters, if any, are not substantially affecting their game.
With Emilio Pettersen and Dustin Wolf being some of the best players the last two games, this third game brought in some individual efforts that were definitely due for some scoring activity. Byron Froese, Luke Philp, Jakob Pelletier and Glenn Gawdin all had multi-point efforts in this match-up that helped secure this huge win.
Jakob Pelletier hit the scoreboard first with an opening power play deflection goal 7:51 into the game.
The Condors answered back on the power play about a minute and a half later and the first period finished up tied at one.
In the second, the Condors scored again less than a minute into the period and caught a little taste of a lead against the Heat. Byron Froese came to crash the party about 30 seconds later with an unassisted goal. He faked out the Condors goaltender appearing to look for a pass and before he knew it, the puck was in the back of the net.
Glenn Gawdin was the next scorer at 7:05 into the period with a diving play that earned him a highlight reel style goal. If you’re going to watch any goal from this game, you’ve got to see this one.
Before the middle frame could come to an end, the Condors got one more goal and tied everything up at three a side.
The Heat buckled down in the third and earned their share of scoring starting with a power play goal by Nick DeSimone.
Glenn Gawdin picked up his second point of the night of DeSimone’s tally and rallied enough to get another point added to his stat line off of Walker Duehr’s third period goal on a partial breakaway.
Bakersfield’s final goal of their night and ultimately, of their season came at 11:57. To top everything off, Justin Kirkland scored an empty-netter with two seconds to go and inserted himself on the long list of Heat players that provided a game-winning effort in this Friday match-up.
The final score finished up at 6-4 with Bakersfield slightly ahead 42-41 in shots. Goaltending match-ups stayed the same as they were all series with Dustin Wolf in net for Stockton and Stuart Skinner in net for Bakersfield. This series win shaped up to be the Heat’s first playoff series win in team history.

Hurry up and wait

There is not much for the Heat to do until their next series other than staying healthy and fresh and take a bit of rest if possible. They will wait to see how the rest of the Ontario Reign and Colorado Eagles series goes to determine who they will face in the Pacific Division Finals in the next round. That series sits at 2-0 for the Eagles and the earliest their series could come to a close is this upcoming Sunday.
The Heat will standby in the meantime and prepare for their postseason journey to continue in the near future. Game times and opponents TBD.