Heat Post-Game: a 3-2 win on a night of firsts and pro milestones 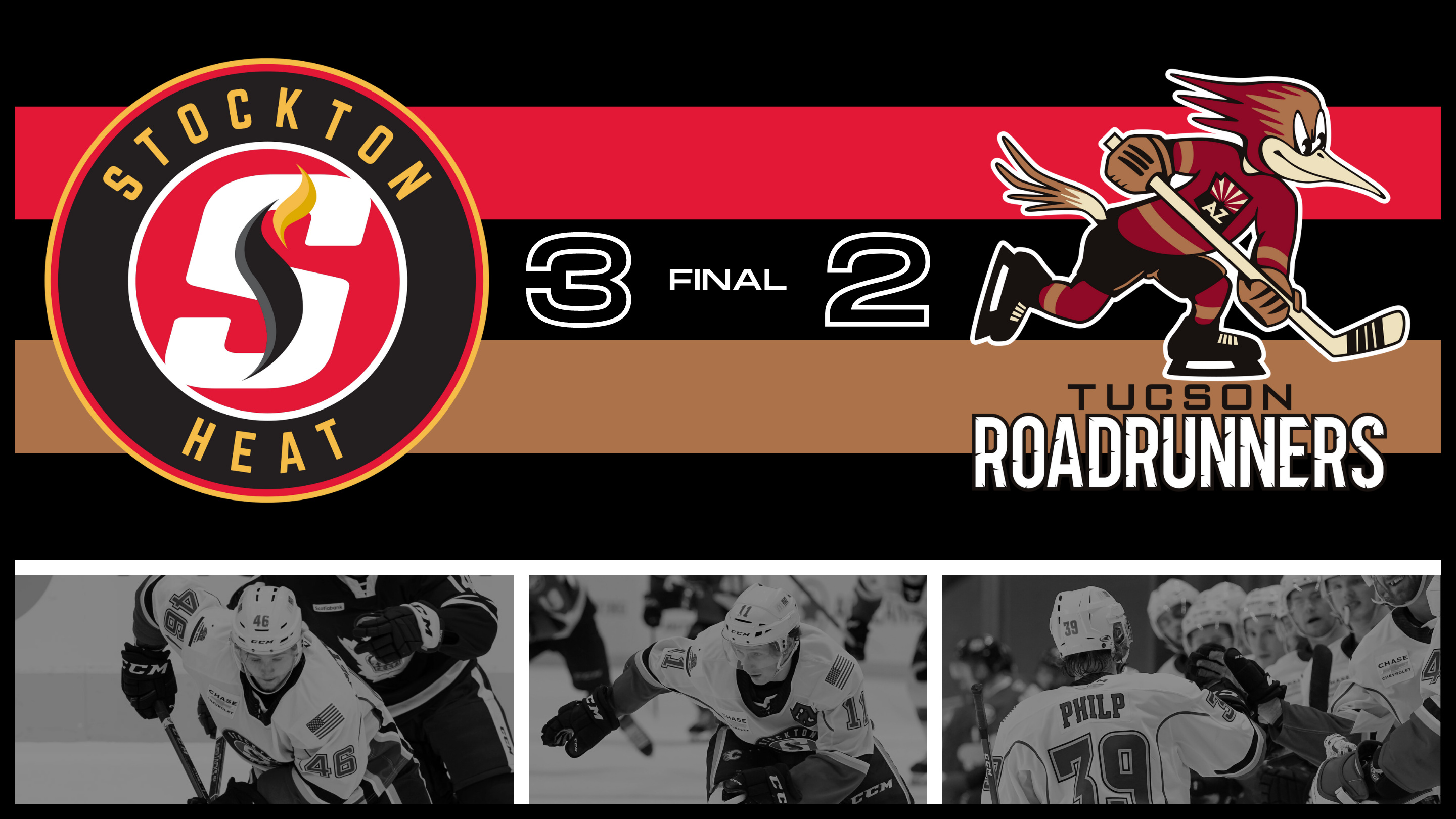 By Paige Siewert
1 year ago
It was a big night for the new guys as Jakob Pelletier and Walker Duehr picked up their first professional goals in the Stockton Heat’s 3-2 win over the Tucson Roadrunners. Dustin Wolf played another solid game, stopping 32 of 34 shots. This game gave Stockton their first win of the season and a split on their opening weekend series at home.

A night of milestones

As if a good team win was not enough, there were also some individual accomplishments to celebrate in their second game of the 2021-22 season.

It was about time the Heat lit the lamp. While a scoreless game through regulation was fun to watch on Friday night, things were getting a little dry on the scoring side of things. The Heat didn’t take too long to address their scoring drought with a power-play goal late in the first period. A goal originally credited to Adam Ruzicka but eventually given to Justin Kirkland later in the game, as his redirect was surfaced under further review.
This power play shift? Absolutely stunning. Well deserving of the goal they got. The Heat held the zone and generated handfuls of chances for pretty much every player on the unit. This could end up being a secret weapon for the Heat if they keep that up.
However, the Heat penalty kill was not perfect either. The Roadrunners were able to get another one back before the end of the first period with a goal from Hudson Fasching. Martin Pospisil was sitting in the penalty box for tripping at this point.
The second period is where the Heat did the bulk of their damage. Walker Duehr wasted no time at all out of the gate and scored the second of the night a mere 14 seconds into the second period. Luke Philp opted to pass this one up to him as opposed to taking the awkward shot himself, and it paid off.
The Pelletier – Ruzicka – Phillips line rode the momentum of the Duehr goal and thought they’d do some more damage themselves. A line combination with the potential to be very deadly for Stockton this year. Jakob Pelletier picked up his first professional goal by tucking away a pass from Ruzicka with a backhand shot. You can see on his face how that goal felt. The first pro goal never gets old.
That goal also gave Ruzicka his first multi-point game of the season and ended up holding the Heat for the rest of the game. The Roadrunners were only able to get one more tally on the night with a goal by Cam Dineen 5:28 into the third period. Jakob Pelletier was given the first star of the night for his game-winning goal.

The Heat are running with quite a few extra bodies down in Stockton, so Saturday night was an opportunity to get a few new faces in the lineup. Eetu Tuulola and Mark Simpson got their season debuts but were not super noticeable. Neither registered any shots on goal, but Simpson had some looks. They replaced Dmitry Zavgorodniy and Ryan Olsen in the lineup.

The Heat are done for the weekend but will be back in action again next Friday for a road game against the San Diego Gulls. Puck drop is at 8 p.m. MT. They will also face the Bakersfield Condors the following night at the same time. Stockton will not play a weeknight game until Nov. 3.
After a solid two nights of hockey, the Heat walk away with a .500 record and three out of a possible four points.
Uncategorized
Recent articles from Paige Siewert