Heat Post-Game: Another win closer to the division title 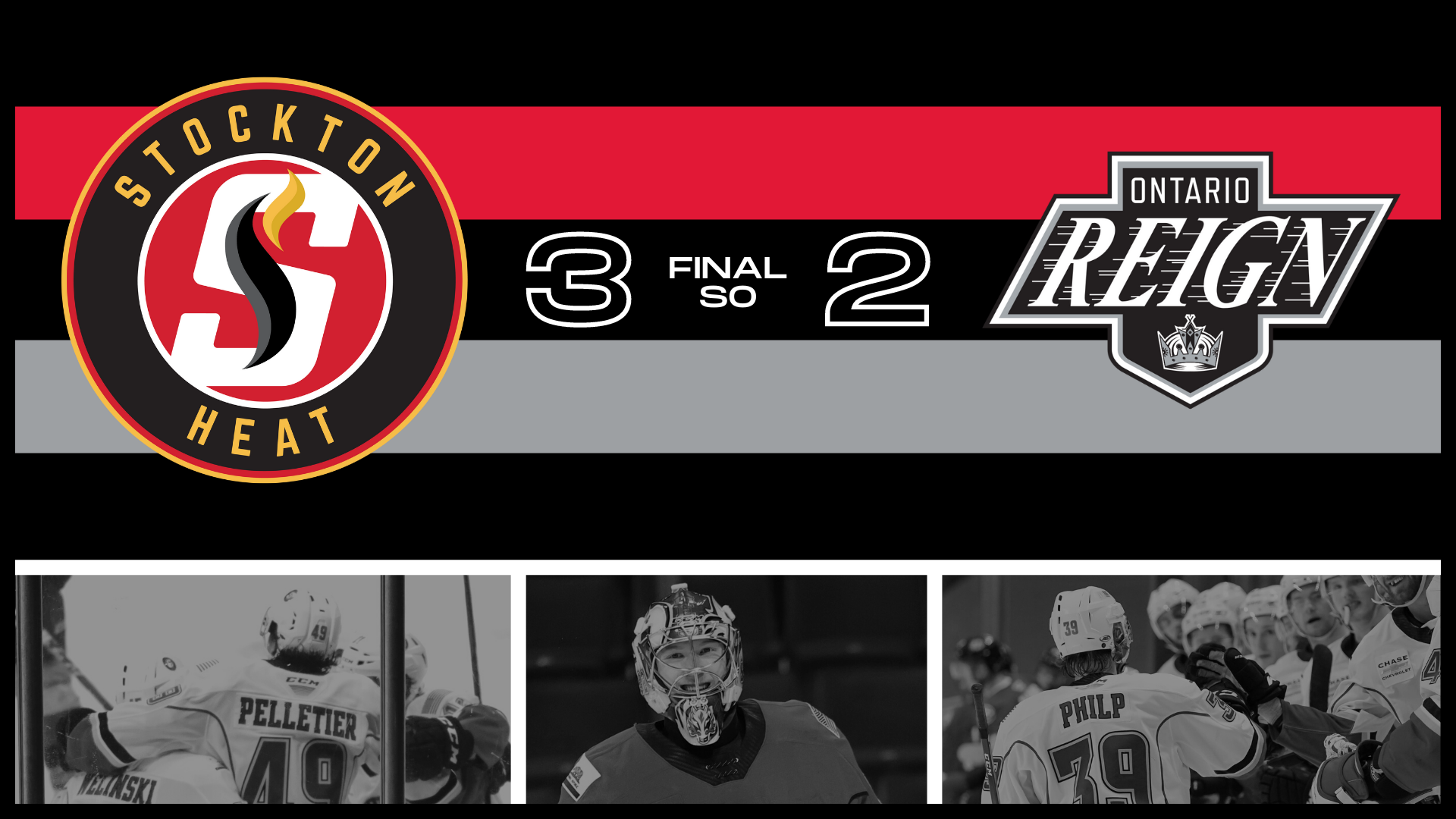 By Paige Siewert
9 months ago
The Stockton Heat kicked off their weekend series against the Reign on Friday night with a game that brought a lot of bonus play. Every goal was followed up with an opposing tally and nothing could be decided in overtime. The Heat showed themselves to be the better team on this night by winning 3-2 in just two shootout rounds.

Pencil it in the record book

It was another historic night for Stockton’s alternate captain Matthew Phillips. With his opening goal 7:12 into the first period, Phillips set a new team record for goals in a single season with his 28th lamplighter of the season. I saw pencil because he is very likely to update this record again before the regular season comes to a close. Just take a look at that stunning sharp angle shot.
For how good Phillips has been this year, you’ve got to wonder what it would take to get him up to the Flames. With Adam Ruzicka already up, would Phillips be next in line? The situation would depend on which player is injured or under-performing of course as the Flames seem to be partial to the play of Glenn Gawdin and Walker Duehr, but doesn’t he deserve a shot?
As much as Heat fans love seeing him play and a lot of the team’s success is off the back of number 11 this year, what’s left to wonder is, what is missing in his game? The idea of being, “too small,” for the NHL is phasing itself out and one NHL game in his whole career is not doing him a lot of justice based on the skills he has.
Phillips deserves to be on a winning team and deserves recognition for his effort. He’s a long-time Heat player and a meaningful season with them is well deserved but where does he go from here?

Phillips was not the only one to score in the first period. Unfortunately for the Heat, their opponents were able to get one back in the last 45 seconds of the period. They were on a four on four as Luke Philp was called for tripping and the Reign were only halfway through a penalty of their own.
The Heat lost the draw and within seconds, a slap shot was in the back of the net. Tough break with them getting tied up on the face-off and leaving quite a gap for a quality scoring chance.
In the second, the Heat got their lead back with a redirect in front of the net from Emilio Pettersen. Kevin Gravel and Nick DeSimone picked up assists.
The Heat scored again in the third but it was waved off due to a high stick. As a result, their opponents kept in the game. The Reign were getting down to the wire when they scored once more in the last three and a half minutes of regulation. Once again on a four on four. They didn’t score a single even-strength goal all night and just took advantage of the holes in positioning with the Heat down a man.
Thankfully for the Heat, the Reign did not have the same luck with three on three. They played through overtime with only seven shots between the two teams. Ontario held a slight 4-3 edge. No decisions were made in OT so this game headed to a shootout.
The shootout lineup only made it to two as both Justin Kirkland and Phillips scored. Dustin Wolf stopped both Reign shooters and saved themselves a third round. The final score was 3-2 with the Heat outshooting the Reign 38-26.

Dustin Wolf was once again recognized as the first star in this game. He also extended his success in shootouts to a perfect three in a row. He stopped 24 of 26 Ontario shots this game and had a new look for a little extra pizzazz. Wolf took the ice with a new mask and it is mean looking.
There’s also a nice touch of a wolf howling along the side. Do you think he’s already testing out and breaking in some playoff gear?

The Heat have a new magic number to clinch the top spot in the Pacific Division and playoffs will be here a lot sooner than you may think. The Heat only have nine games remaining in the season that will all be played in the month of April. It is in their best interest to stay at the top of the division as they would get a first-round bye in the playoffs and play their first series against the lowest-seeded winner of the first round. Why make things harder than they need to be?
After this win, the Heat’s magic number for the division is down to nine points.

Stockton will get another shot at the Reign with a Sunday afternoon match-up. Don’t be surprised if you see Wolf back in net for that one too. Ontario is just behind the Heat in the division and any space they can create between themselves and the teams below them, only benefits them in the long run. They need to put their best lineup forward and Dustin Wolf is by no surprise, the guy they need in the net.
The regular season rivalry between the Heat and the Reign will conclude on Sunday with the last game of their season series. Puck drop will be at 4:00 p.m. MT.