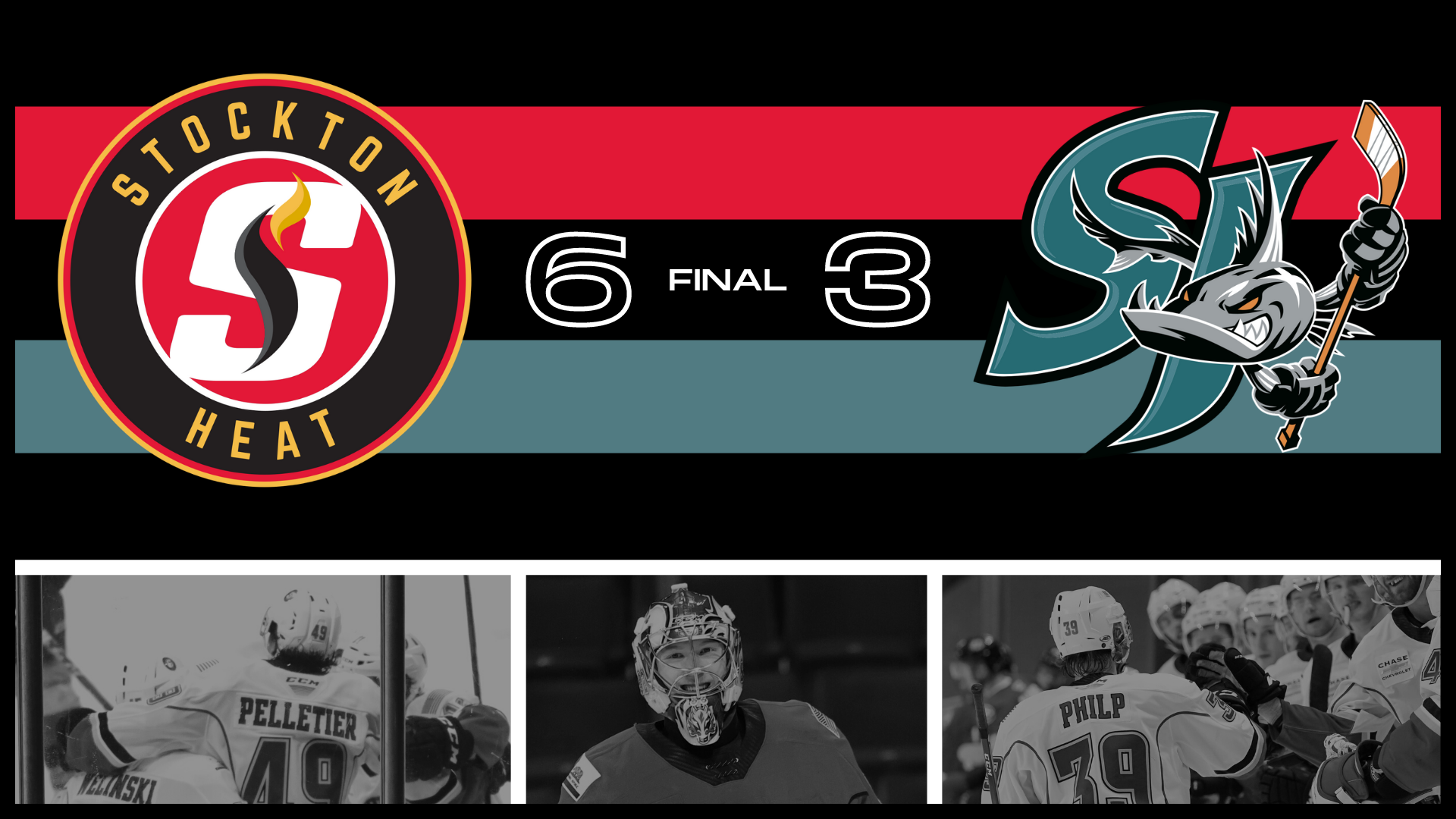 By Paige Siewert
10 months ago
The Stockton Heat got one more shot at the San Jose Barracuda on Saturday night before their week of hockey came to an end. Despite falling behind in the score once again, the Heat pulled off another win on back to back nights to sweep the Barracuda and put them two points closer to clinching a playoff spot.

Both weekend games involving the Heat and the Barracuda started with San Jose starting with a lead, pulling ahead by two goals, then eventually losing to the Heat when they came from behind to win it. On Saturday, the Barracuda scored a power play goal to start the scoring at 6:47 into the first period. Then, Eetu Tuulola scored the tying goal later in the period off a partial break.
Stockton’s shot efforts through the first heavily outweighed San Jose’s as they ended the first frame up 16-8 in shots but tied on the scoresheet. In the second, the Barracuda pulled together some scoring to earn their two-goal lead. First at 8:27, then again at 11:03 once again on the power play. By the 12 minute mark in the second, the Heat had a pair of goals they needed to make up for.
Before any more scoring took place, on-ice emotions flared up. 32 minutes of penalties were dealt to both sides including a bit of fighting action, roughing and even a kneeing call against Stockton. The Heat’s comeback effort came after these extra-curriculars as Emilio Pettersen scored an unassisted goal off a bit of an unbalanced shot at 18:08.
By the second intermission, the Heat were close enough in this game to rally some scoring in the last 20 minutes of regulation. It didn’t take long for the tying goal to come either. Alex Gallant scored just under three minutes into the third when he tucked away a rebound.
Luke Philp also wanted in on the scoring action and scored 11 seconds later to earn the Heat their first lead of the night. Just past the midway mark of the third, Heat captain Byron Froese took the opportunity on the power play to score an insurance goal.
At 13:55 in the third, the last goal of the night was scored on a penalty shot Emilio Pettersen took. Final score finished up with the Heat winning 6-3, Dustin Wolf stopping 30 of 33 shots, and the Heat putting up 40 shots on the board.
As far as special teams went, the Barracuda went one for three on the power play and the Heat went two for four. These two will see each other once again on Mar. 22 for a make-up game rescheduled from back in December when this Heat squad was Covid stricken.

What has become very clear in recent games is the Heat are extremely close to punching their ticket to the postseason. Stockton still sits on top of the league standings and are only five points away from clinching a playoff berth. 23 AHL teams will play in the Calder Cup race this year and if things started today, the Heat would earn a first-round bye to the Division Semifinals where they would face the lowest-seeded first-round winner in the Pacific Division.
Clinching would take a lot of pressure off the team, but it is really in their best interest to keep up the consistency to roll their standard of playing style into post-season match-ups. The Heat keep things pretty modest and humble but the way this team has been playing this year, they are a serious contender for the Calder Cup. There’s no doubt about it.

Stockton’s week has come to a close but they will not waste any time getting things started next week. They will host the Bakersfield Condors on Monday night then again on Wednesday night. Their last series about a month ago resulted in a two-game Heat sweep. They play a total of four games next week as they hit the road for the weekend to face the Colorado Eagles.
There will be plenty of Heat action to keep up with next week as the first game of the week is set to start at 7:30 p.m. MT on Monday night.