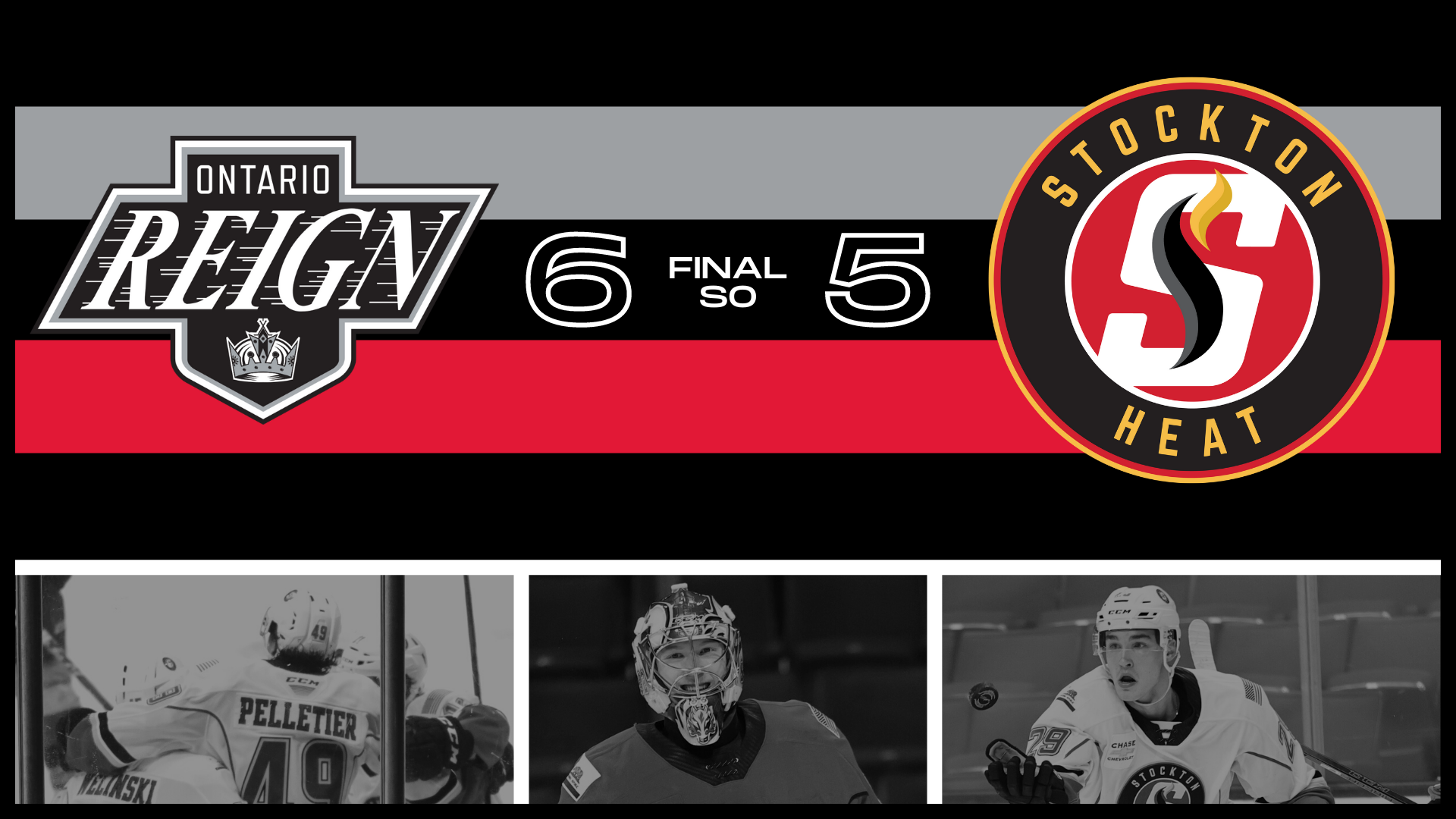 By Paige Siewert
9 months ago
The Stockton Heat wrapped up their season series against the Ontario Reign on Sunday evening. Ontario has been one of the tougher opponents Stockton has had this year with many of their games going outside of regulation and the Heat losing to them three times this season. Sunday was unfortunately, one of these losses as the Heat fell 6-5 in the shootout.

This was the second game in a row the Heat went to a shootout. It was also the same opponent. The Heat won their Friday night match-up in two rounds but the Reign got their revenge in this one. Scoring occurred in every single period but it was the back half of the game where most of the action took place.
Walker Duehr scored first with a well-placed wrist shot. Colton Poolman got the lone assist.
That concluded first period scoring and the Heat stretched their lead even further with the next two goals coming off the sticks of Stockton skaters. Nick DeSimone was the next to score 6:58 into the second period.
2:03 later, Justin Kirkland scored his 19th goal of the season assisted by Martin Pospisil and Luke Philp. The Heat got some serious zone pressure and Kirkland was able to bury a rebound off his backhand.
The Reign started their scoring later in the second then again in the first half of the third period. By the time the third was just over half over, the Reign had already crawled all the way back and tied the game up at three.
Connor Zary made an effort to regain some control with a power play goal 13:23 into the third.
The lead was cut short 13 seconds later with a goal from the Reign. Time was running out and Justin Kirkland was the next shooter to try and end this game in regulation. He scored 16:39 into the third and the Heat were unable to contain their lead. Ontario scored just under a minute later and the score was up to five a side.
Stockton got a later power play opportunity but were unable to capitalize. The clock ran out with no winner decided and they went to overtime. The Heat had a slight 4-3 edge in shots through the five minutes of overtime and still did not find the back of the net.
In the shootout, Justin Kirkland continued to show why he is the go-to guy by scoring as the Heat’s first shooter. Matthew Phillips shot next and didn’t score but his opponent did. The third Heat shooter was Glenn Gawdin and he was also unsuccessful. The last Reign shooter scored and that wrapped up this game. Ontario won 6-5 but the Heat were able to secure a point.
Shots finished up 40-34 in favour of the Heat. Dustin Wolf was between the pipes once again.

A shootout win was enough to move a little closer to clinching the top spot in the Pacific Division. They are now down to just eight points to go with eight games left in the season. They still sit comfortably on top of the division and still hold the top spot in the league.

It will be all Henderson next week with three games on the schedule against the Silver Knights. All on the road. They will kick things off on Wednesday night then play the next two on Friday and Saturday night. Henderson has been a tough opponent for the Heat as their season record going into this series is 2-3-1-0. These next three games will give them an opportunity to earn back the edge in the season series and finish off strong.
The first game of the series will get started at 5:00 p.m. MT.