HGD 12: Looking to get back on track against Laval (6pm MT, AHL TV) 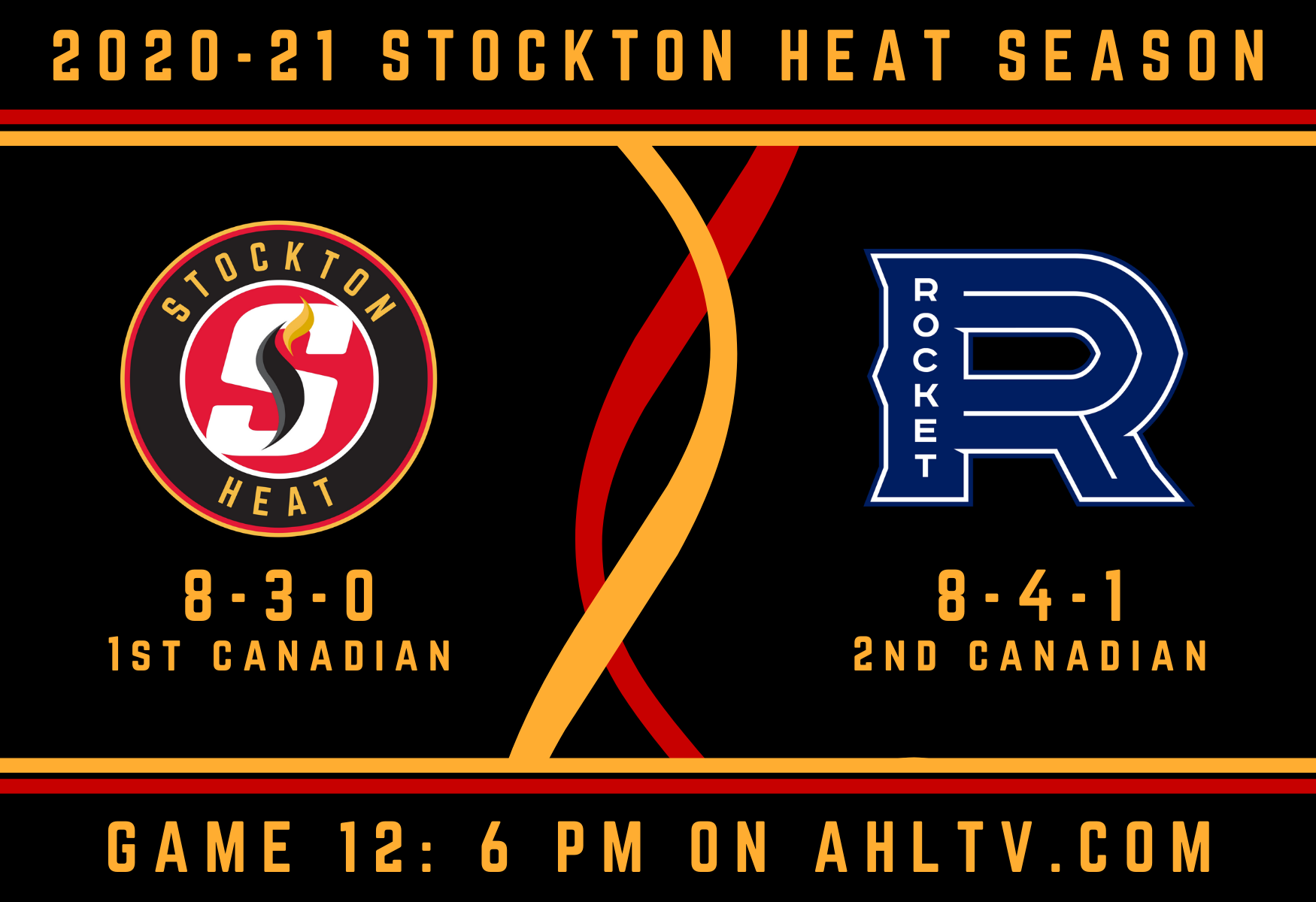 By Mike Gould
1 year ago
On Thursday, the Stockton Heat will be looking to get back into the win column after their eight-game winning streak was snapped by the Manitoba Moose on Mar. 13. The Laval Rocket will be their opponents, having arrived in Calgary for a four-game series against the Heat.
These two Canadian Division heavyweights have yet to meet this season—or ever, for that matter. The AHL’s previous divisional alignment prevented the Heat and Rocket from ever playing against each other.
While this season’s arrangement is expected to be temporary, it will, nevertheless, allow these two competitive clubs to square off for divisional supremacy. Stockton currently leads the ranks—and is fourth in the league—with an 8-3-0 record; at 8-4-1, Laval actually has one more point than the Heat but has played two more games.
Stockton has, to this point, feasted on its opponents with a balanced and potent offensive attack. Laval’s lineup lacks the same high-end punch that Stockton has gotten from Matthew Phillips and Adam Ruzicka but it’s just as deep, if not deeper.
The Heat have found success in 2020-21 with major contributions from legitimate young prospects. Phillips (22), Ruzicka (21), Martin Pospisil (20), Emilio Pettersen (20), Connor Zary (19), and Glenn Gawdin (23) have all driven the bus at times for this Stockton team, with 24-year-old Justin Kirkland and 25-year-old Luke Philp collectively acting as the age ceiling for the top-nine.
Conversely, seasoned AHL veterans have done a lot of the scoring for Laval. Joseph Blandisi and Jordan Weal have bounced around between various NHL organizations for years. Yannick Veilleux, Alex Belzile, Brandon Baddock, and leading scorer Lukas Vejdemo are all over 25.
Laval is not without any high-potential prospects. 2017 first round pick Ryan Poehling just turned 22 in January and is still trying to recapture the magic of his three-goal NHL debut. 2018 second-rounder Jesse Ylönen made the jump over from the Liiga to the AHL this year and has started well on Weal’s right wing, posting nine points in 13 games.
Then, of course, there’s Jan Mysak, who Montreal selected 48th overall in the 2020 Draft. Mysak has skated in a depth role for the Rocket to this point but he has plenty of offensive potential, having preceded this season with 25 points in 22 games for the OHL’s Hamilton Bulldogs in 2019-20. He was a healthy scratch in Laval’s last game but has two goals in six contests this year.
Boasting Cale Fleury, Otto Leskinen, Josh Brook, former Heat rearguard Corey Schueneman, and NHL veteran Gustav Olofsson, Laval’s defensive corps ranks among the league’s best and has surrendered just 33 goals in 13 games. Stockton also possesses some excellent defensemen and has allowed 32 goals in two fewer games. If the Heat want to emerge from Thursday’s clash with a victory, they’ll need to creatively and relentlessly attack to solve the Rocket defense.
The Flames recalled goaltender Artyom Zagidulin and Heat captain Alex Petrovic on Wednesday, sending down Louis Domingue and Michael Stone to replace them. Domingue and Stone could both make their 2020-21 season debuts (at any level of professional hockey) on Thursday.
Cayden Primeau has started eight of Laval’s 13 games this season and seems like a safe bet to get the nod on Thursday. The 23-year-old former Northeastern University star has a 5-3-0 record this year with an .896 save percentage.

Stockton — Michael Stone. The 30-year-old blueliner probably isn’t an NHL-calibre player at this point in his career. He’s played 472 regular season games in the big leagues, including 148 with Calgary over the past four seasons, but he’s lost much of his mobility and has seen his ice time decrease consistently during his tenure with the Flames. He’s only played three AHL contests since 2012-13, joining the Heat for a three-game stint during his recovery from a blood clot issue in 2018-19. The AHL is a slower league where veteran defensemen can dominate; Alex Petrovic has thrived in his role for the Heat this season. Stone will likely slot right into Petrovic’s old spot but it remains to be seen whether he can replicate Petrovic’s proficiency in all situations.
Laval — Corey Schueneman. The long-time Western Michigan standout made his professional debut with the Heat, spending parts of two seasons in Stockton between 2018-19 and 2019-20. He scored 21 points in 44 games for the club last year before departing to sign an AHL deal with Laval last July. He’s been logging big minutes on the top Rocket pairing this season but, with respect to the general uselessness of the stat, is one of only four players on the roster with a minus rating this year (his minus-six is well below Yannick Veilleux’s minus-two figure, second-worst on the team). Schueneman is an average-sized defenseman (6′, 200 pounds) with good skating and play-reading ability.

This game will be broadcast on AHLTV.com (subscription required), with the opening puck-drop set for 1:00 p.m. MT. Live game updates can be found on Twitter at @miketgould or online at TheAHL.com.
Uncategorized
Recent articles from Mike Gould