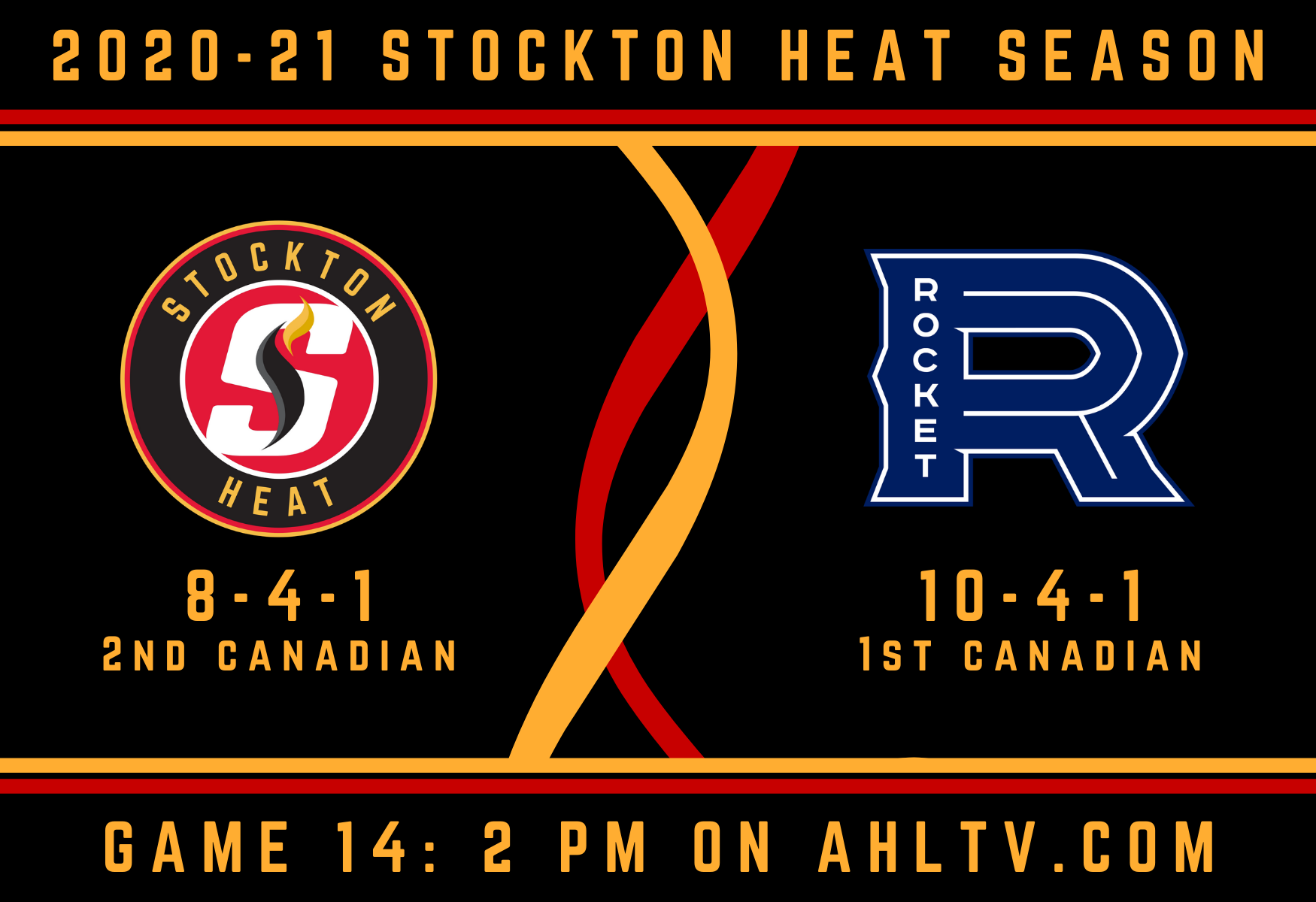 By Mike Gould
1 year ago
When I was a kid, my friends and I would sometimes play a game in my living room called “the floor is lava,” where we would jump around on various pieces of furniture trying to avoid getting “burned” by the hardwood.
Things look a little different at this point in the 2020-21 AHL season. At 4-8-0, the Belleville Senators represent the floor of the Canadian Division. From the perspective of the second-place Stockton Heat, the ceiling is Laval—and they want to reach it.
After defeating Stockton in two consecutive games, the Laval Rocket now own a 10-4-1 record and have four more points than the 8-4-1 Heat. The two teams are set to enter the second half of a miniature back-to-back of a four-game series on Sunday afternoon at the Scotiabank Saddledome, with the home side still searching for its first-ever win against the Rocket.
Sunday’s clash will begin at 2:00 p.m., exactly 24 hours after the start of these two teams’ most recent meeting. On Saturday, the Heat fell by a 4-3 score despite tallying twice in the final period of play. With the victory, the Rocket shot past Stockton in the standings; if the Heat win in regulation on Sunday, they’ll reclaim their spot atop the Canadian Division.
Byron Froese, Michael Stone, and Luke Philp scored for Stockton on Saturday. Goaltender Louis Domingue allowed four goals on 21 shots and is still searching for his first win of the year. His backup, Garret Sparks, is likely to get the nod on Sunday: Sparks is 4-1-0 in six games this season with a .923 save percentage.
Rafael Harvey-Pinard, Joel Teasdale, Joseph Blandisi, and Jesse Ylönen added goals for Laval in the Saturday matinee. Cayden Primeau, who won the first Laval/Stockton game of the year on Thursday, was not in the lineup in Laval’s most recent game and it remains to be seen whether he’ll be available for the team to use on Sunday.

Stockton — Dmitry Zavgorodniy. Four Stockton skaters are still searching for their first points of this season. AHL rookies Kris Bennett, Koletrane Wilson, and Rory Kerins are three of them.
Then there’s Zavgorodniy, who has played over twice as many games as those three players have, combined. Zavgorodniy has played in each of Stockton’s first 13 games this season but has yet to record his first professional point.
The 20-year-old right-shot winger was drafted by Calgary in the seventh round of the 2018 Draft and is coming off an illustrious junior career with the Rimouski Océanic, most recently scoring 29 goals and 67 points in 40 games last season.
Zavgorodniy can take comfort in knowing one of the Heat’s most illustrious players, Matthew Phillips, had to wait until the ninth game of his first full professional season before he got on the board. Stockton’s Russian rookie has 14 shots on goal to his credit and is still skating in a regular spot on the team’s third line.
Laval — Jesse Ylönen. Yes, it’s Ylönen—it says so on the back of his jersey! The American-born Finnish winger is one of a select handful of professional hockey players playing in this continent to have a diacritical mark sewn onto the back of his sweater (Ottawa’s Tim Stützle, the Rangers’ Alexis Lafrenière, and Vancouver’s Nils Höglander round out the group).
My rule is: if the player uses it, I use it. This applies to all pronunciation and spellings. Hopefully, more players will soon have the option of spelling their names to their liking on their uniforms.
The Canadiens selected Ylönen in the second round of the 2018 Draft and he’s already looking like a shrewd selection. This is his first season playing in North America and, at the age of 21, he already has 10 points (four goals, six assists) in his first 15 AHL games. He scored the game-winner against Stockton on Saturday.
Ylönen comes from strong NHL bloodlines: his father, Juha Ylönen, was a checking-line centre who played 341 regular-season games between 1996-97 and 2001-02 with the Phoenix Coyotes, Tampa Bay Lightning, and Ottawa Senators. Jesse was born in 1999, right in the middle of Juha’s tenure in the desert.

This game will be broadcast on AHLTV.com (subscription required), with the opening puck-drop set for 2:00 p.m. MT. Live game updates can be found on Twitter at @miketgould or online at TheAHL.com.
Uncategorized
Recent articles from Mike Gould