How the Kings became the Flames’ chief (non-Oilers) rivalry 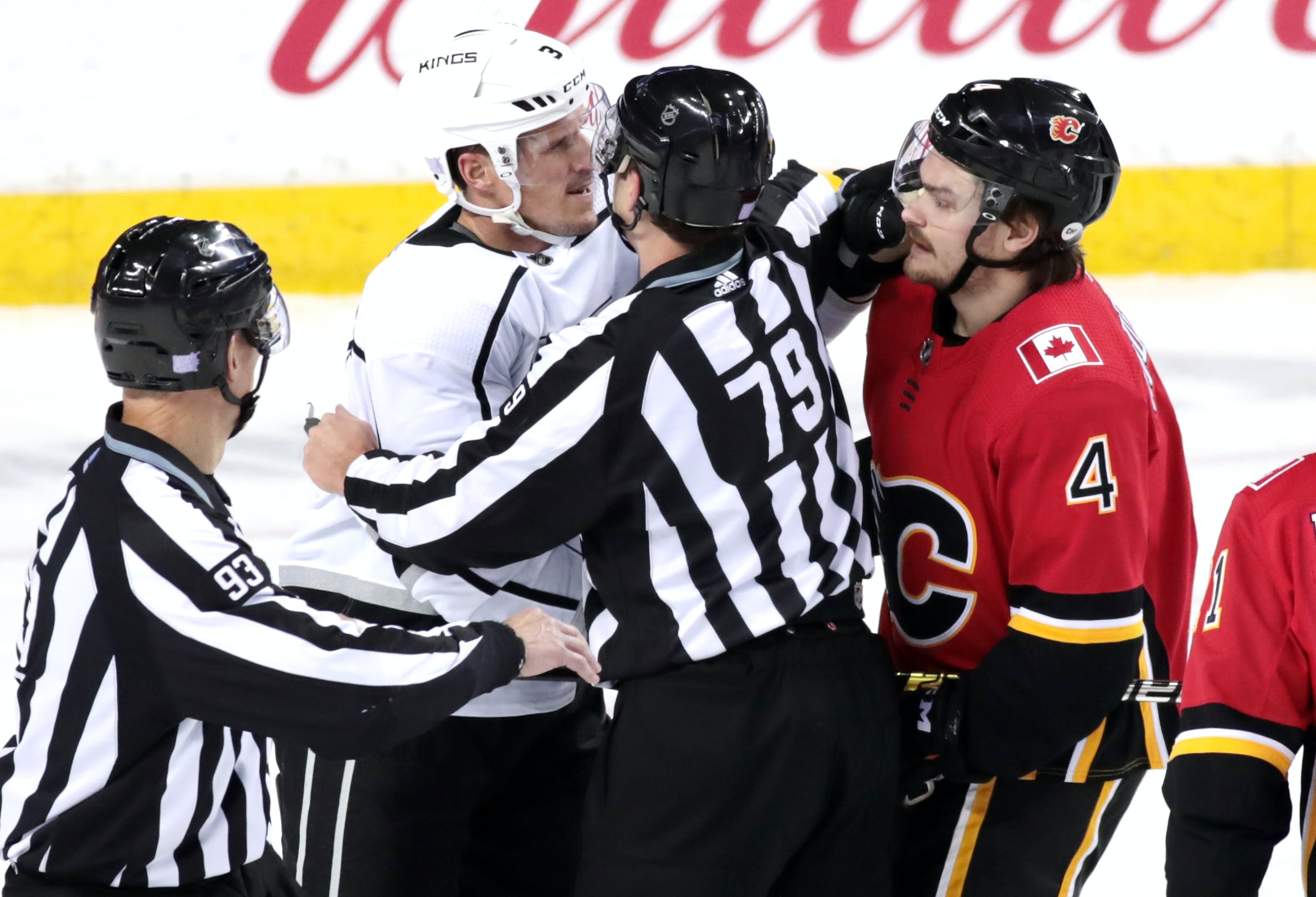 By Ryan Pike
2 months ago
Friends, the saying goes that rivalries are born in the playoffs. But in terms of formative regular season clashes, there are two teams that immediately come to mind for the Calgary Flames over the past couple of decades. One’s quite obvious: the Edmonton Oilers, the Flames’ counterpart in the Battle of Alberta.
But the other is probably the Los Angeles Kings, a team whose construction, culture and playoff success are arguably what the Flames are currently being modelled towards.
While a lot of the animosity between the Flames and Kings does date back to the on-ice antics of Matthew Tkachuk during his rookie season of 2016-17, the importance of their regular season rivalry dates back to the 2014-15 season.
With the Flames riding into Staples Center nursing a lengthy eight-game losing streak for their final game before Christmas, the Kings spotted themselves a 3-0 lead off of two power play goals and generally out-played the Flames for the first 40 minutes. But Johnny Gaudreau – who to that point had merely been a really solid offensive contributor – took over the game, scoring his first career NHL hat trick with a late goal in the second period and two late goals in the third period to force overtime. Mark Giordano scored to win the game, end the streak, and showcase the kind of grit that the Flames became known for.
That April, the Flames faced the Kings in a “win and you’re in” Game 81 showdown at the Saddledome. You could be forgiven if you had favoured the Kings in that game, given their veteran lineup and record of success in such situations. However, the Flames gutted out another gritty performance to win 3-1 and cement their first playoff berth since 2009.
Since that season, the Kings’ season series has become a sort of bellwether for the Flames’ hopes as a whole. If the Flames play the Kings well and gain a bunch of points, it’s sort of a microcosm of how they’re playing against the entire Pacific Division. If they struggle against them, they tend not to do well overall.
Rivalries are built in the playoffs. While the Flames haven’t seen the Kings in the post-season since being bounced by them in 1993, they’ve built a lot of memorable moments into their regular season meetings. Not just Gaudreau highlights or Tkachuk/Doughty hijinks, but several tight-checking, hard-hitting games featuring some really memorable exchanges from several players on both sides.
‘
Needless to say, games between the Flames and Kings have tended to mean something more in the grand scheme of the season. Add in Darryl Sutter’s connection with that club through his two Stanley Cup victories – and current Flames like Milan Lucic, Tyler Toffoli and Trevor Lewis having spent time in Los Angeles – that only serves to amp up the importance of the season series.
The Oilers are the Flames’ top rivalry. That’s undisputed, and cemented by some really contentious regular season and playoff meetings. But based on recent history, the silver medal for animosity has to go to the Kings. For a Flames team looking for traction early in the season, and after a lot of roster changeover, a battle with such a bitter rival might be just what the doctor ordered.
Editorials
Recent articles from Ryan Pike