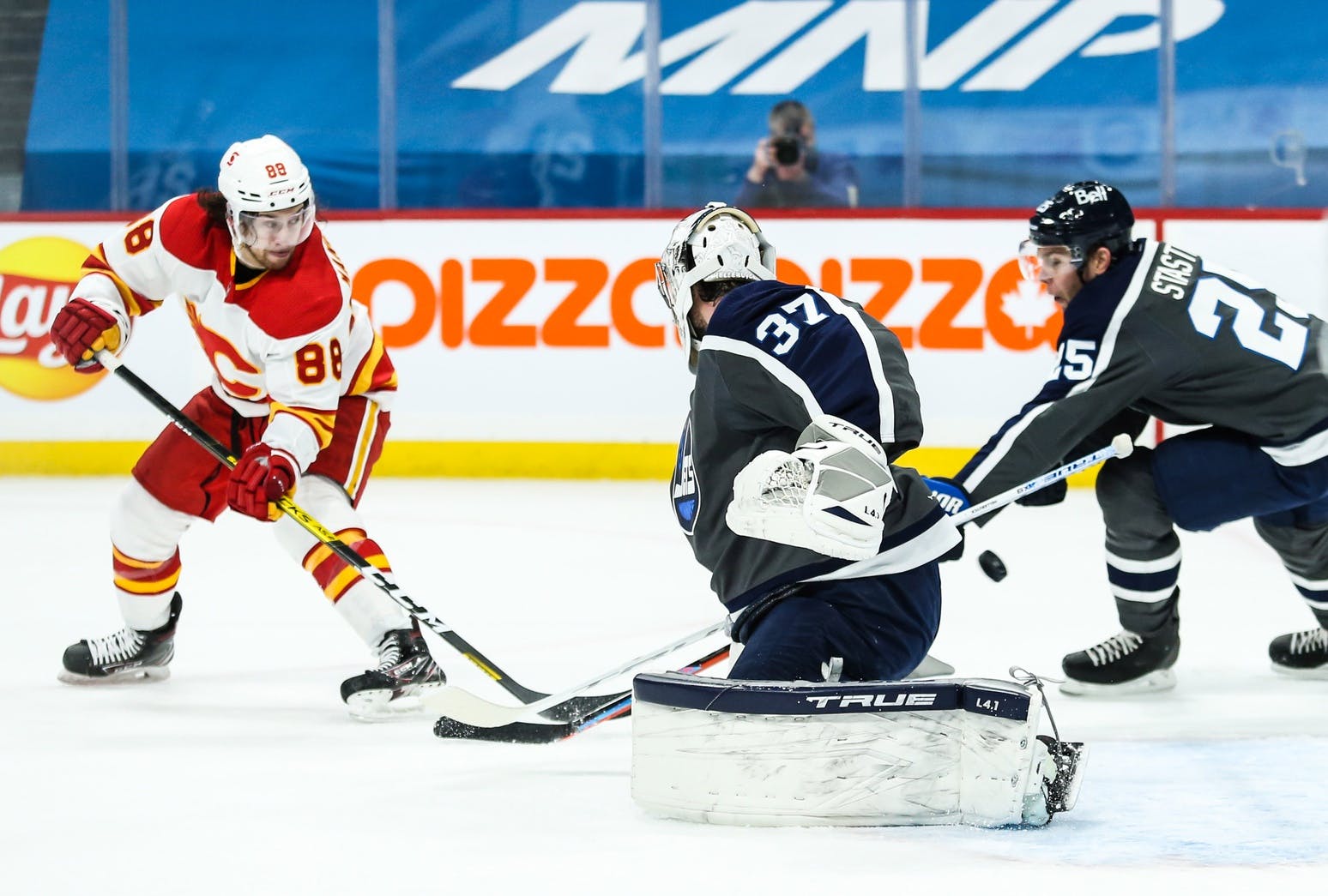 By Mike W
1 year ago
It doesn’t get much more dreary than a 4-1 loss to the Jets on a Thursday in February in Winnipeg. The Flames pulled a reverse Uno card and finally got off to nice start.. .and then blew it by falling into a drab, low event, straight up dull brand of hockey. For a second straight game they got smoked in the second period and this time it really cost them.
Great start. A dominant offensive shift by the Mikael Backlund unit was capped by a wonderful hot pass (chef’s kiss) off the stick of Juuso Valimaki which was expertly redirected into the twine by Andrew Mangiapane. A classic Backlund & Mangiapane shift leading to the game’s opening goal? Let’s go! Oh, wait there’s still over 40 minutes left to play and, for some reason, this club cannot seem to play a single game without forgetting how to play ice hockey for large stretches.
Last night, it was a dreadful second period.
(5v5 Adjusted for Score and Venue)

In a short span the Flames let the game slip through their fingers. The top unit allowed Mason Appleton to score a tap in uncontested. Ultimately the game winning goal, sniped on a breakaway by the new Flames killer Kyle Connor, was the turning point as the Jets controlled pretty much everything 5v5 from there on out cruising to victory and Mark Scheifele’s tally was the final dagger.
Despite a few close calls on the power play in the final frame the Flames weren’t even able to muster a high danger chance in the third period. 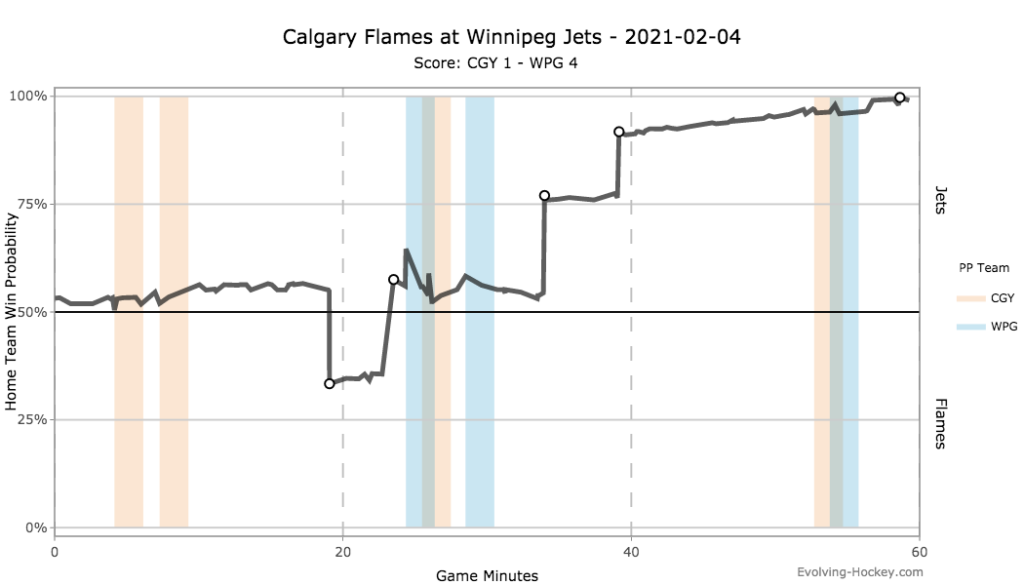 The Flames power play entered Manitoba on fire and leave it ice cold. They had their chances, specifically in the third (Andersson of the iron; Lindholm can’t beat Hellebuyck five hole in tight) but overall not nearly as dangerous as we’ve come to expect. With how well Noah Hanifin has looked with the puck on his stick this season maybe the man advantage could use some 55 on the point.

Some issues up front

I have to be honest, I don’t mind Dominik Simon’s game at all but I don’t see what he brings to the top offensive unit of the Flames. It was also another rough night for the Tkachuk, Lindholm and Dube trio as all three finished well below water 5v5 in terms of quality shot share. Lindholm and Tkachuk were so strong 5v5 in the early going it’s strange to see them struggle to drive play. They aren’t creating much and they aren’t defending well right now.
With the strong showing from Backlund and Mangiapane and the apparent need for a shakeup, it might be time to go back to old faithful and reunite the Purple Gatorade trio and the 3M line. I’m sure Ward and the staff are reticent to pull Lindholm from center but something needs to change as the team isn’t seeing results right now. The Tkachuk-Backlund-Mangiapane unit has rarely, if ever, failed you in the past. I’d give it a go against the Oilers. Some adjustments need to be made up front (and no, Joakim Nordstrom on the top line is not one of them).

Listen, the guy busts his butt every shift and gives it his all but his struggles continued again last night. Gio was sporting a 22.74 xGF% and 40.97 CF% with a team worst expected goals against rate. 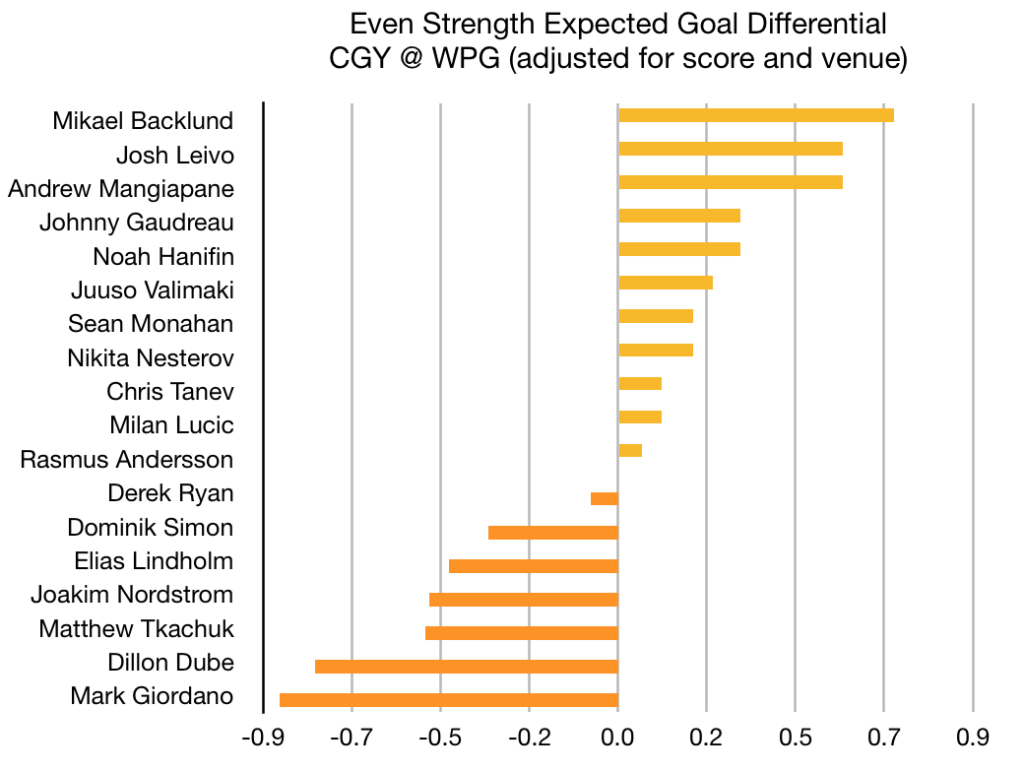 (data from Evolving Hockey)
With how well Hanifin and Tanev are playing it’s not like Gio has to Norris level but he cannot continue to get cratered in his own zone every night if this team is going to have any modicum of success this year.

Everyone’s favourite utilitarian got blasted in the hand with a slap shot and did not return. There was no update from the club post game. Hopefully it’s not long term because I’m not sure I like the prospect of a Ryan-less Lucic and Nordstrom line.

Did we notice Sam Bennett’s absence? It’s all speculation, obviously, but I have a hard time imagining this was strictly a roster move. I’m betting we’ll know by Saturday but the immediate impact certainly wasn’t felt. However, if we don’t see Bennett in Flames threads for a final BoA it’s going to be huge bummer. Say what you want about Sam, he always came to play against Edmonton.

GREAT: Andrew Mangiapane. Eat Bread was a workhorse last night. He was winning battles, retrieving pucks, and making it happen. A goal 84.65 xGF% at even strength highlight a strong performance.
JUST RIGHT: Juuso Valimaki. Move over, Kristian Huselius, there’s a new Juice in town. Valimaki is more dynamic and confident with each passing game. Another sick feed for a tap in goal was the highlight but Valimaki was impactful in all three zones against the Jets. Two shots, four shot attempts, and a beautiful primary assist.
NOT SO GREAT: Matthew Tkachuk. 19 seemed out of sync last night. Passes weren’t connecting, timing wasn’t there. Getting buried in the quality scoring chance share doesn’t help either as he got labelled with a 23.27xGF%.
Coach Ward says the team needs to better and not stay bitter. Let’s hope we don’t have any Costanzas in that dressing room.
Stats from Natural Stat Trick and Evolving Hockey
Uncategorized
Recent articles from Mike W