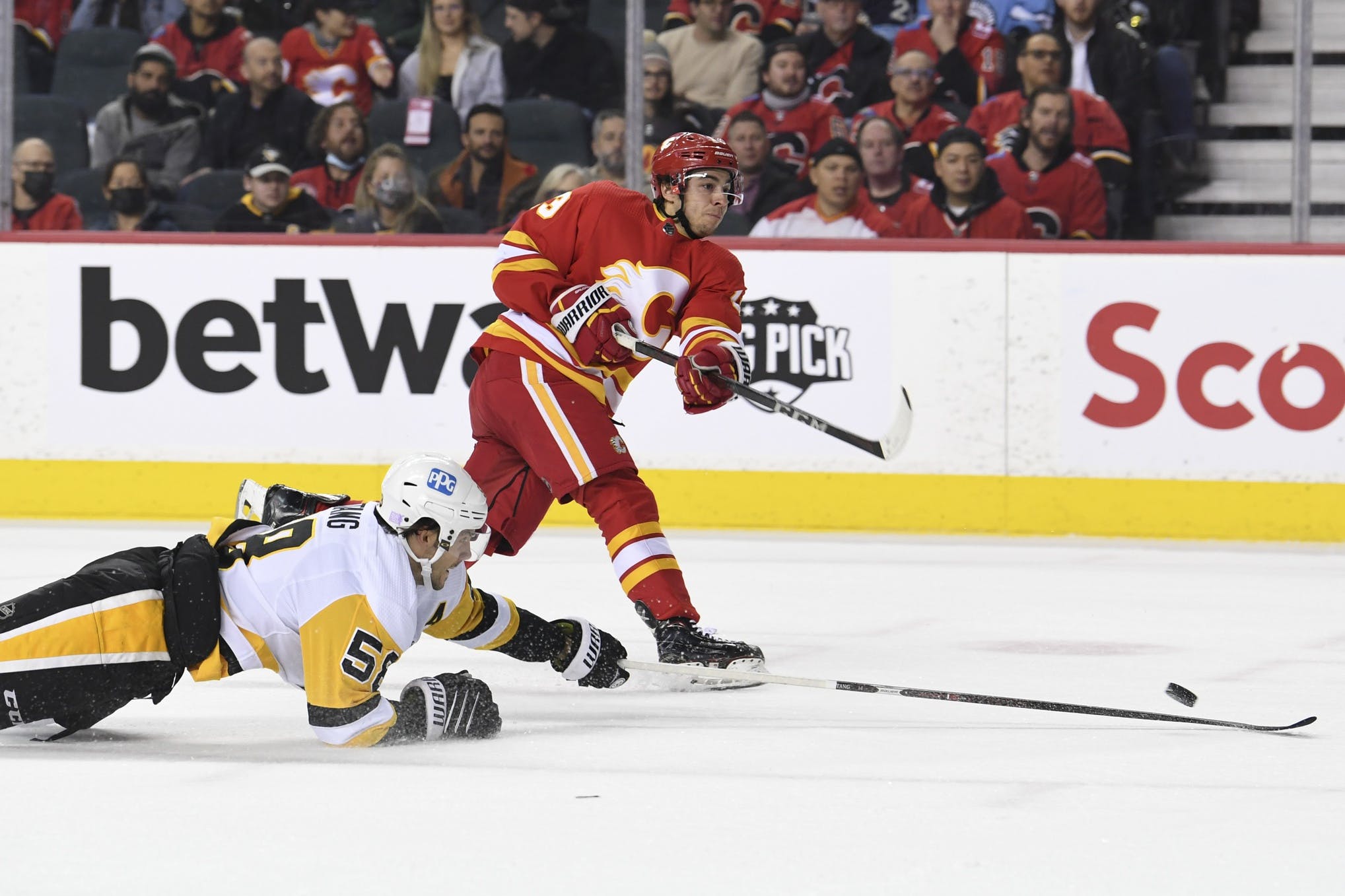 By Ryan Pike
9 months ago
The single most frequent question we’ve been posed by Calgary Flames fans, well-wishers, onlookers, and random people we bump into in regular life is “Hey, what’s going to happen with Johnny Gaudreau?”
Gaudreau is a pending unrestricted free agent in July after over a decade with the Flames organization. To get a sense of what he might do as his current contract draws to a close, let’s take a look at how he’s handled himself through his playing career at key junctures.

There are two things that are true about Gaudreau as a youth. He was always the smallest player on his team, and he was always the best player on his team. A product of Carney’s Point, New Jersey, just across the Delaware River (and state line) from Philadelphia, Gaudreau was a star pupil in area minor hockey growing up but dazzled coaches and scouts wondered how he would do at higher levels.
Gaudreau’s first big test came when he headed west to Iowa as a 17-year-old in 2010-11 to play with the United States Hockey League’s Dubuque Fighting Saints. Listed at 5’6″ and 137 pounds by Central Scouting in his draft year, Gaudreau emerged as one of the most challenging players to slot in the class. On one hand, the kid was legit: he was fourth in USHL scoring overall with 72 points in 60 games – 19-year-old Blake Coleman led the league with 92 points – and he helped lead Dubuque to the USHL’s playoff crown. On the other hand, Gaudreau was small (listed by Central Scouting at 5’6″ and 137 pounds) and the USHL wasn’t quite the hockey factory it is today back then so it was hard to predict how Gaudreau would translate.
Several teams had interest in Gaudreau, who ended up being ranked 193rd among North American skaters by Central Scouting. The Flames were one of the teams who really liked the diminutive forward, and took great pains to avoid tipping their hand.

To keep their degree of admiration hidden, they didn’t approach the player — not even once — leading up to the 2011 National Hockey League draft. And they took secrecy one step further by not talking to the boy’s junior coach, either.
Why? Because they knew that Peter Chiarelli, general manager of the Boston Bruins, had an ownership stake in the USHL’s Dubuque Fighting Saints and, should they pick the brain of skipper Jim Montgomery, word of their interest could trickle back to Beantown.

The 2011 NHL Draft was Jay Feaster’s first as general manager, as well as the first for John Weisbrod as assistant general manager overseeing scouting. The strategy provided to head scout Tod Button was for the Flames to “work their list”: to rank all available players via the team’s specific criteria of what they valued, and then simply select the best player available.
Button convinced his bosses to let him keep two players off the list, and let him decide when to draft those players if they were available: Gaudreau and Nikita Kucherov.
The Flames drafted Gaudreau in the fourth round of the 2011 draft at 104th overall. By the time Gaudreau’s name was called, every NHL team had made between two and seven picks – except Washington, who hadn’t made a pick yet. He was the fourth player selected by the Flames in that draft, following Sven Baertschi, Markus Granlund and Tyler Wotherspoon.

Originally committed to Northeastern University, Gaudreau was released from his letter of intent when head coach Greg Cronin took a job with the Toronto Maple Leafs the week before the NHL Draft. Gaudreau ended up committing to Boston College in early August, swayed by appeals from legendary college coach Jerry York and BC’s history of developing smaller forwards into NHLers, such as Nathan Gerbe and Cam Atkinson.
Gaudreau spent three years with Boston College and took about a month to figure out the ins and outs of the college game. He won a national championship as a freshman and found chemistry with Bill Arnold and Kevin Hayes. He posted 51 points in his sophomore year, won a gold medal in a star turn at the World Juniors, and as a Hobey Baker finalist. He came back to college for one more season as a junior to play a season with his brother, won the Hobey Baker, and then played his first game for the Flames three days after finishing his college career.
Prior to his first college season, the skeptics pondered if Gaudreau would be a prospect worth signing. After his first college season, the skeptics seemed worried that Gaudreau would take advantage of the “college loophole” and become a free agent after four seasons of college. For his part, Gaudreau frequently spoke with media types about how excited he was that the Flames drafted him and had faith him him, and that he was excited to join the Flames when he was done what he wanted to do in college.
The Flames took Gaudreau at his word. Their faith was rewarded when he signed, and even moreso once he found his swagger in his rookie season.

The five worst games I’ve ever seen Gaudreau play were the first five games he played in the 2014-15 season. He wasn’t even all that bad, but he looked out of place, out of sync, and not really sure what he was supposed to be doing from shift-to-shift.
After posting zero points in five games, he was healthy scratched by head coach Bob Hartley. There was chatter about potentially sending him to the AHL for a spell. But Hartley parked him in the press box for a road game against Columbus and simply told him to watch where the open spaces were on the ice. Gaudreau came back in the following game and had two points in a 4-1 win over Winnipeg.
Since then, he’s been scoring pretty consistently at close to a point-per-game pace.
After two seasons, Gaudreau became a 10.2(c) restricted free agent – he had only played two seasons, so he wasn’t eligible to receive offer sheets. Because Gaudreau was a bit of a unicorn and there were no clear comparable players, the negotiation dragged onto into training camp. With agent Lewis Gross digging in his heels, on the day prior to the season opening Gaudreau opted to take the deal that was on the table – a six year deal paying $6.75 million per season. Gaudreau just wanted to play hockey and didn’t want to miss games.
Since signing that new deal, Gaudreau has been the Flames’ top offensive weapon and arguably their best all-around player. He’s 11th in the entire NHL in points (8th in even strength points). He has 82 more points than the next-nearest Flame, Matthew Tkachuk. When you adjust his scoring across eras, Gaudreau is the fifth-best offensive Flame of all-time – behind Jarome Iginla, Al MacInnis, Theo Fleury and Joe Nieuwendyk – and he still has (at least) half a season to go.

So here’s what we think we know about Gaudreau:
On the last piece: if you look at the underlying numbers from Evolving Hockey, Gaudreau has been consistently well above replacement level for his entire pro career. If you throw out the cursed 2019-20 season where no Flames had good seasons, Gaudreau has been consistently worth between two and three and a half wins per season.
He’s consistent, he’s good, and he’s consistently good. He’s currently playing the best offensive hockey of his career and close to the best defensive hockey of his career. The only thing we don’t know about him is if he can win in the playoffs with a good team. That’s because, to date, Gaudreau’s never really been part of a Flames regular season team that’s looked as strong as the Flames have this season.
If I’m asked if I think Gaudreau will re-up with the Flames, my general response is that he will. But I’m not sure of it, because the part of Gaudreau that wants to win might win out over the side of him that wants to stay. If the Flames can make some noise this (post-)season, maybe those two sides of him can be reconciled and all doubt can be dispelled.
Either way, it’ll be a very fascinating, and important, final 40 games for the Flames as Gaudreau plays out the final regular season (and potentially playoff) dates on his current contract.