Mark Giordano: a tale of two seasons (2021 year in review) By Mike W
1 year ago
Mark Giordano’s tenure with the Calgary Flames brings to mind what is, in my opinion, the best episode of network TV ever produced: episode five of the fourth season of Lost, “The Constant.”
If any of us Flames fans were to have our consciousness sent through time, in order to avoid a temporal paradox, Mark Giordano would be our constant.
When we flashback to the 2011 Chris Butler era, in order to keep our brains from short circuiting we need something familiar to anchor us… something we care about… that also exists here in 2021. That would be Mark Giordano. He keeps our collective timeline in tact just as he has helped keep this franchise in tact for over a decade.
Despite this, the lack of team success over the last few years and looming expansion draft has created an organizational crossroads with the longtime captain.
Spending assets to protect a 38-year-old coming off the toughest season of his career doesn’t seem prudent.
Legacy and emotions aside Giordano is still an important piece on the Flames blue line and, despite some rough patches this year, deleting him from the roster in a vacuum makes the on ice team markedly worse off.
On the ice, the Flames are likely a better and more competitive team with number five on the roster, even if his play has declined. It’s a very fascinating situation.
Before we get to the more interesting discussion of how the Flames may navigate the expansion situation and Giordano’s future with the club, let’s take a look at how we got here and how he actually performed this year.

Giordano’s career is truly the stuff of legend. From not being drafted into the OHL, to remaining un-drafted in the NHL, to winning the Norris Trophy at 35 and cementing himself as one the league’s premier defensive players in his mid and late 30s… fantastic stuff.
Giordano would make his way up the ranks in the organization with a few speed bumps. After a solid stint split between two seasons, Giordano and the Flames could not agree to terms and the future captain took a gamble and headed to Russia to play a season with Moscow at the ripe age of 22.
The Flames and Giordano would reunite in 2008 reaching a three year contract agreement. The rest is history. Giordano began his path to becoming an elite NHL blue liner and all time great Calgary Flame.
At 35 he became the oldest defenseman not named Nicklas Lidstrom, Al MacInnis, or Doug Harvey to win the Norris Trophy.
Giordano has been one of the best and consistent players league wide over his career. His on ice play has been matched by his contributions off the ice as well. Since 2007 he not only has a Norris to his name, Giordano is the leader in cumulative WAR amongst defensemen and 15th amongst overall skaters spanning that time period.
Evolving Hockey‘s Top 20 Skaters by Total WAR 2007-2021:
Giordano’s longevity has been remarkable.
With expansion looming, the last two years have been under the microscope and have generated much debate amongst Flames fans. We have all expected him to fall off a cliff at some point.
Despite his game improving with age throughout his career, time stops for no man. Even Batman got old and had to retire (I’m using Batman Beyond canon as my reference point here).
He wasn’t able to escape regression following his monster 2018-19 season. In the shortened 2019-20 season Giordano, along with pretty much everyone, struggled. However, he and TJ Brodie remained a pretty solid top pairing for the Flames. His offense took a nosedive, certainly, but behind his own blue line Giordano remained a legitimate top defender. 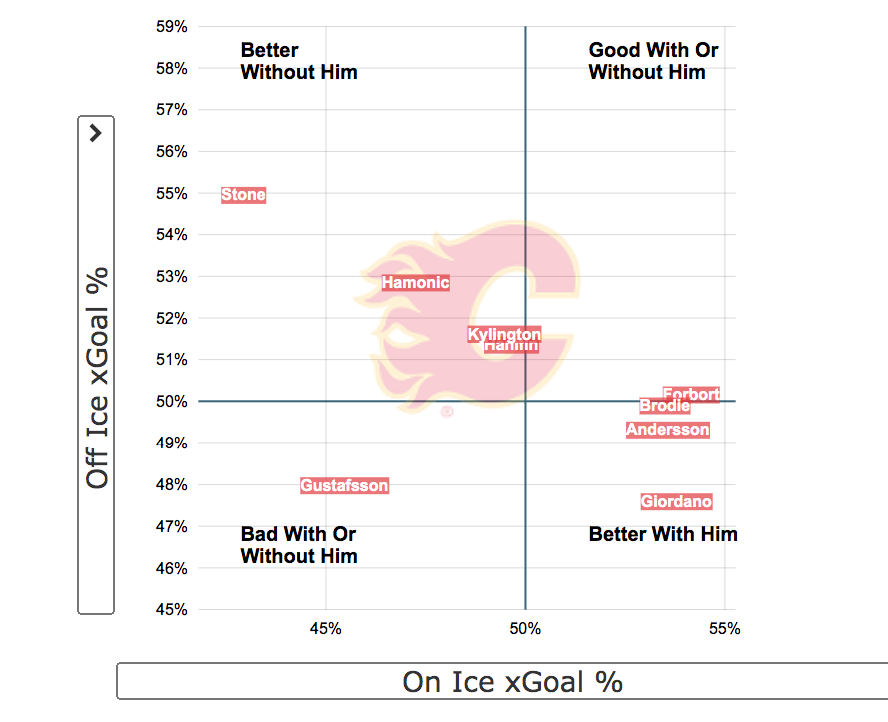 What makes the discussion interesting is that, while it was a rough year for the captain, specifically to start, looking back at his season as a whole he actually wasn’t nearly as bad as you may think. In fact, it’s hard to argue that he’s still not a valuable player on the ice. Let’s take a look.
Now, coming into this season, he was faced with being another year older and still being relied upon as the club’s number one d-man. Losing his longtime complementary partner, TJ Brodie, was also a challenge.
The cliff we all had long been concerned Giordano would fall off of seemed to be one he was dangling from with a loosening grasp in the first half of 2021.
Through the first 10-20 games of the season Noah Hanifin and Chris Tanev were holding down the fort while Mark Giordano and Rasmus Andersson were getting cratered on an almost nightly basis.
After Darryl Sutter took over and paired him with the aforementioned Tanev, however, Giordano showed signs of life.
The possession game favored by coach Sutter certainly suits Giordano’s game and his ensuing results indicated that.
5v5 Adjusted for Score and Venue. Data from Evolving Hockey
Losing Brodie hurt the captain as well. While it’s difficult to parse out how much of his struggles were related to Rasmus Andersson’s issues, Tanev’s skill set seemed to complement Giordano’s game in a similar manner to Brodie. Andersson and Giordano never seemed to be in sync this season.
He absolutely benefited from playing with Tanev but perhaps more accurately he benefited from not playing with Andersson.
5v5 Data from Natural Stat Trick
His game to game performance normalized, as evidenced below by his game score trend. Hockey Stat Cards
By season’s end you could argue he was still the team’s best overall skater on the blue line this year. Heck, using Evolving Hockey’s model he LED the team in total GAR this year. 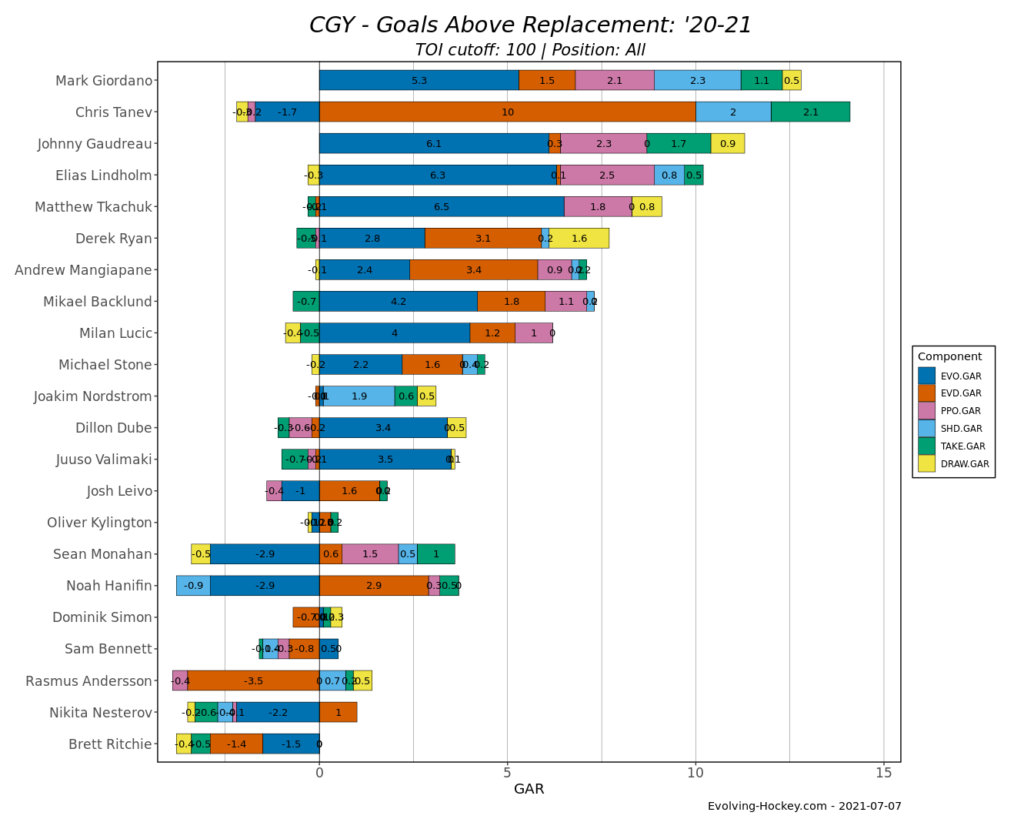 Evolving Hockey
So, despite an really rough first half, for a 37 year old, Mark Giordano still provided this team with value this year. It was far from his best and it was riddled with struggles but he still served as this team’s number one defenseman, facing top quality competition, playing in all situations, and was still a net positive skater by year end.

The most burning and pertinent question in Flames land is if the club will protect Giordano in the expansion draft. It has been a highly debated talking point since Seattle was granted an expansion team.
Should they expose him and will they expose him seem to be two distinct questions.
Should they protect him? Probably not. Despite his strong second half, Mark Giordano is still going to be 38 and in the final year of his contract (with a 19 team NTC) and showed major signs of regression early on. 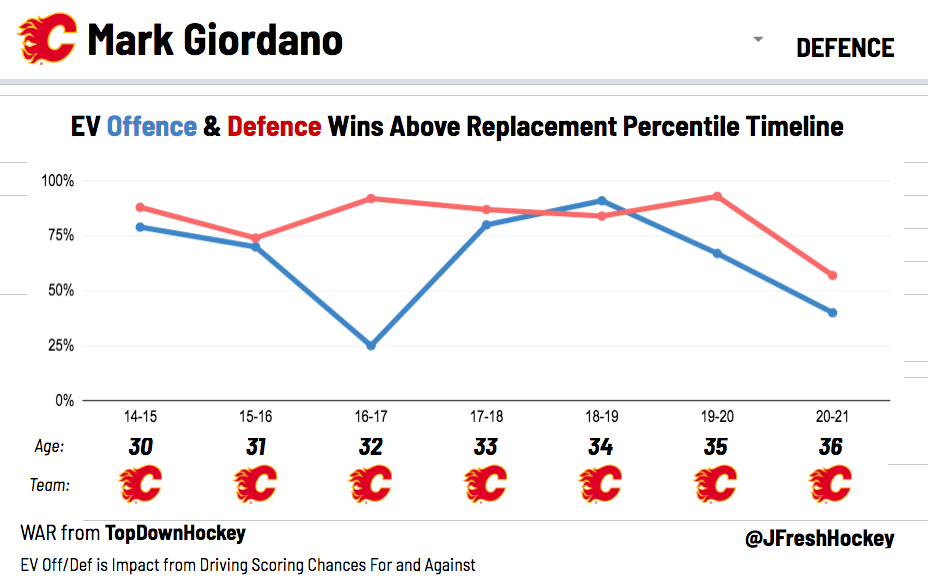 JFresh Hockey
Will they protect him? This is where the Flames have themselves an issue. A declining Giordano was STILL one of the their best players on the back end this year.
Let’s say you’re Brad Treliving and company and you lose him in expansion.
That leaves you with:
How does management reconcile possibly losing Giordano heading into a season where they very much plan on being competitive? At the same time you certainly can’t expose Tanev for the same reason of staying competitive.
On the flip side how do you reconcile throwing a sweetener to Ron Francis to keep a soon to be 38 year old on the decline?
It’s going to be hotly debated subject forever.
The manner in which Treliving and Co. handle Mark Giordano will tell us everything about the immediate direction of this franchise.
Mark Giordano is clearly still a solid NHL player who touches all areas of the game when he’s on the ice. Whatever jersey he is wearing next season, he’ll be providing value to that team. I’d love to see him retire a Flame but more than anything, I’d love for the Flames to make the best decision for the future success of the franchise.