Post-Game: Close, but no cigar against Oilers 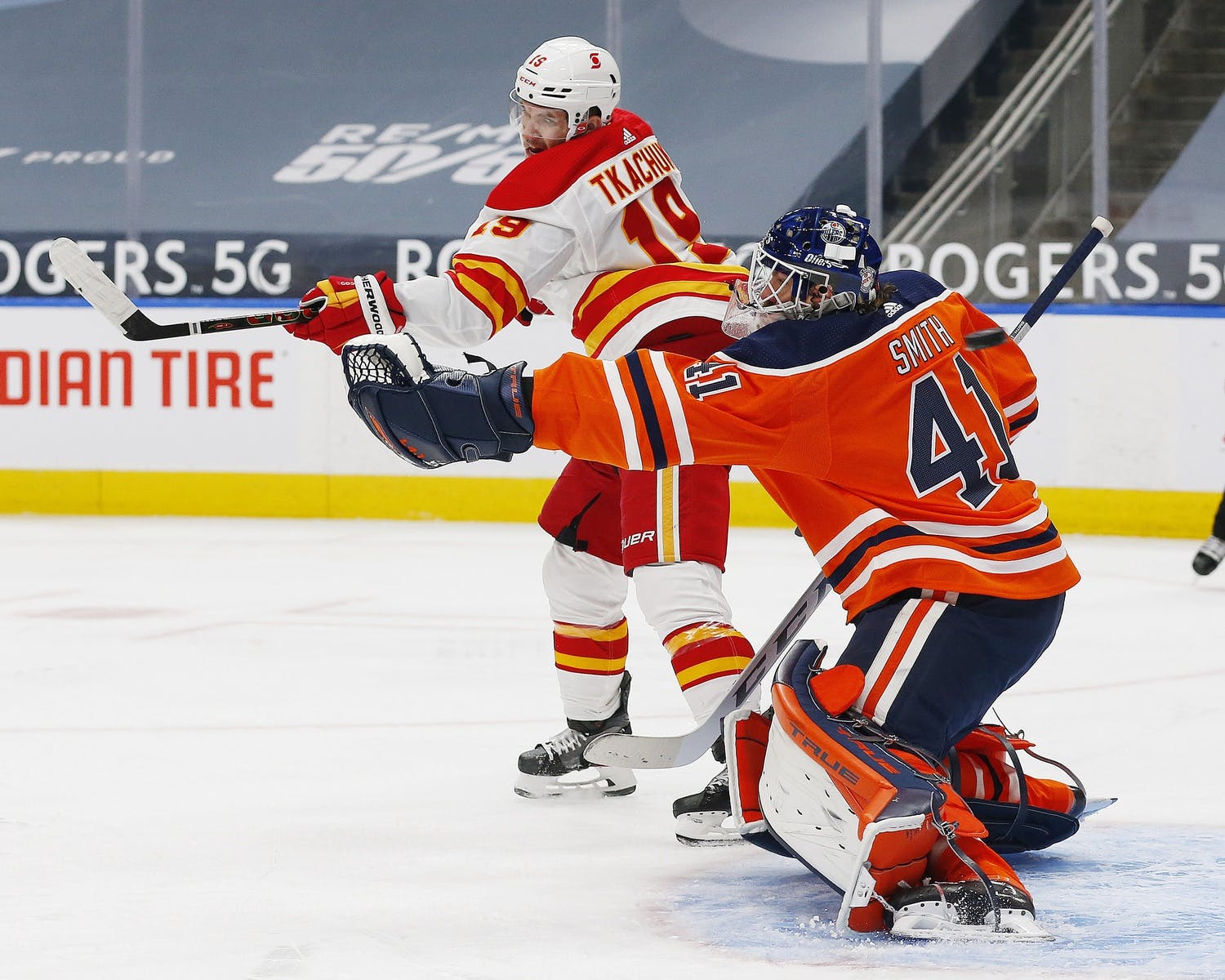 By Ryan Pike
1 year ago
The Calgary Flames played pretty well on Friday night in Edmonton. They were the better team for big chunks of the game. But penalties at the wrong times led to power play goals at the wrong time, and that was the difference in a very close 3-2 loss to the Edmonton Oilers.

The opening period saw the Flames take awhile to find their rhythm. The Oilers registered nine of the game’s first 10 shots. But after a penalty kill with Rasmus Andersson in the box, the Flames woke up and found their mojo.
Midway through the first, the Flames opened the scoring. Andrew Mangiapane cycled the puck to the point where Michael Stone uncorked a slapshot. With Milan Lucic screening Mike Smith, the puck found the net too give Calgary a 1-0 lead.
Shots were 14-8 Oilers and scoring chances 6-3 Flames in the first period.
The Oilers answered back on a power play in the early second period. Chris Tanev took a minor. The Oilers made some tic-tac-toe passes. Jacob Markstrom made the initial save, but Ryan Nugent-Hopkins jammed in the rebound to tie the game a 1-1. The goal was just 13 seconds into their PP.
The Flames got a power play later on, but it was wiped out by a Matthew Tkachuk retaliation slash on Darnell Nurse. The Flames killed off the short PP and Tkachuk was sprung for a breakaway by Sean Monahan as he stepped out of the penalty box. He beat Smith and made it a 2-1 game.
But the Oilers tied things up before the period ended. With Elias Lindholm caught up ice, the Oilers had a three-on-two rush and didn’t waste it. Some nice passing from Ethan Bear to Kailer Yamamoto to Dominik Kahun confounded the defenders and gave Kahun a tap-in to tie the game at 2-2.
Shots were 12-6 Flames and scoring chances 5-3 Flames in the second period.
The Oilers grabbed the lead early in the third period off another PP. Off a face-off win, a Connor McDavid shot trickled through Markstrom to give Edmonton a 3-2 lead. It took four seconds of their PP time.
The Oilers held on for the win. Shots were 6-5 Flames and scoring chances 3-3 in the third period.

The Flames were the better team at five-on-five and played with pace, tenacity and structure. But the difference in this game was the Flames taking too many penalties and giving Edmonton’s big guns too many kicks at the can. Take away the two Edmonton PP goals and this is a much different game – and one the gentlemen in red probably win.

He’s always good, but Mangiapane did a lot of good work on Stone’s goal and was generally good all over the place in this game.

It’s obvious, but McDavid’s go-ahead goal was a shot that Markstrom needs to have to keep his team in the game. Instead, it squirted through and with it went the Flames’ hopes for a point or two.

Mikael Backlund was out with an injury, so Tanev wore his A and served as alternate captain.
Stone’s goal was his first since Jan. 5, 2020, a span of 453 days and 13 NHL appearances.

The Flames (16-19-3) are back in action on Sunday night when they host the Toronto Maple Leafs.
Uncategorized
Recent articles from Ryan Pike