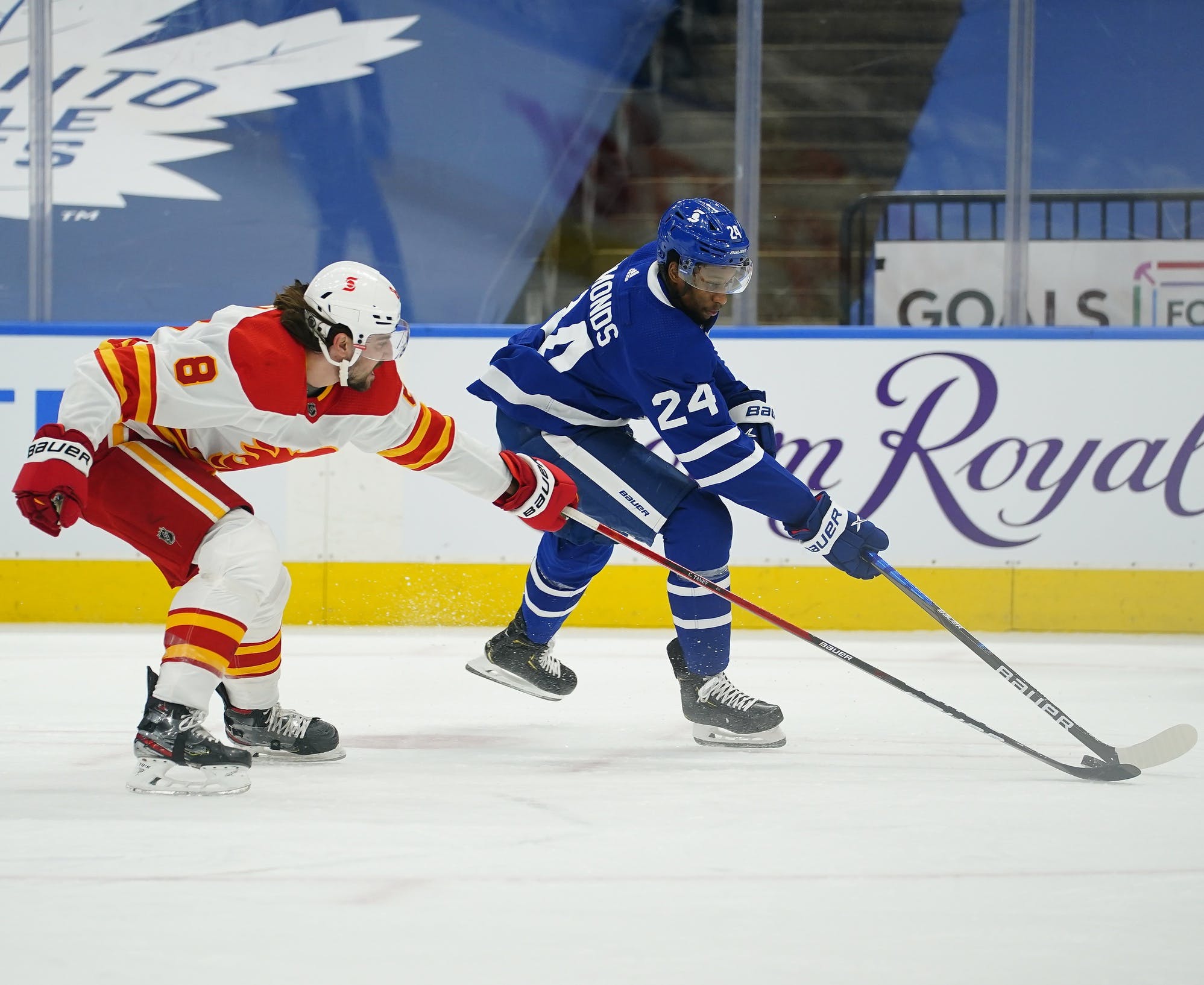 By Ryan Pike
1 year ago
David Rittich was traded to the Toronto Maple Leafs on Sunday. He flew with the Calgary Flames to Toronto on Monday. And he was good against his old team, but not quite good enough, in a 3-2 overtime win by the Flames on Tuesday night in Toronto.

The Flames looked good early and they opened the scoring. Milan Lucic made a nice play with the puck off the cycle, finding a pinching Juuso Valimaki at the side of the net for a slick redirect to give the visitors a 1-0 lead.
But the Leafs tied it up before the end of the period. Morgan Rielly’s initial shot went wide. Zach Hyman jumped on the rebound off the end boards and jammed the loose puck past Jacob Markstrom to make it 1-1.
Shots were 7-5 Leafs and scoring chances 10-8 Leafs in the first period.
Elias Lindholm drew a penalty immediately to start the second period. The Flames won the ensuing power play face-off, made some quick passes, and Lindholm buried a one-timer feed from Matthew Tkachuk past David Rittich to give the Flames a 2-1 lead.
Shots were 8-6 Flames and scoring chances 7-7 in the second period.
The Leafs pressed early in the third period and managed to tie the game up. Hyman won a corner battle for a loose puck and funnelled it behind the net to John Tavares. Tavares fed Alex Kerfoot in front of the net and his quick shot beat Markstrom to tie the game up at 2-2.
The Leafs pressed further, including getting a four minute power play after Rasmus Andersson was nabbed for high-sticking. But they couldn’t get another in regulation, and this game went to extra time. Shots were 14-12 Flames and scoring chances 10-6 Leafs in the third period.
Johnny Gaudreau made a nice deke on Rittich and scored early in overtime to give the Flames a victory (and a sorely-needed pair of points).

The Flames played pretty well overall. They were out-chanced 21-21 overall (and 10-7 in high-danger chances), but they did a nice job giving Markstrom a lane to see shots and clearing out rebounds. They played fairly well defensively, and overall just seemed to be largely calm and collected after the trade deadline.
It wasn’t a perfect 200-foot game, but it was good enough to beat a team playing for the second time in two nights.

It’s sentimental, but let’s go with Lucic. He hit a major milestone and was constantly noticeable.
Lindholm and Gaudreau both had two point nights, so they get the honourable mentions here.

The Flames allowed the tying goal early in the third period, but they did a rock-solid job of killing off Andersson’s double-minor. That penalty could’ve sunk them, but they didn’t allow it to do so.

In addition to being Lucic’s 1,000th NHL game, Mikael Backlund moved into a tie for sixth place in franchise games played (with Joel Otto) with his 730th game.
Lucic fought Scott Sabourin in the first period.

The Flames (18-21-3) are back in action on Wednesday when they face the Montreal Canadiens.
Uncategorized
Recent articles from Ryan Pike