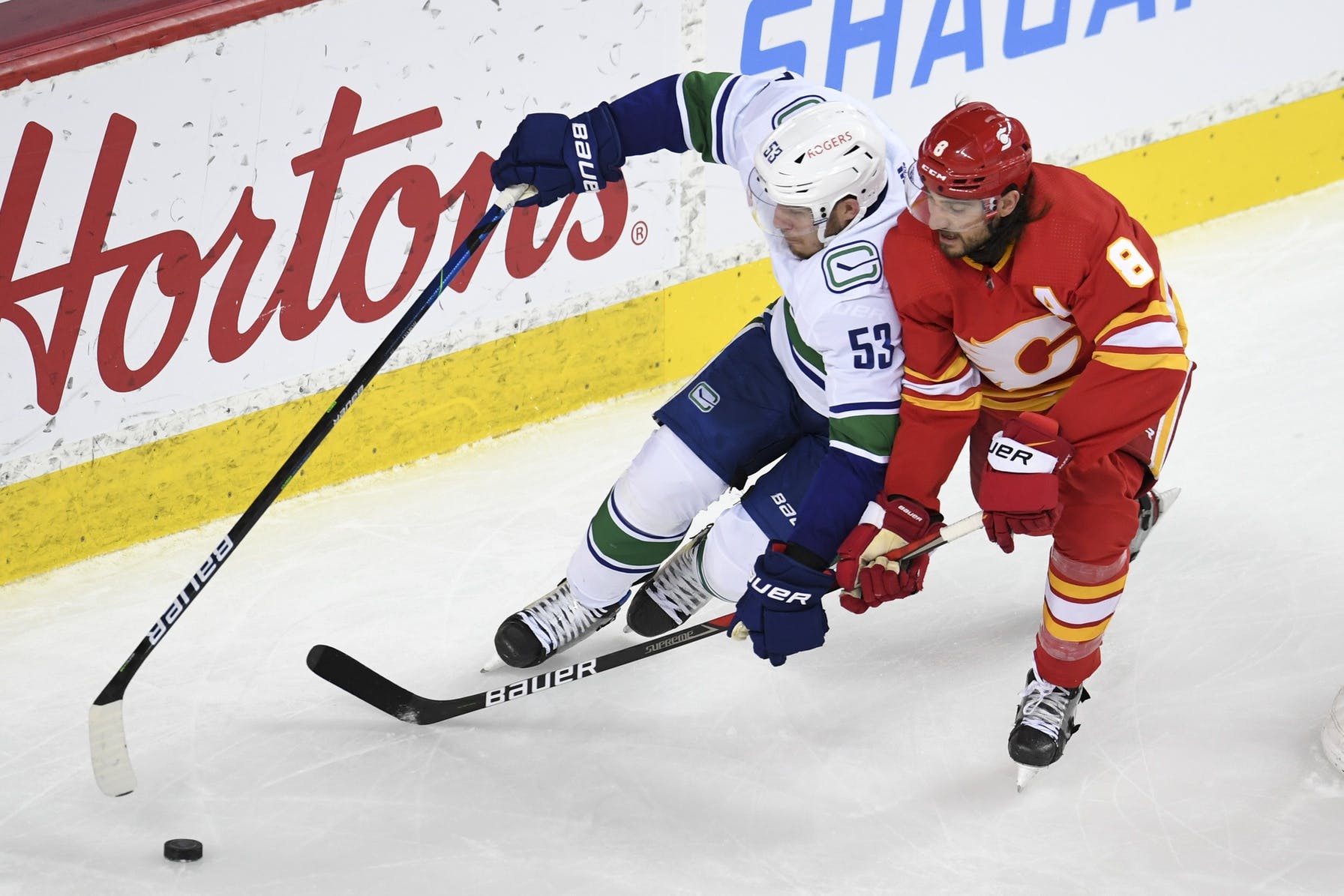 By Ryan Pike
1 year ago
The last four games of the 2020-21 Calgary Flames season are merely academic, as the team will play 240 minutes of ice hockey and try to avoid injuries. But the Flames looked pretty good on Thursday night, aside from a clunky second period, in 4-1 victory over the visiting Vancouver Canucks.

The Canucks got on the board 62 seconds in, as Freddie Highmore redirected a Travis Hamonic shot past Jacob Markstrom. That gave the visitors a 1-0 lead.
But that lead didn’t last for long. On a sojourn into Vancouver’s zone, Johnny Gaudreau was given a little time and space. Whoops. That gave him a chance to feed Rasmus Andersson, sneaking in from the point, for a quick shot that made it a 1-1 game.
Shortly after, the Flames scored again. Andrew Mangiapane, left all alone by Olli Juolevi, deflected a Nikita Nesterov shot past Thatcher Demko to make it 2-1 Flames.
Shots were 9-9 and scoring chances 7-2 Flames in the first period.
The second period featured a Canucks push, several Markstrom saves, zero goals, and Andersson and Nesterov getting stuck on the ice for three minutes. It also featured highway robbery by Demko on Oliver Kylington.
Shots were 14-10 Canucks and scoring chances 13-9 Canucks in the second period.
Elias Lindholm scored off the rush on a nice feed from Matthew Tkachuk to make it 3-1 Flames. Tkachuk scored on a late power play after his shot ramped off a Canucks’ defender’s stick and in to make it 4-1 Flames.
Shots were 9-2 Flames and scoring chances 7-0 Flames in the third period.

The Flames were a bit flat early on, and in chunks of the second period, but when they weren’t good their goaltending was. And when they were good in the first period, they were able to bury their chances.

Gaudreau was really good once again, moving the puck well and setting up chances. Andersson and Kylington were also quite noticeable, and Markstrom made some key saves at key times.

Let’s go with the bulk of the second period. The Flames gave up a bunch of shots and chances, but Markstrom was rock-solid and the club did a decent enough job minimizing additional chances. After they weathered the storm, they seemed primed for the two points.

This was Gaudreau’s 517th career game, tying him with Paul Reinhart for 18th in Flames franchise history.