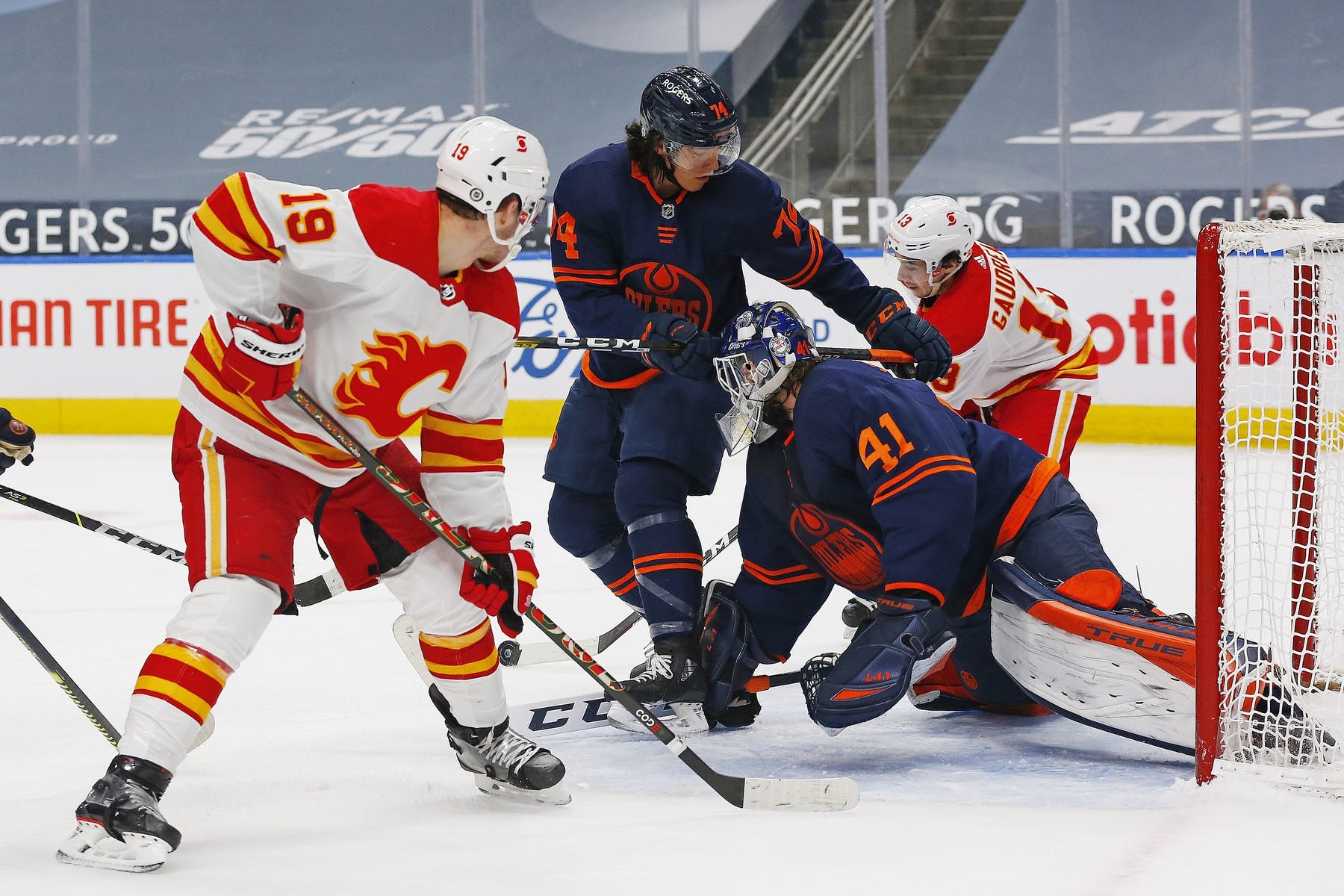 By Ryan Pike
1 year ago
Since their last game on Thursday, the Calgary Flames sat idle and watched the Montreal Canadiens win two games to push their playoff hopes to the brink. The Flames didn’t help matters on Saturday night as they lost a tight-checking game to the Edmonton Oilers by a 4-1 score.
The Flames aren’t mathematically eliminated from the playoffs, but they’re very close to that point.

In stark contrast to the tired Oilers the Flames played on Thursday, Edmonton was all over Calgary early on. Juuso Valimaki took a penalty halting a scoring chance, and on the ensuing power play Connor McDavid did Connor McDavid things. He carved through the penalty kill off the rush, eventually getting a quick shot off – while engaging with Chris Tanev – that found the far, top corner past Jacob Markstrom to make it 1-0 Oilers.
The Oilers got another one a little bit later off the cycle. They passed it around and Ethan Bear snuck in from the point to the face-off dot, eventually unleashing a one-timer off a pass from McDavid that Markstrom had no chance on. That made it 2-0 Oilers.
Shots were 10-7 Oilers and scoring chances 8-4 Oilers in the first period.
The Flames were much better in the second period, buzzing around in the offensive zone frequently but not quite burying their chances. Johnny Gaudreau had arguably their best early chance, beating Mike Smith but clanging his shot off the goal post.
But Calgary finally got on the board midway through the period. Chris Tanev sprang Matthew Tkachuk with a great outlet pass. Tkachuk’s shot was stopped by Smith, but Gaudreau swept in the rebound off his back-hand to cut Edmonton’s lead to 2-1.
McDavid nearly made it 3-1 late in the period, but Michael Stone made a leg save on McDavid’s shot.
Shots were 12-9 Flames and scoring chances 10-2 Flames in the second period.
The Flames pressed in the third period, but the Oilers did a good job of defending. Josh Archibald and Darnell Nurse scored late empty-netters to push Edmonton’s lead to 4-1 and cement their win.
Shots were 11-10 Flames and scoring chances 5-3 Flames in the third period.

The Flames just didn’t have it early on, and while they played quite well after the first 10-12 minutes, they dug themselves too deep a hole to fully climb their way out of.
They had a lot of nice scoring chances, but too often Smith saw their shots the entire way and the Flames weren’t able to create tips, screens or rebounds.

Man, Tkachuk was on tonight, and he was arguably the Flames’ most effective and engaged player. Honourable mentions to Mark Giordano, Gaudreau and Markstrom.

Let’s go with any number of nice second period saves by Smith. The Flames had oodles of good chances, but Smith managed to prevent the tying goal after Gaudreau got Calgary’s first marker.

Tkachuk’s assist was his 165th as a Flame, tying him with Daymond Langkow for 30th in franchise history.
Calgary’s tragic number is down to 2.5. Any combination of Montreal wins or Calgary losses adding up to 2.5 – OT and shootout losses for either team reduces it by 0.5 – results in the Flames being mathematically eliminated from post-season contention.

The Flames (22-25-3) are back in game action on Wednesday when they host the Winnipeg Jets.
Uncategorized
Recent articles from Ryan Pike