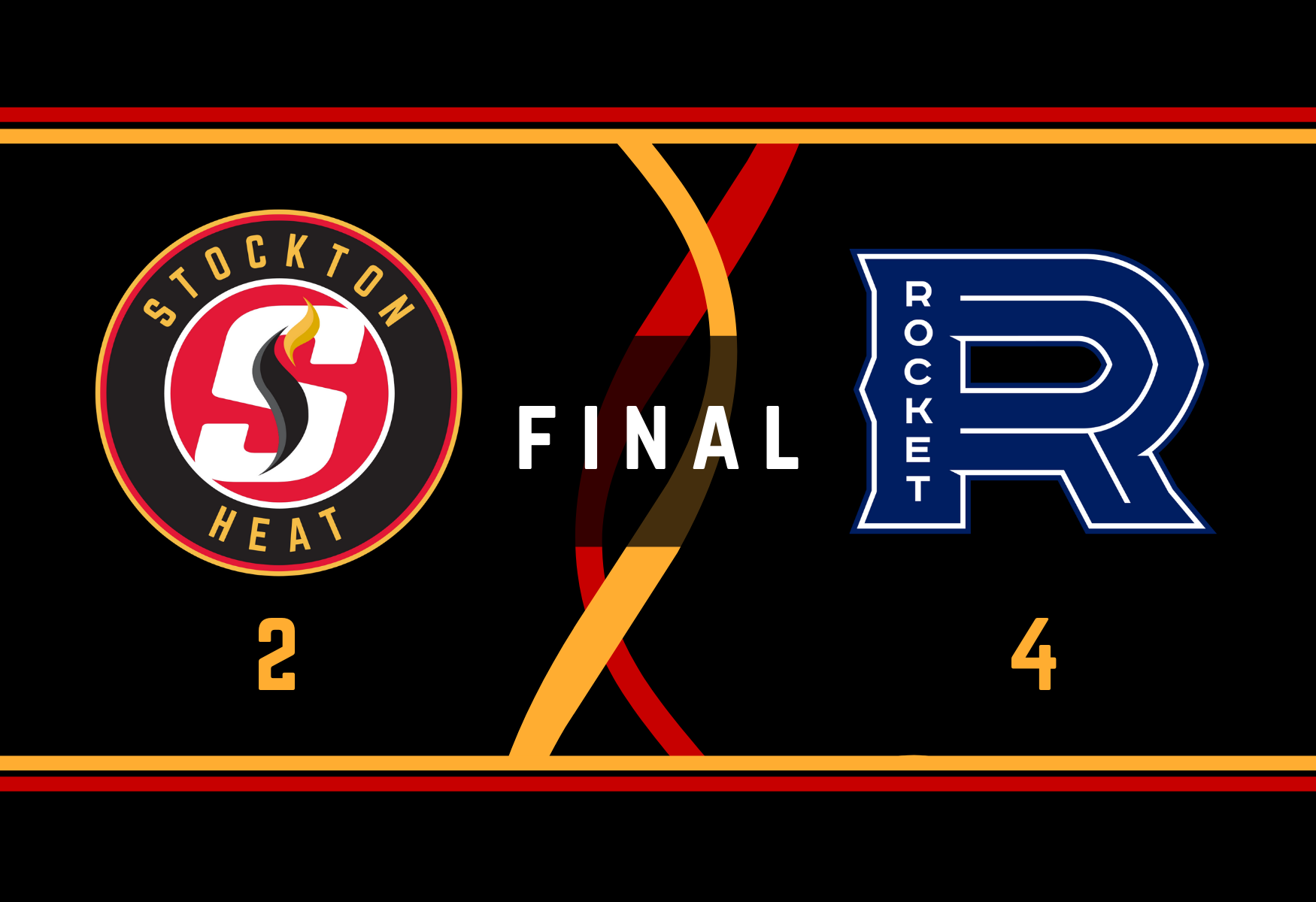 By Mike Gould
1 year ago
Get the brooms out.
The Laval Rocket have swept their four-game series against the Stockton Heat. After winning 4-3 in overtime on Mar. 18, the Rocket took 4-3 and 4-1 decisions over the weekend before concluding their Calgary trip on Tuesday with a decisive 4-2 victory.
Laval has now won its last six games; Stockton’s losing streak now sits at five contests. Prior to this recent stretch of futility, the Heat had won their last eight games.
Byron Froese and Justin Kirkland scored for Stockton on Tuesday. Heat goaltender Louis Domingue made 30 saves on 34 shots and is still searching for his first win of the season.
Jesse Ylönen scored twice for the visitors. Otto Leskinen and Jake Lucchini also contributed goals while Cayden Primeau made 24 saves.
Stockton entered this four-game series leading the Canadian Division with an 8-3-0 record. That record now sits at 8-6-1; Laval has improved to 12-4-1 and has seized control of first place. The Heat now control the second spot.

The first period of Tuesday’s game was not especially kind to the Heat. Laval outshot Stockton by a 20-8 count and forced Domingue to battle hard to keep the game close.
Early in the first period, Domingue’s posts paid their respective dues towards maintaining the scoreless tie.
Stockton ran into serious penalty trouble in the first period. Despite getting the game’s first power play opportunity, the Heat failed to convert and actually negated the advantage themselves.
Matthew Phillips took an interference penalty 1:13 into the Heat PP, setting his team up for an eventual 5-on-4 disadvantage. Stockton successfully killed the Phillips penalty but ended up taking two more before the period expired.
First, Michael Stone was nabbed for hooking at the 17:01 mark of the frame.
45 seconds later, Kirkland went off for tripping, giving Laval a 1:15-long 5-on-3. They wasted no time in making the most of it, with Otto Leskinen snapping a hard shot over Domingue’s blocker with 1:35 to play before the first intermission.
Things started to get chippy in the second period. Zac Leslie and Joseph Blandisi got into a heated, physical disagreement before the 5:00 mark which led to Laval earning another 2:00 power play.
Less than five minutes later, Heat defenseman Connor Mackey took exception to a hit thrown by Michael Pezzetta on Colton Beck and stepped in. Mackey and Pezzetta engaged in a spirited fight, with the Laval forward landing more blows.
Laval doubled its lead at the 10:47 mark of the second after a Hamilton turnover. Jordan Weal intercepted his pass, sending the puck in front to linemate Rafael Harvey-Pinard; from there, the puck made its way to Jesse Ylönen, who slammed it by Domingue to make it 2-0.
Jake Lucchini increased the lead to 3-0 in the dying minutes of the second period. Standing in the slot, Lucchini deflected a long shot by Brandon Baddock that bounced off Domingue and rolled barely an inch over the goal line.
It only took 30 seconds for the Heat to answer right back. Blandisi high-sticked Michael Stone off the faceoff directly following Lucchini’s goal, sending Stockton to just its second power play. It only took 26 seconds for the Heat to score, with Byron Froese taking a pass down low and throwing the puck upstairs on Primeau.
Emilio Pettersen took a high-sticking penalty of his own just 35 seconds into the final frame. Laval re-established its three-goal cushion less than a minute later, with Ylönen absolutely hammering a one-timer off the crossbar and into Domingue’s cage.
Stockton finally started getting more penalties called in their favour as the third period progressed. The Rocket took four consecutive penalties—including a four-minute high-sticking double minor—and allowed the Heat a chance to claw back.
Leading scorer Matthew Phillips had an excellent chance to make it a 4-2 game on Stockton’s second power play of the third.
Baddock cut Pettersen with a high stick at the 15:24 mark of the period. On the ensuing four-minute man-advantage, Justin Kirkland slapped a one-timer past Primeau to make it a 4-2 game.
The Heat failed to score on the back half of the power play and ultimately fell by a 4-2 score.

Once again, the Heat allowed the first goal of the game. They did so in all four games against Laval (and lost each one).
Stockton’s top duo continues to run ice-cold. Matthew Phillips has been held pointless over the last three games; Adam Ruzicka has no points in five contests and last scored a goal 10 games ago.

Justin Kirkland was all over Tuesday’s game. He led Heat skaters with four shots on net and contributed to both the team’s goals.
The 24-year-old Camrose product skated next to Byron Froese and Eetu Tuulola on Stockton’s best line at even strength but he did most of his damage with the man-advantage. Kirkland set up Froese’s power play goal in the second period before one-timing a CJ Lerby feed past Primeau late in the third period.

The Heat are heading on the road! They’ll be playing a back-to-back set in Ottawa against the Belleville Senators on Mar. 26 and 27. You can catch those games on AHL TV; I’ll be posting updates on Twitter at @miketgould.
Uncategorized
Recent articles from Mike Gould