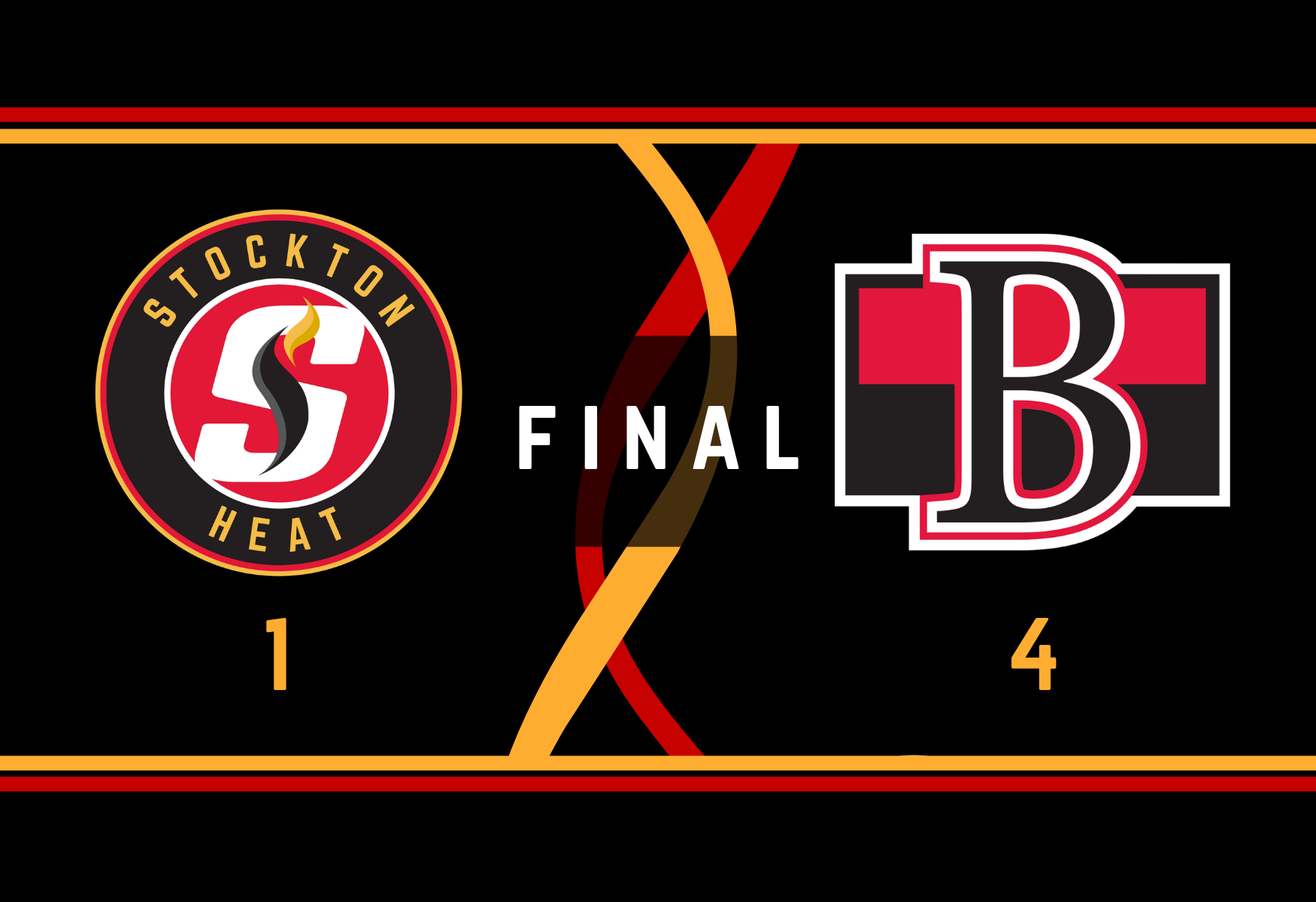 By Mike Gould
1 year ago
Even with a reinforced lineup, the Stockton Heat still lost to the Belleville Senators on Saturday afternoon by a 4-1 score.
Adam Ruzicka, Dominik Simon, and Alex Petrovic all played for the Heat on Saturday after being assigned to the AHL by the Flames earlier in the day.
Yan Kuznetsov made his AHL debut, skating on a defensive pairing with veteran professional Zac Leslie. Tyler Parsons also returned to the Heat lineup but spent the entire game on the bench as the backup for Garret Sparks.
Giorgio Estephan scored the lone goal for Stockton (10-14-1), which fell to fifth place in the Canadian Division with the loss. Jonathan Aspirot, J.C. Beaudin, Colby Williams, and Joseph LaBate tallied for Belleville.
Sparks made 10 saves on 13 shots in the loss. Filip Gustavsson put forth an excellent effort at the other end, stopping all but one of the 29 shots he faced.

Ruzicka made his presence known very early in his return to the Heat lineup. He crushed Senators defenseman Colby Williams with a check from behind at the 7:55 mark of the opening frame, sending the Heat to the penalty-kill.
The visitors managed to capitalize on their first man-advantage. Belleville sophomore defenseman Jonathan Aspirot fired a low shot from distance towards Sparks that managed to elude the goaltender and find the back of the net.
Parker Kelly and Angus Crookshank assisted on Aspirot’s third goal of the season.
Later in the first period, with the game in a four-on-four situation, Heat winger Matthew Phillips had an excellent opportunity to draw his team even.
Phillips zoomed forward with the puck off a neutral zone face-off and managed to break into the attacking area on an odd-man rush. He walked in tight against Gustavsson and fired a shot that glanced off the goaltender before heading wide of the net.
After going without a single power play in the first period, the Heat had two 5-on-4 opportunities in the middle frame. Eetu Tuulola drew the first one by jumping into the rush while shorthanded and using his physicality to create space for himself.
The Heat failed to score on the power play but they did find a goal in the second period at even strength.
After a scrum along the boards in the neutral zone, Heat winger Emilio Pettersen emerged with the puck and fed Giorgio Estephan with a pass. Estephan wired a wrister past Gustavsson to knot the score.
The tie would soon unravel. Just 1:44 after Estephan’s goal, Senators centre J.C. Beaudin tipped a centring pass by Curtis Douglas overtop of Sparks to re-establish Belleville’s one-goal lead.
Sparks allowed another goal on a wrist shot from distance in the dying minutes of the second period. This time, Colby Williams had a lot of room to walk in with the puck to give his attempt more momentum.
Williams’ wrister beat Sparks above the glove, giving the Belleville defender his second goal of the season. Crookshank and Aspirot recorded the helpers.
Stockton outshot Belleville by a 13-4 margin in the second period and continued on that rate in the third, recording 11 of the frame’s 14 total shots.
The Heat had four consecutive power play opportunities to close out regulation time and failed to score on any of them. Pettersen put forth some good work to draw the third of those chances, skating end-to-end with speed and forcing Joseph LaBate to slash him.
LaBate ultimately got the last laugh, scoring into Sparks’ vacated crease late in the third period to seal a 4-1 Senators win. Stockton outshot Belleville 29-14 in the game but failed to solve Gustavsson on a consistent basis.

Their power play struggled to convert. The Heat went zero-for-six on the man-advantage in Saturday’s game while allowing the Senators to get on the board first with a power play goal of their own.
Sparks also needs to be better. He probably wants at least one, if not more, of those goals back. It’s entirely possible we see Tyler Parsons in net when Stockton faces off against Manitoba on Thursday.

Emilio Pettersen had a strong game, recording a primary helper and drawing a penalty.
After starting the season with nine points (four goals, five assists) in his first nine games, Pettersen since has just one goal and two helpers in 15 games. He’s also only taken 31 shots in 24 games this season.
That said, Pettersen is a first-year AHL player on a very young team with an extremely inconsistent record. He only just turned 21 on Apr. 3 and clearly has a ton of talent.
It’s been a tough season for him, at times, but he’s getting back on the right track. Stockton didn’t have many dangerous players on Saturday, but Pettersen certainly ranked among their better ones.

The Heat will take a few days off before heading to Winnipeg for the start of a season-ending five-game stretch against the Manitoba Moose. You can catch the first game of that series, which will take place on Apr. 22 at 5:00 pm MT, on AHL TV; I’ll be posting updates on Twitter at @miketgould.
Uncategorized
Recent articles from Mike Gould