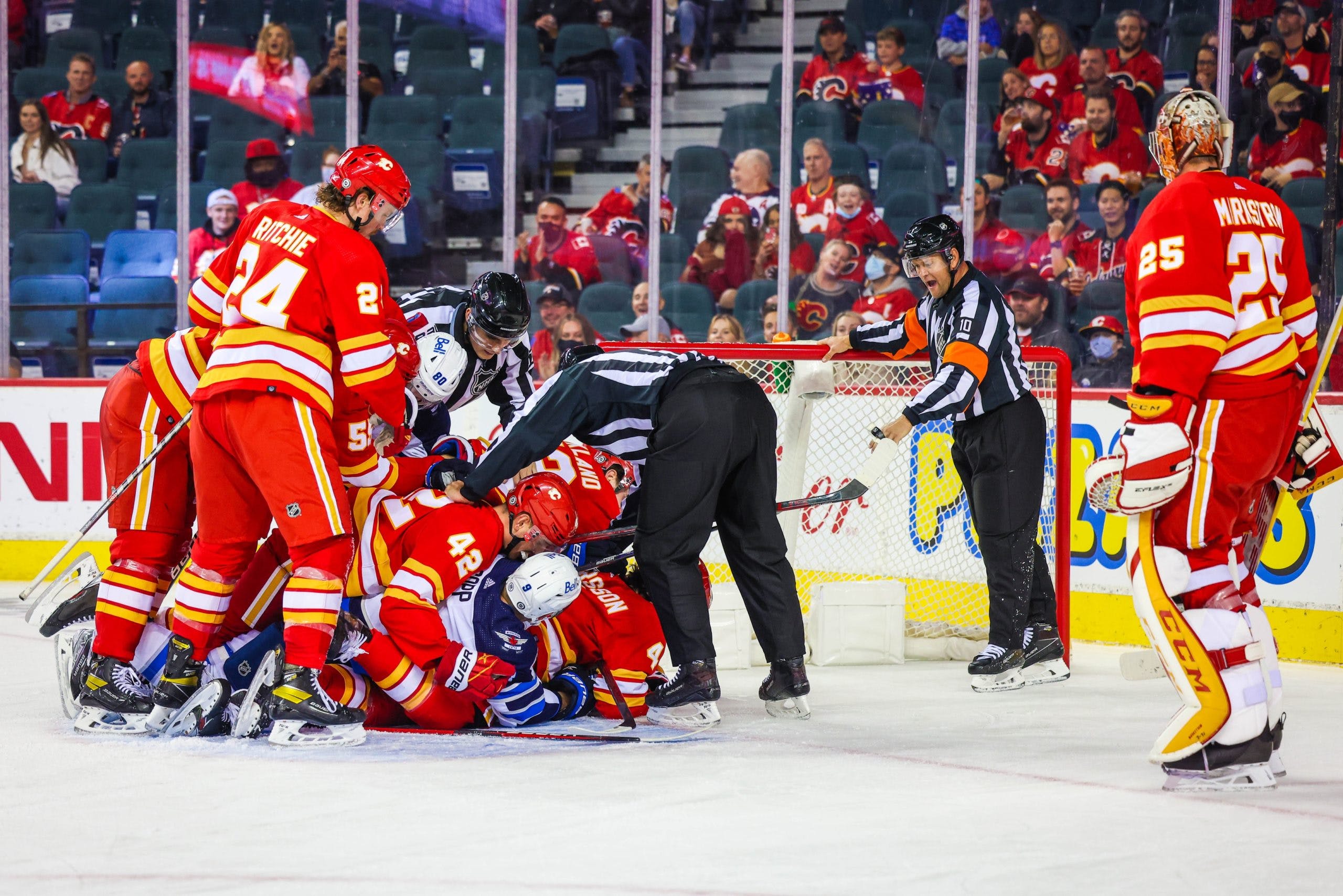 By Ryan Pike
1 year ago
The Calgary Flames were missing a few NHL regulars, but they looked very much like what we expect from their full-strength line-up on Friday night. The Flames capped off their exhibition schedule with a 3-1 victory over the visiting Winnipeg Jets.

The Flames got out to a good start and were rewarded. Andrew Mangiapane was hauled down on the opening shift, drawing a penalty. On the ensuing power play, Mangiapane accepted a pass from Johnny Gaudreau and chipped the puck past Connor Hellebuyck to give the home side a 1-0 lead.
Later on in the period, the Flames’ power play struck again. This time, Rasmus Andersson’s point shot from the top of the zone was blocked and bounced around the blue paint. Elias Lindholm claimed it and passed it to Sean Monahan at the top of the crease for a nifty redirect and a 2-0 Calgary lead.
Shots were 8-8 in the first period.
Neither team scored in the second period, but the Flames seemed content to simply clog up the ice and frustrate the Jets up the middle. Shots were 10-8 Flames in the second period.
Logan Stanley broke up the shutout attempt midway through the third period. Stanley used Trevor Lewis as a partial screen, and his shot from the side of the face-off circle eluded Jacob Markstrom to cut the lead to 2-1 Flames.
But just 76 seconds later, the Flames answered back with some really nice passing, culminating with Gaudreau feeding Lindholm on the rush for a quick shot off the right wing side that got through Hellebuyck to make it 3-1 Flames.
The Flames held on for the victory.

Well, they were much better than the Jets on special teams. And at even strength, the Flames were quite good: the Jets had the Corsi edge, Flames did a great job preventing high-danger chances, cluttering up the ice and generally not giving the Jets a ton of meaningful, dangerous puck possession.

Rasmus Andersson had three assists and showed flashes of the defenseman that the Flames hope he’ll be this season.

The Flames had a goal in the first 40 seconds of this game. For a group that’s not traditionally all that great early in games, that was huge.

The Flames have to cut down their roster to a cap compliant 20-to-23-man team by 3 p.m. MT on Thanksgiving Monday. They begin their 2021-22 regular season schedule with a Battle of Alberta clash with Edmonton next Saturday evening.
Uncategorized
Recent articles from Ryan Pike