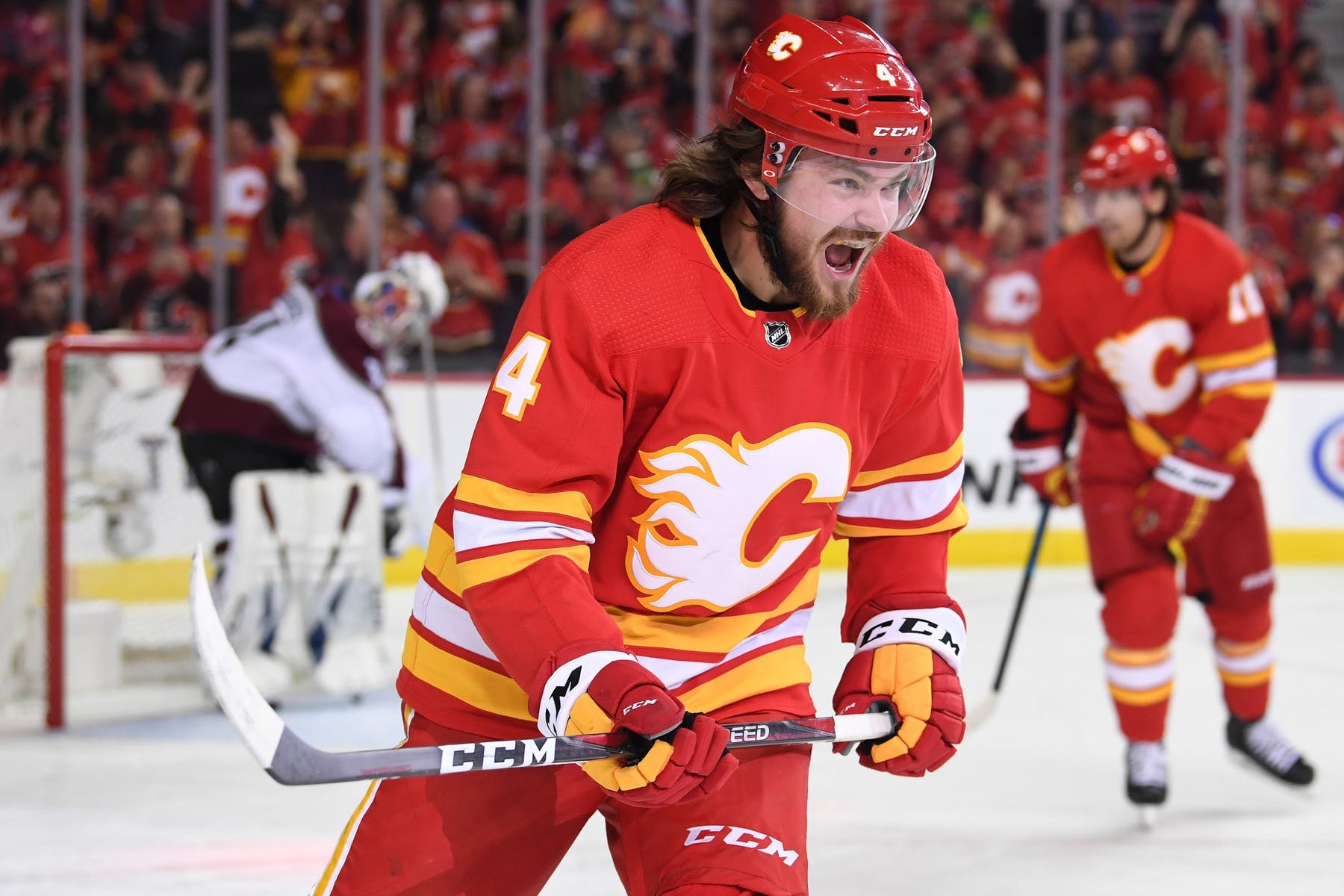 By Mike W
1 year ago
Looking ahead at the 2021-22 season there were some question marks on the blue line as it pertains to the Calgary Flames.
Mark Giordano would be a year older, Chris Tanev was coming off a tough season and top pairing stalwart TJ Brodie was lost to Toronto in free agency. Rasmus Andersson seemed a solidifying factor in all of this.
He had proven himself as a budding defensive force earning a six year commitment from the Flames. He had specifically impressed by stabilizing the second pairing with Noah Hanifin in 2019-20 and showing promise as top pairing skater with Mark Giordano in a limited sample. The team was depending on Andersson to help fill the hole left by Brodie and deployed him as such to start the season.
It did not go particularly well as Andersson struggled mightily in his new top pairing role. He and Giordano never seemed a great fit and Andersson had difficulties adjusting to being relied upon to do the heavy lifting against top competition each and every night.
I assumed Andersson would be getting media attention for his breakout campaign this season. Instead, the most noise he made was due to his puck stealing antics.

Andersson played most of his hockey growing up with Malmo in Sweden before being drafted by Barrie in the 2014 CHL Import Draft.
Following his first season with the Colts, in which he tallied 64 points, Andersson was selected in round two of the 2015 NHL entry draft by the Flames (with the pick Brad Treliving snagged in the Sven Baertschi trade).
He turned pro in 2016 suiting up for Stockton in 54 games. Following criticism of his conditioning at development camp the next season from the general manager, Andersson responded strongly putting together a solid season with the Heat (39 points in 56 games) and earned some playing time with the big club.
In 2018-19 Andersson emerged as a solid young defensive anchor on the third pair and even earned some time with Mark Giordano in the latter half of the season. He cemented his place as a building block for the team the following season. Most notable was his ability to elevate and stabilize the Flames’ second defensive unit when Travis Hamonic was lost to injury.

Heading into 2021 it seemed likely Andersson would continue to progress and slide naturally into a permanent top unit role. His defensive numbers were solid, he showed the ability to elevate the game of his teammates the year prior (with Noah Hanifin), and was ripe with youthful bravado and confidence in his abilities. The only question left was if he could perform to the same degree under tougher deployment. Going from solid depth defensemen with solid underlying numbers under favorable conditions to legitimate top pairing blueliner was perhaps a lot more difficult than we or the team thought. Andersson just couldn’t handle it this season.
If we take a look under the hood we find that most of Andersson defensive metric rates spiked in the negative direction this season. This drop off is concurrent with playing tougher minutes and seeing far less favorable zone starts.
(5v5 Data from Natural Stat Trick)
According to Natural Stat Trick, per 60 minutes no Flames skater was on the ice for more high danger chances against than Andersson at even strength. A stark contrast to the year previous when he had the lowest high danger chance against rate amongst Flames defensemen and ranked second on the team as a whole at 5v5.
The even strength defensive drop off was marked, especially considering his defensive impact had been quite strong the previous two seasons. (Wins Above Replacement Player Card from JFresh Hockey)
Using MoneyPuck’s model Andersson also sported the worst relative expected goals for percentage. For much of the year the Flames were a better team with him not on the ice. 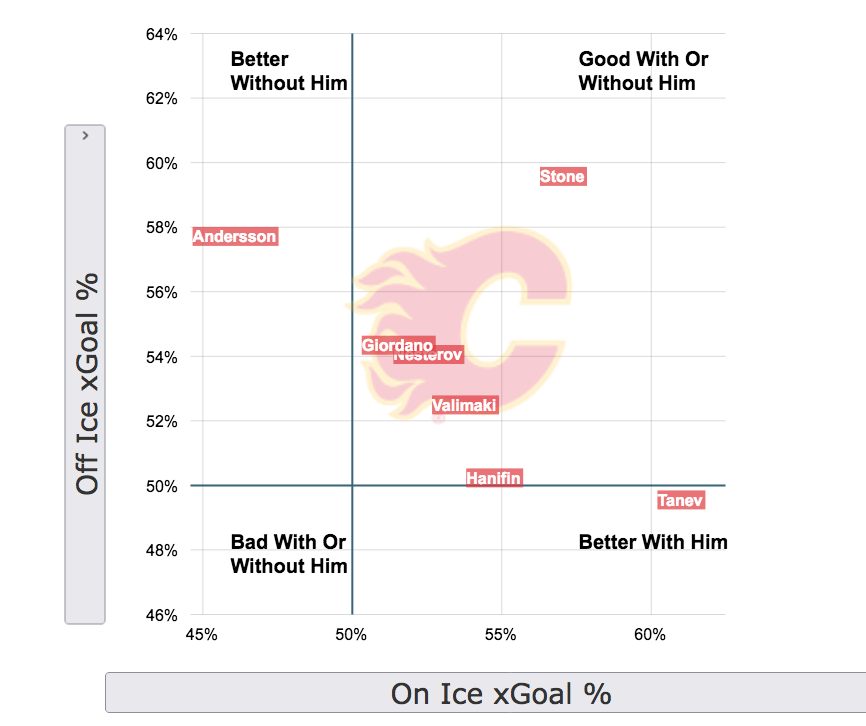 (5v5 On Ice vs Off Ice xGoal Chart from Moneypuck)
In terms of offense his counting stats were slightly higher than his career average (pro-rated he would have set a career high) but it was a letdown to see him struggle to make the most of being given the point slot on the top power play unit, one which he ultimately was relieved of.
I’m not sure what to make of Andersson’s notable decline in play this season. He was initially tasked to play top pairing minutes with a defensive partner, who also struggled to start the year, so perhaps we can chalk it up to the simple fact he wasn’t ready for the role and Giordano wasn’t a strong fit as a partner.
Had Noah Hanifin remained healthy I’d like to think he and Andersson would have returned to form as part of a solid duo behind Giordano and Tanev but he never really found solid ground this season.

The soon to be 25 year old is certainly still a building block of this Flames team for the foreseeable future. Regardless of how the expansion draft shakes down, Andersson is going to be relied upon in a top 4 role next season. They need him to bounce back in a huge way. Hopefully, this year is a blip on the radar.
The Flames need Rasmus Andersson to bring the ‘boom’ in 2021-22.