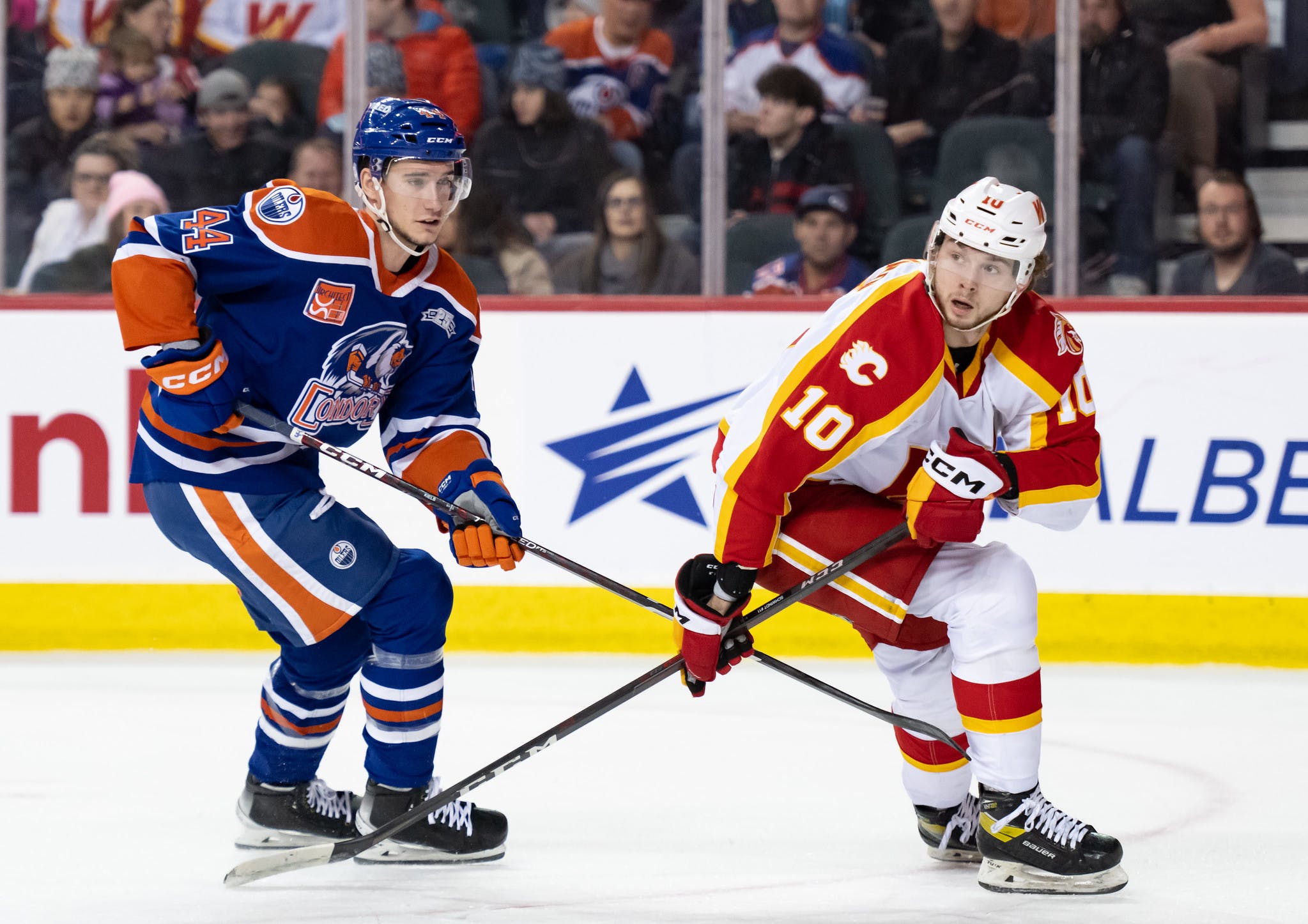 By Paige Siewert
25 days ago
The Calgary Wranglers kicked off their first game of their AHL Battle of Alberta series against the Bakersfield Condors on Sunday afternoon. Dustin Wolf got the start and the lineup was looking quite a bit different than the last time they played. Even with a bunch of changes to the lines, the Wranglers pulled out a 2-1 win.

If you missed Saturday’s call-ups, Jakob Pelletier and Walker Duehr have gone up and joined the Flames in Chicago. To backfill the lineup a bit, the Wranglers called up Rory Kerins, Matt Marcinew and Ilya Nikolaev from the ECHL’s Rapid City Rush. Only Kerins and Nikolaev made it into the lineup for this game.
Other notes show some maintenance or nagging injuries other Wranglers players are dealing with. Here’s a rundown from FlamesNation managing editor Ryan Pike.
Lineup regulars such as Martin Pospisil and Clark Bishop stick out as injury-related while Josh Brook slides into games where he can and Marcinew is an extra body that has not played a game with the Wranglers so far.
Jeremie Poirier was a different story. Head coach Mitch Love updated the media post-game saying that Poirier’s absence from the lineup is more performance-based as he is a young player in the league and still learning what it takes to be a pro.

The Condors seemed to control most of the zone time through the first 20 minutes. They outshot the Wranglers the entire period. Despite this, the Wranglers were the ones to score first. On the first Wranglers penalty of the game, Dennis Gilbert took a seemingly harmless shot around the blue line as they were entering the zone and scored 8:29 into the opening frame.
This shorthanded goal was the only goal in the first and the first shot for the Wranglers in the game. The Condors kept peppering Wolf with shots but he was turning them away to hold down the Wranglers’ lead. This lasted for about 17 and a half minutes when the Condors got on the board.
Dustin Wolf was beaten by a tip-in by James Hamblin. At the end of the first period, the game was tied up at one and the Condors led in shots 12-3.
The second period didn’t have a whole lot of action compared to the first. Only one early Condors penalty made up the special teams for the entire period. Each team took their share of shots on each other’s goaltender but no scoring action ensued until very late in the period.
At 19:16 into the second, Matthew Phillips got up on a partial breakaway off a feed from Ben Jones and scored a top-shelf goal to give the Wranglers a 2-1 lead. Ilya Solovyov also picked up an assist on Phillips’ 20th goal of the season. This ended up being the game-winner.
The Wranglers had a lead going into the second intermission but trailed in shots 23-14. The third also started out pretty slow. This game didn’t have as much of a Battle of Alberta feel to it as these teams aren’t super close in the standings and the game was kept so close that any additional fighting, penalties or momentum shifts could be detrimental.
They finished up their game against their biggest home crowd of the season of 6,146 with a 2-1 win. The Condors ended with the lead in shots 36-23. Only two penalties were called a side in this game so not a lot of special teams action. Three stars went to Dennis Gilbert as the third star, Ben Jones as the second star and Matthew Phillips as the first star.

This mini Battle of Alberta continues into the week and will finish up on Tuesday night. Puck drop is set for 7:00 p.m. MT. This will be the last Wranglers home game for a bit before they hit the road for the weekend to play the Henderson Silver Knights.
News
Recent articles from Paige Siewert