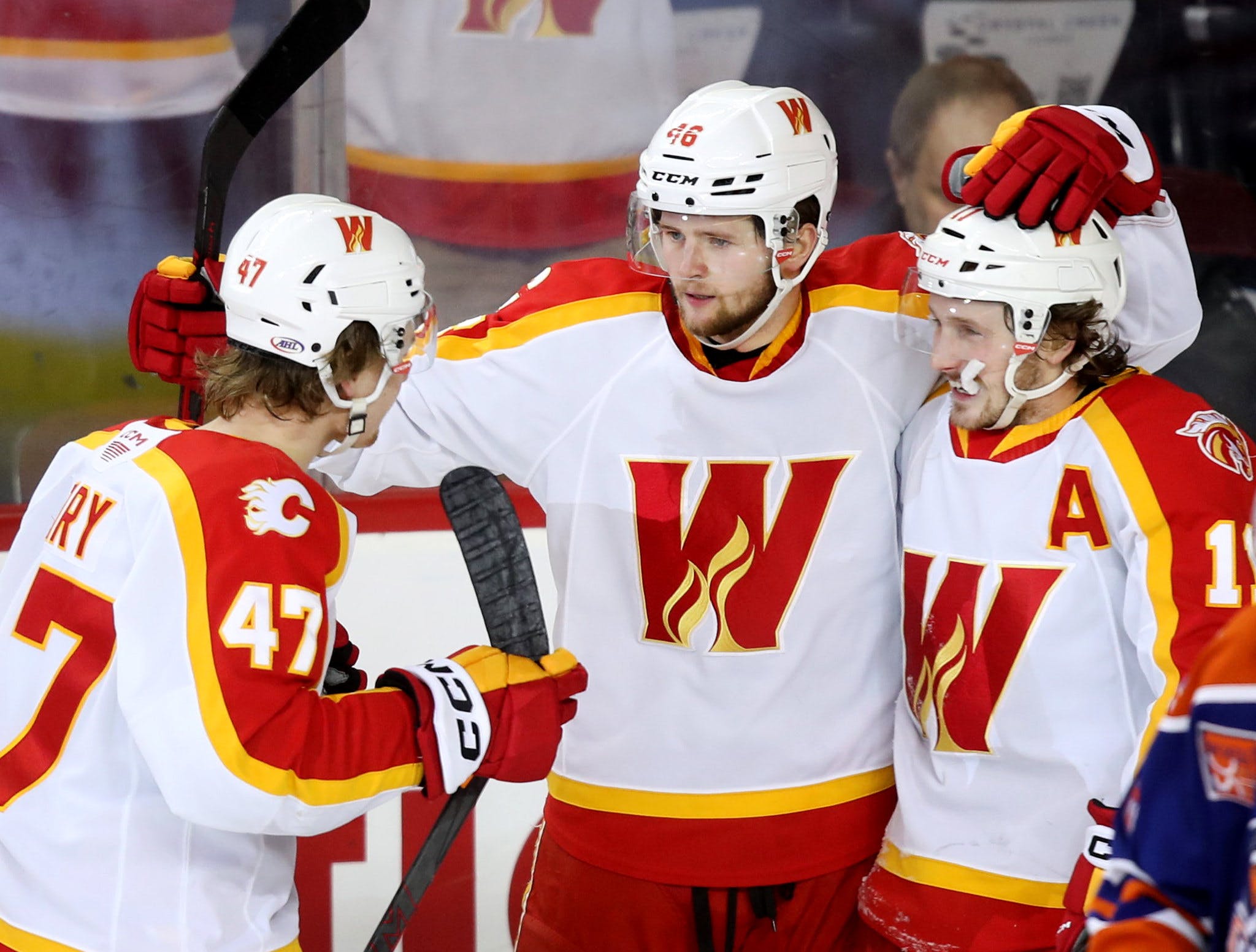 By Paige Siewert
15 days ago
The AHL battle of Alberta series came to a close on Tuesday’s match-up between the Calgary Wranglers and Bakersfield Condors. It was a tight back and forth game that really didn’t show a dramatic edge for either side. It wasn’t until the last two minutes that Matthew Phillips scored the go-ahead goal that would go on to be the game-winner. The Wranglers keep their perfect season series record and win this game 4-3.

Out of the Rapid City Rush call-ups, only Ilya Nikolaev slotted in the lineup for the Wranglers in this game. Rory Kerins did not crack the lineup in this game. A significant return to the lineup was Jeremie Poirier. According to Wranglers head coach Mitch Love, Poirier missed the last two games on a performance-based healthy scratch.
Poirier didn’t make a super bold return but also didn’t do anything to hurt his cause either. No points for the 20-year-old defenseman but he did register four shots and a +1 rating.

Dustin Wolf continued his perfect run against the Condors, getting the start in this game as well. Unfortunately, he would be the first goalie to be scored on 13:41 into the first period. Mitch McLain answered back before the end of the period with his eighth goal of the season 17:44 into the first. McLain has quietly made a large impact on this team with six points in his last eight games with the Wranglers.
Before the opening 20 came to a close, the Condors struck again to take back the lead going into the first intermission. Through one period of play, Calgary outshot Bakersfield 13-6. In the second, it was a pair of goals from the Wranglers that would earn them their first lead of the game.
First up was Emilio Pettersen, who scored on a beautiful play assisted by Matthew Phillips and Connor Zary. This assist brought Phillips up to another AHL milestone of 200 career points.
Connor Zary would be the next to score late in the period with just 40 seconds to go in the second. Dennis Gilbert ripped a shot from the blue line and Zary buried the rebound. Ben Jones also earned an assist on Zary’s 11th goal of the year.
The Wranglers finished the first ahead 3-2 and leading 28-12 in shots. In the third, the Condors scored an early goal 3:03 into the period to tie things up for the third time this game. The aftermath of this goal quickly caused some emotional boil-over with Cole Schwindt getting tied up in a tilt with Raphael Lavoie.
After that, both teams had a common goal to be the next team to score. Thankfully for the Wranglers, they were the successful ones. Matthew Phillips tucked one past Olivier Rodrigue with just 1:48 to go in regulation and scored the game-winner. His seventh game-winner on the year to be exact. Another league category he leads in now by two game-winning goals.
Even with seven goals scored in this game, none of them occurred on the special teams or in an empty net. Dustin Wolf once again held things down and shots ended 30-20 in favour of Calgary.
Three stars went to Matthew Phillips first, Connor Zary second and Emilio Pettersen as the third star.

That does it for the battle between the AHL affiliates of the Calgary Flames and Edmonton Oilers for now, but they’ll be back at it in early February. After a solid homestand, winning three of four games, the Wranglers hit the road for the weekend to face the Henderson Silver Knights. The first game of their next series will be on Friday night at 8:00 p.m. MT and Saturday’s game will be offered for free on AHL.TV for their free preview weekend.
News
Recent articles from Paige Siewert